Home  »  Original Articles   »   Yin and Yang: The psychology of balance – by Maryam Sadiq 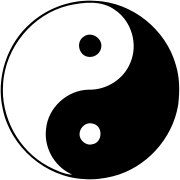 Why is it so difficult for the battle within ourselves, or within our homes, to end in a draw? Must it always be(pun intended) ‘plus ca change, plus c’est la meme chose’?
“According to Chinese philosophy of the time, there existed an invisible, intangible¬ world influencing the empirical world of human events. Despite the emphasis of rational Confucianism on logic, order, and decorum in determining the fate of Men, and though superstition and magic were continually assaulted by the government, most Chinese people saw the world as a delicate interplay and balance of primal forces – Yin and Yang.
The stability of natural and man-made worlds was dependent on the constant harmony of these two principles. Yang, the male principle, is fiery, bright and overt. It is associated with the dragon that glides through water and the intense sun and flaming pearl that penetrates the clouds. It is open, forceful and violent. Yin, the female principle, is dark, covert and mysterious. It is associated with water, cloud, and shadow.
In the natural world, a drought would be considered an overabundance of Yang; floods and heavy rain, an excess of Yin.
In the political world, too much Yang could result in violent upheaval and use of force; an imbalance of Yin means dangerous female influence; subterfuge¬, scandal, clannish conspiracies among matriarchs, consorts and empresses that would result in mysterious assassinations.'(Court of the Lion – E Clooney and D Altieri).

Lord Krishna of the unforgettable Maha Bharata referred to this ‘land with mystical beginnings’ as ‘Far Chine’. (Samraj – E Aron). A system of matriarchy without checks and balances may collapse too, but these words ring true indeed.The implications of the Yin and Yang theory on the psychology of men and women may just be this – that the most fundamental essential philosophies behind Oriental history, culture, religion, government and business are Yin Yang theory. This is one of the oldest cosmologies in all of human thinking. People have been using this understanding of life for over 5000 years. We can’t be sure of its historical ‘timeline’ as archaeological evidence can document only around 5000 years at present. Yin Yang theory works with the premise that all of life stems from a point of perfect balance. On either side of that balance one has the left and the right, the wet and the dry, the night and the day, the female and the male, the negative and the positive, multi-faceted, single goal focused, and so on. According to this theory, everything that one can think of can be placed somewhere on the yin or yang aspect to the line. Behavior, time of day, seasons of the year, kinds of food, colors, everything. Yin is the capacity to be receptive. Yang is the capacity to be creative. Yin/Yang is the concept of duality.

Women’s bodies are more Yin and men’s bodies are more yang. Women get unhealthy when they are not good at being receptive, because they are not utilizing their primary energetic trait, which is receptivity. Men become unhealthy when they do not utilize their gifts of contribution and creativity, which are their primary energetic traits.

When a woman is spending most of her life force, her vitality and time, giving to others, she is probably going to end up sick, weak, unhappy and, eventually, unproductive. Yin energy moves from the outside in towards the self. Mothering, which takes up decades of our adult lives, is, in large part, about contribution. It’s about giving in creative, structured ways. These are more Yang oriented activities. They are not about receiving.
It is therefore imperative that a woman seeks a situation, for they are not necessarily forthcoming, that allows her to receive support from others during her mothering years. She needs love, kindness, appreciation and support. She needs to be taken care of if she is going to be good at taking care of others. If there is no balance, if a woman becomes a chronic giver or a ‘martyr’ , her body will break down and she will become more masculine. Her relationships will suffer, especially her relationship to a man who needs to be more masculine than she is. Her spirit will suffer, her kids will not get the benefit of learning about healthy femininity and she will feel that she is “losing herself”. This is happening to many many women at any given time in a system that is nowhere near approaching matriarchy, and for all that mothers, wives, sisters and daughters, aunts and grand-mothers should be given support, it is nearly always assumed that they all of them need help.

When a man is “self oriented” rather than “other oriented”, when he puts emphasis what is given to him rather than on what he contributes to others, when he is silent and avoiding of his woman’s aggressiveness, “wimping/copping out”, so to speak, he is not, in the view of many, utilizing his primary strength. Yang energy moves from the self outward in direct, goal -oriented ways. When a man behaves in a childlike way (women often call their husbands the “other” child), when he doesn’t take a stand for his creativity, his vision, his beliefs or his drives, he sacrifices his yang nature, his greatest truth.Unfortunately, men too are given very mixed messages by women who want both a strong hero and a girlfriend-like partner to chat and vent with. Men have been labeled brutish in their sexuality and lack of emotional expression but are also being criticized for expressing weakness or being emotionally vulnerable. Self sacrifice and accomplishment are good for men and they would be wise to devote themselves to pursuits’ that enable them to give and to feel the joy of surmounting challenges in reference to giving. Men need to know they have impact, influence and a positive effect on others in the best sense. They need to leave their mark, to have made a difference. Too many men do not recognize the value of behaving in inherently masculine ways. The more feminine they become, the sicker their bodies and the weaker their spirits. The more they execute and complete with success, the better for everyone. Learning to live within one’s true strengths may allow for greater physical health, deeper intimacy and more pleasant relationships.

Most importantly, parents need to ‘have each others backs’. Literally and figuratively. Tragically too many parents are caught up in either becoming or showing everybody else that they’re parents. It is simply not enough, as both demographics and divorce and custody debacles indicate, to become a mother or become a father. One has to BE a mother or a father, regardless of their own disharmony, for the disharmony may be within their own selves, and they simply can’t come to terms with it. Children are blameless and require much introspection, as well as perhaps retrospection, from parents. Or the disharmony and divides will continue. Enough said.

Maryam Sadiq is a freelance writer and a satellite activist.