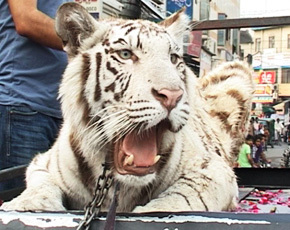 LUBP Editor’s note: The following article published in Dawn deconstructs how foreign journalists based in Pakistan are either naive or incompetent; some of them also happen to uncritically promote pro-establishment politicians.

BBC’s Owen Bennett-Jones wrote an article recently that serves as a public relations exercise for Saudi-backed pro-Islamist politician Nawaz Sharif. Apparently Bennett-Jones ‘personally’ verified the health of the tiger in question (insensitively used by Maryam Nawaz Sharif in her political rallies, Maryam in turn is promoted by Raza Rumi on social media as an emerging star) without realizing that he was being shown a different tiger.

Similar tricks were used by the ISI media cell led by Najam Sethi as caretaker minister in 1997 when they recruited BBC to do a defamatory documentary against Benazir Bhutto and Asif Zardari (The princess and the playboy) to facilitate Nawaz Sharif’s dubious landslide victory in 1997 elections. Deja vu in 2013!

The “Sher” might have vanquished all the others in the May 11th elections, and the “Lion of the Punjab” might be all set to form the next government, but please, can we now retire this election symbol out of respect for these innocent, wild animals? I think they have been exploited enough already by a political party that doesn’t know the difference between a lion and a tiger and seems to have no respect for endangered species.

First of all, the PML (N)’s official election symbol (that appeared on the ballot paper) is that of a Bengal Tiger, which are NOT lions but tigers. The Bengal Tiger is an endangered species with fewer than 2,500 left in the wild (mostly in India, Bangladesh and Nepal). They are no longer found in the wild in our part of the subcontinent – the last known Bengal Tiger in Pakistan was shot dead in 1906 near Bahawalpur, according to British records.

You can, however, find them in zoos and some private facilities in the country where they are supposed to be used for educational purposes, and certainly not for political campaigning!

The white tigress that was paraded during PML(N) rallies in Lahore in the run-up to the elections (and which allegedly died or mysteriously came back to life) had recessive gene mutation. The white tiger is a recessive mutant of the Bengal Tiger. https://lubpak.com/archives/262921

Now that election fever has subsided and it is no longer a politicised issue, I decided to dig around and find out the truth behind the case of the missing white tigress – a story that had gone viral in the days leading up to May 11th. Was the white tigress used in PML(N)’s campaigns still alive and healthy? Or had she in fact passed away?

The white tigress first came to the public’s notice when she was brought to the University of Veterinary and Animal Sciences (UVAS) in Lahore on May 7th 2013. She was exhausted, and in fact severely dehydrated. In the last few days leading up to May 11th, the temperature in Lahore had reached 40 degrees Celsius and the young white tigress had been dragged to many of the PML(N) rallies, often being chained in the open back of a Vigo. The tigress belonged to the family of former PML(N) MNA, Mian Marghoob, who owns a large farm in Mehmood Booti in Lahore. In his compound are three other tigers – two are orange-coated Bengal tigers and there is one more white tigress, a large female called Sandy. 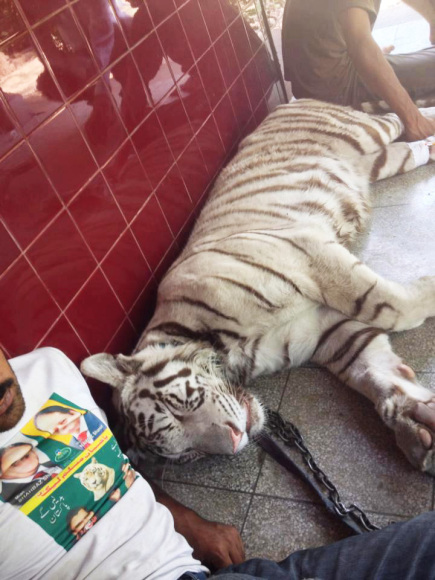 UVAS has a pet center, an open facility where people can bring in their pets for treatment. The vets there diagnosed a more serious condition: pulmonary effusion (water in the lungs). They gave the white tigress intravenous therapy and noted that she looked seriously underfed, with a shrunken face. Since they could not keep her overnight, as they don’t have those kinds of facilities, after a few hours they sent her back to Mehmood Booti with her keepers. Later they were pressurised to say to the media that the tigress was not seriously ill but “in good health”, merely suffering from a cough. A photo, however, was taken of the listless white tigress lying on the floor while at UVAS. That was when word got out to the media that the tigress was very ill and weak, and probably dying. Journalists began calling up Mian Marghoob and his relatives, Mian Idris and Mian Zia, inquiring about the tigress. The owners of the tigress, panicking at the thought of a media trial focusing on the poor treatment of the tigress and the embarrassment of the PML(N) election symbol “dying” before May 11th, came up with their own strategy. 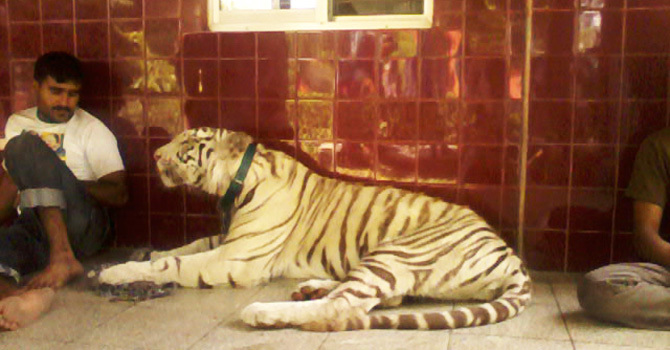 They invited a well-known journalist [Owen Bennett-Jones] who works for the BBC to visit Mehmood Bhooti and see for himself that the tigress was in fact alive. The journalist, who saw the older white tigress Sandy padding up and down in her concrete and mesh den reported that: “after seeing the tiger in its den, the BBC can confirm it is still alive. It is in fact in rude good health”. The BBC journalist had no idea that there were in fact TWO white tigresses owned by Mian Marghoob’s family and never asked to see the smaller one. He never asked to be taken to the facility in the back of the compound where the sick (and perhaps dead) tigress was being kept.

There is in fact, a simple way of verifying if the smaller white tigress is still alive and well. According to WWF Biodiversity Director Uzma Khan, “Every tiger has a different pattern of stripes on it, just like humans have different fingerprints, so if that tigress is still well and alive, why don’t they bring it over or send fresh pictures to the WWF?” She says she can identify the smaller tigress from a distinctive triangular mark on her left hind leg.

The stripe pattern analysis is actually enough to identify if she is indeed alive or dead. All that is needed is a recent picture to compare with the one that was taken at UVAS. The BBC took pictures of Sandy, the bigger tigress, and they can easily compare her stripes with the picture of the smaller white tigress at UVAS. This might be all the proof we have, since Mian Marghoob’s family is now saying that the smaller tigress will no longer come out to take part in rallies.

But perhaps the bigger issue is not whether she is still alive or dead, but that the tigers at Mehmood Booti and other wild animals used during PML(N) campaigns – there were 3 lions on a truck on MM Alam road during a victory rally just a few days ago – are kept in poor conditions, paraded around and probably drugged during rallies. The lions on MM Alam road were being goaded to roar by sticks during the victory rally. “These are not domestic animals, they are wild animals with wild instincts and they cannot cope with all the loud sounds and mistreatment at rallies”, explains Uzma Khan.

She points out that under the CITES (Convention on International Trade in Endangered Species of Wild Fauna and Flora) guidelines on the “Acquisition and Management of Big Cats in Captivity” which were approved by the Ministry of Climate Change in 2011, it is prohibited to take big cats to public places in a cage or a leash. She adds, “CITES says in order to import a big cat you have to ensure proper care”. Wildlife farms that have licenses for keeping and breeding wildlife have to be monitored carefully by wildlife officials who should visit the facility regularly to ensure that it is up to the mark. “Captive animals are supposed to be used for public education, so that people can learn about conservation”.

They are certainly not supposed to be used for campaigning purposes, and it is really pathetic that they are being used as an election symbol to make some of our political leaders look more fierce and aggressive. In disgust, the activist and animal lover, Feryal Gauhar filed a writ petition in the Lahore High Court last week seeking to uphold the CITES guidelines. The court has called WWF-Pakistan to appear as an expert organisation, along with other organisations like the Punjab Wildlife Department. The first hearing has taken place already and the next hearing will take place at the Green Bench in Lahore headed by Justice Mansoor Ali Shah tomorrow. The complainant would like to see a ban on displaying big cats in rallies and improvements in private facility inspections. The Election Commission of Pakistan will be called as well since they are the ones who agreed to awarding the “sher” as an election symbol in the first place.

If our newly elected political leaders really want to prove that they are wiser and more civilized this time around they should stop their followers from abusing these wild animals. 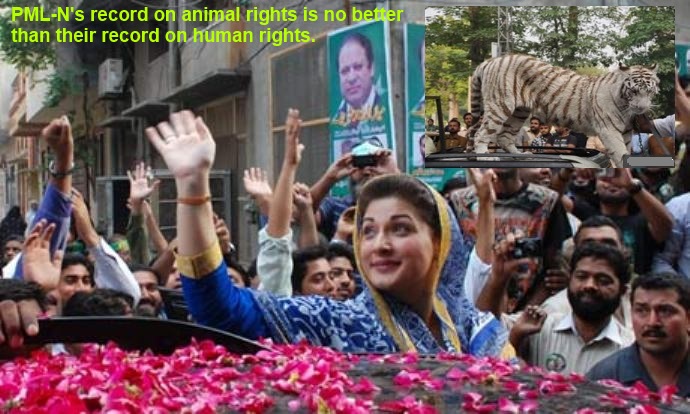 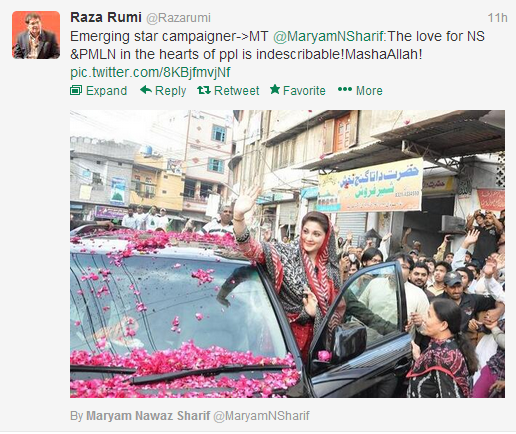