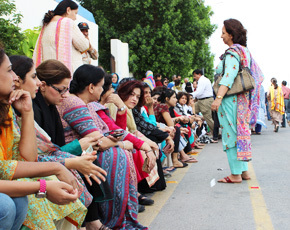 In the 2008 elections that were boycotted by PTI and its parent organization, Jamaat Islami, PPP’s Ikhtiar Baig was leading the polls at the time of closure. The rival contestant was Khushbakht Shujaat. Both candidates are urban-educated and well respected in their communities. Ikhtiar had a clear edge due to the cosmopolitan nature of the constituency. Like many of Karachi’s constituencies, the demographics of NA 250 represents people from diverse ethnic and class backgrounds. These are normally areas in which PPP thrives.

Closing polls showed Ikhtiar Baig with a clear and winnable lead. However, within the next 24 hours, PPP lost not just NA 250 but two other constituencies to the MQM. It was projected to win all three and was leading till close of polls. Some hue and cry was made and there were substantial allegations that Ikhtiar Baig might even have been attacked. However, in the end, PPP surrendered its claims in the larger interests of forming a national consensus government.

These politics of reconciliation and consensus do not appeal to our drawing room moralists and facebook revolutionaries that form the PTI cohorts today. However, these politics reflected ground realities and after a decade of military dictatorship, Pakistan could not afford to derail the transition to democracy. As always, the PPP sacrificed for the larger good.

Karachi has gone through hell in the last five years with MQM in the coalition. This would have paled in comparison with MQM on the outside looking in. A very important factor that always weakens PPP is the clear bias they face from the media and civil society. Until the recent second wind of the PTI in the months leading up to the current elections, significant sections of Karachi’s civil society settled for MQM as a realization of their bourgeoisie fantasies.

The elephant in the room is the fact that there are different standards for the PPP and MQM. One can slander and abuse PPP and its Bhutto and Zardari leaders to their hearts content and not fear any reprisals. MQM, to put it mildly, does not take too kindly to criticism and exposure.

In this backdrop, the new electoral player on the block, the PTI does seem to bring out another element of latent bourgeoisie fascism which might counter the latent ethno-fascist sentiment that appreciates MQM.

If MQM thought that they could get away with rigging in 2013 just as they did in 2008 and before, they were in for a rude shock. Thanks to the PPP giving full freedoms to a rabidly biased media, the landscape is not the same as it was in 2008. In 2008, Facebook was still new and Twitter was still evolving. Between technology and the legacy of a liberal PPP government that allowed full media freedoms, MQM’s recent efforts to rig NA 250 have been thoroughly exposed by PTI/Jamaat Islami and civil society.

It is a story for another day that the pre-poll rigging by the Judiciary, ECP and Taliban that went against MQM, PPP and ANP did not elicit even a fraction of the same outrage as MQM’s rigging in NA 250. However, two wrongs don’t make a right and the fact that this rigging has been exposed is a positive sign for the future. For PPP supporter’s, this election represents many moral victories even if it may not lead to an electoral victory. It gives the PPP a chance to reevaluate itself while also letting someone else (PTI?) take on the task of governing Pakistan.

Most importantly, it shows the way forward. Now PTI will have to grasp the reality that governing a country like Pakistan is not the same as mocking those who have sacrificed tremendously to create and maintain an evolving democracy. Let them come to grips with the MQM in Karachi whose electoral presence is nearly double that of their actual demographical vote bank. NA 250 is an important part of this lesson.