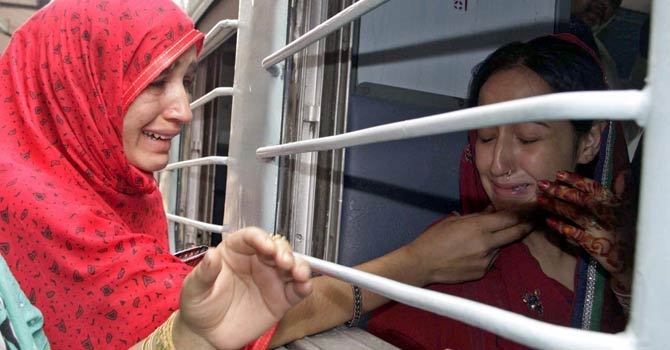 A Hindu woman weeps while seeing off a relative at the railway station. – Photo by INP

KARACHI: Officials in India’s western state of Rajhasthan say around 919 Pakistani Hindus there have become eligible to apply for Indian citizenship, according to a report published by the Deccan Chronicle on Friday.

The administration from Rajhasthan’s Jodhpur area says the Pakistanis have become eligible for Indian citizenship after spending seven years in the country. The people included in the list are those Pakistanis who had traveled to India prior to December 31, 2004 and refused return to their home country.

“As per our record, these 919 Pakistani Hindu nationals have completed seven years of their stay in India, the basic eligibility to apply for citizenship,” the newspaper quoted  additional magistrate of Jodhpur, Rajendra Singh Rathore. “We have asked them to follow the procedure and if they fulfill all conditions, including fees, they will be granted citizenship.”

The news follows media reports earlier this month of hundreds of Pakistani Hindu nationals from Sindh allegedly migrating to India on concerns of religious persecution and security fears. A committee was formed by President Asif Ali Zardari to look into the reports of mass migration. However, the committeerejected the claims that members of the minority community were leaving Sindh.

Hindu Singh Sodha, president of the Seemant Lok Sangthan, an organisation for Hindus from Pakistan settled in India, told the BBCUrdu that the list issued by the Indian government was “too short”.

“According to our information, there are 7,000 Pakistani Hindus in Rajasthan, who came from Pakistan on valid travel papers and refused to return,” he said.

In March 2005, Indian authorities had granted citizenship to over 8,000 Pakistani Hindu nationals settled in Rajasthan and Gujarat states. According to reports, the Hindus included those who had came to India on valid travel papers from Pakistan, citing ill-treatment on religious grounds as the reason for their refusal to go back.