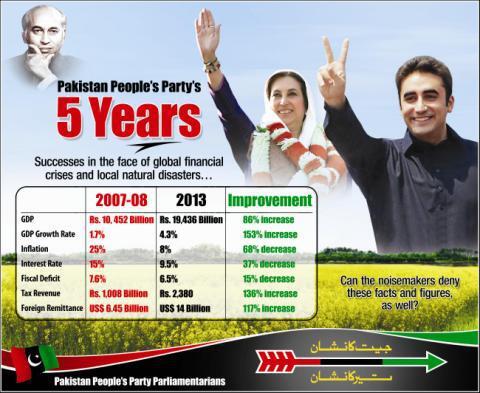 The present post is based on various media reports, independent analyses and also official report published by Pakistan Peoples Party (released in March 2013) that offers an overview of the party’s five year performance, highlighting major achievements during 2008-2013 as ruling party in Pakistan.

– Constitutional reforms, including restoration of 1973 constitutions in its original form, enactment of the 18th, 19th and 20th amendments which provided provincial autonomy, transfer of presidential powers to parliament, smooth installation of caretaker governments and striking down of president’s power to dissolve the assemblies.

– Self autonomy granted to the Election Commission of Pakistan

– Tough and clear stance against terrorism. Operation in Swat despite opposition by Taliban and pro-Taliban political and religio-political parties. Military operation in tribal areas.

– Important decisions and steps taken by the PPP government to mitigate sufferings of the people despite terrorism in the country. Record increase in wheat production, increase in salaries of govt officials up to 158 percent, disbursement of Rs 70 billion among 7.5 million deserving families through the Benazir Income Support Programmed and financial help to 135,000 deserving people by Pakistan Baitul Maal.

– Politics of reconciliation, no political cases or trials of political opposition

– A number of steps were taken by the PPP government for welfare of the masses, eg, resumption of trade union activities, distribution of shares among 500,000 industrial workers, cheep tractors to farmers through Benazir Tractor Scheme, increase rural economy from 50 billion in 2008 to 800 billion rupees in 2013

– Development projects, eg, the Faisalabad-Multan Motorway and construction of thousands of kilometres of roads.

Reinstatement and Regularization of Employees