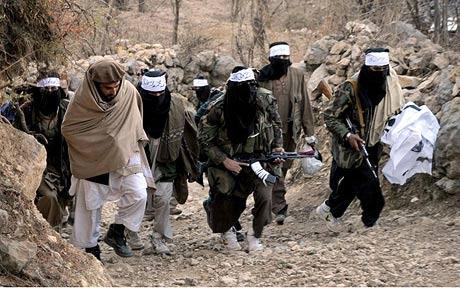 “AL QAEDA hardly exists here,” he said, “and what are called the Taliban are [our] own tribal people. The more we kill them, the more militants we produce.”

Thus spoke PTI leader Imran Khan to BBC’s Islamabad reporter Orla Guerin as she accompanied him on his campaign trail towards the end of April. The prime ministerial hopeful’s stance on the Taliban is well known but his denial of Al Qaeda’s presence here was surprising.

In the past, he has received briefings on issues of national importance such as ‘memogate’ from security agency officials and it wouldn’t have been difficult for him to ask such officials for information before making such a categorical assertion.

Al Qaeda apparently exists in Pakistan’s lawless and largely ungoverned tribal areas and the country’s security establishment is aware of this. In fact, data compiled by a number of agencies demonstrates that a large number of committed cadres of the terror group are based here.

For example, two years after the killing of Osama bin Laden in Abbottabad, his former deputy Ayman al Zawahiri is said to be either in the tribal region or in the border areas in Afghanistan. He runs an operational command network from Fata of top Al Qaeda men who number in the double digits.

Zawahiri, now the Al Qaeda chief, may now be more focused on developments in Iraq and Syria but retains several hundred, mostly Arab, fighters on Pakistani soil dedicated to operations within Pakistani territory. These fighters work hand in glove with the Tehreek-i-Taliban Pakistan and its affiliates such as the Punjabi Taliban.

The names, including those of two sons-in-law of Zawahiri, and nationalities of the various people who form the apex group and fill various key positions such as finance, bomb-making, trainer, chief screener, courier etc are known.

There is evidence to suggest that Al Qaeda is not only present in Pakistan and in the Afghan border areas in its close proximity but also loosely guiding the terror group’s campaigns in Iraq, Syria, Libya and even in some of the African countries from here.

Another group said to be several hundred-strong and aligned to Al Qaeda, TTP and the Afghan Taliban, is the Islamic Movement of Uzbekistan led by Abdul Fattah Ahmadi based in North Waziristan. Its erstwhile amir was Tahir Yuldashev who was killed in South Waziristan.

The IMU possesses some of the deadliest fighters, most of them from the Ferghana valley but it also has a number of Westerners in its ranks such as two of the main commanders, said to be Germans of Afghan origin.

Several other groups belonging to militant Islamic movements in different countries and seen as Al Qaeda affiliates are also based in Pakistan. At least privately security officials confirm this. Even then the PTI leader denies the presence of Al Qaeda in Pakistan.

But it isn’t Imran Khan’s fault that the TTP is threatening to alter the outcome of the May 11 elections. The terror group has been given much space by the ambivalence towards it in the top echelons of the security establishment and elsewhere.

The fear of, even if not support for, the terror group is so compelling that key national leaders, hoping to lead the government following the elections, have stayed silent as the TTP has avowedly targeted selected political parties with bloody violence and crippled their campaigns.

However, an interesting scenario is emerging. To try and call the election result would be foolhardy but it is clear that some of the serious contenders for power believe that the country’s defence, foreign and national security policies have been on the wrong track.

They are right to hold any opinion and seek a mandate for policy change. On the other hand, despite his own institution’s earlier ambivalence on issues such as the Taliban and the so-called war on terror, the army chief has of late taken to saying the war against the TTP is “our own war”.

The army chief’s statements are normally taken to represent the collective view of the institution. This may be one of those rare occasions when one finds oneself in agreement with the country’s top military man but that isn’t the point.

What if after the polls parties that have long maintained that the war against the TTP isn’t Pakistan’s war come up with a majority? For example, Imran Khan has repeatedly said he’d stick to his guns on the need to abandon ‘America’s war’ and initiate a dialogue with the Taliban.

Will such a stand put him and others who share his thinking such as the Jamaat-i-Islami on a collision course with the military? Well, if the mandate is clear-cut in favour of a policy change one is sure he has the determination to stay the course regardless of the consequences.