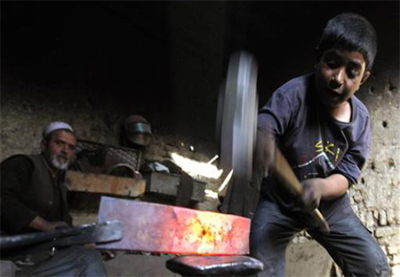 Pakistan is one of the largest countries with respect to its labour force. More than 40% of labour force belongs to agriculture, around 20% in industry and rest to other services. It is a shame that farmers, fishermen, ordinary workers, labour working in services and labour working for contractors are not covered under the labour laws.  Labour policy and labour laws are mostly ineffective to cover those which have this privilege.  September 2012 incident in Karachi where 260 people lost their lives is just an example of poor working conditions and security our labour force enjoys. No wonder that only 190 of the total workforce of almost 1500 workers were registered with EOBI ( source: http://www.piler.org.pk/Karachi%20Factory%20Fire.htm, viewed 01/05/2013). Labour condition in Pakistan is a horrible story of exploitation and ignorance.

2013 elections in Pakistan are going to be held on 11th of May, just ten days after Labour Day which is a public holiday in the country. In all the mayhem and noise surrounding the elections, will it be good to see what our prominent political parties have mentioned in their election manifestos in relation with labour policy? We have reviewed manifestos of major political parties such as ANP, JIP, MQM, PMLN, PPPP and PTI.

Three of these, ANP, MQM and PPPP had been part of the last coalition government. PPPP being major stake holder has mentioned some of its achievements in the government, mainly restoration of trade unions, new labour policy, promulgation of Industrial Relation Act 2012, increase in wages and extension in EOBI scheme to include more establishments in. They have pledged to create four labour representatives seats in national assembly and two each in each provincial assembly. They have shown commitment to articulate Trades Union Act and creation of a commission to follow ILO conventions in labour policies and laws. They have also shown interest in promotion of registration of workers including from agriculture, home based, domestic workers and other areas. They have pledged to strengthen workers welfare fund, EOBI to protect more workers. Another important step mentioned is protection of labour from FATA, PATA, Gilgit-Biltistan and AJK under labour laws.

ANP is keen to support trade unions and improve laws that restrict formation of trade unions. They have mentioned that they will revise and improve labour laws to ensure safe working environment. Wages will be reviewed and benefits will be set according to cost of living and inflation rates.

MQM has mentioned curbing forced labour, declaring peasants as labour to provide them protection under labour laws, establishment of joint monitoring boards of entrepreneurs and labourers.

JIP has mentioned reasonable share in corporate profits to the labourers, fair wages and salaries and wages indexed to inflation and revised annually. They are promising that trade unions will be allowed to improve employer-employees relations, worker training programs will be enhanced to increase skills (MQM has mentioned that as well), functioning of labour courts will be improved, contractual employment will be abolished in public and private sectors. Pensions will be increased and indexed to inflation.

PMLN is keen to address employment challenge; they are promising to create a national manpower plan to match demand and supply of manpower. They promise to set minimum wages to Rs 15,000 per month and that role of ‘collective bargaining agents’ will be made more effective in line with ILO conventions. Tripartite national and provincial productivity council and national health and safety council will be created to raise and develop productivity and coordination will be sought between government, employer and workers.

PTI is keen to maintain minimum wages with inflation levels; they say that laws related to employment of contract labour will be enforced. Tripartite board will be setup for each sector at provincial level for union registration, collective bargaining, occupational safety, health standards, gender inequality and other issues. They have shown strong reaction against bonded labour and that labour laws will be adjusted with advice from ILO. A strong policy will be adopted for fair use of workers welfare fund and workers profit participation fund.

What comes in mind after reviewing these manifestos in relation with labour force of Pakistan, labour laws and policy is that what has been pledged is not enough and mostly the statements are very vague; most of them are vague because hardly anyone has mentioned the challenges and ground realities. Without understanding where you are, it is very hard to understand where you want to reach, at least from perspective of practical achievable goals and benefits to the working classes.