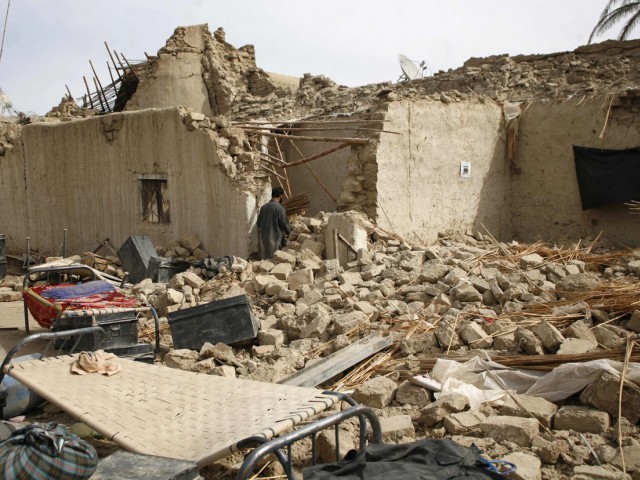 In Pakistan, most of the damage took place in Balochistan’s remote Mashkhel district.

Balochistan: Residents claim that relief operations in the quake-struck region of Mashkhel and its surrounding areas falls short of their needs, while government officials say they are doing all they can.

The 7.8-magnitude quake, which was centered in southeastern Iran on Tuesday, sent shockwaves that spread as far as Lahore and Karachi, though most of the damage took place in Balochistan’s remote Mashkhel district. The immense damage caused President Asif Ali Zardari to announce an amount of Rs 500,000 for the next of kin of those who lost their lives in the earthquake and Rs 100,000 for the wounded. Presidential spokesperson Senator Farhatullah Babar said that the president directed that every effort be made for rehabilitation of the victims.

A spokesperson of the Balochistan government said that situation was “under control” as the Provincial Disaster Management Authority had administered a fund of Rs 20 million for the provision of food, medicines and tents. Twelve trucks carrying nine hundred tents, thousands of packets of food, and other necessary items reached Mashkhel on Wednesday, along with several teams of doctors from Quetta, Kharan and Dalbandin who came equipped with medical supplies. He added that that the military and paramilitary forces were also lending a hand with relief activities.

When Inspector General Major Ubaidullah Khan visited earthquake hit Mashkhel on Thursday and witnessed the relief and rescue work in the area, he expressed his satisfaction over the aid works carried out by Pak Army, Frontier Corps and other institutions and directed the authorities to work in the same spirit until the complete restoration and rehabilitation of the affectees.

“The death toll is estimated at more than 40, including women and children,” Major Attiq Minhas of the paramilitary Frontier Corps Baluchistan told AFP at Dalbandin airport, around 250 kilometres from Mashkail. He said 650 personnel were involved in the rescue operation in Mashkail town and that so far medical staff had received 23 wounded people.

Abdul Bari, a 32-year-old tailor who broke his leg, told AFP that his wife and children were fine, but feared that dozens of people from his neighbourhood had been killed or wounded.

“I was on my way home from my tailoring shop when the earth started shaking and soon found myself on the ground with the wall of a house on me,” he told AFP in Dalbandin, after travelling for five and a half hours by taxi for help.
“When I felt the tremors, I saw within seconds houses razed to the ground. It was like doomsday,” he said, while waiting for an army helicopter ambulance.

“I saw three small children taken out from the debris of a collapsed wall by local people. Two were slightly injured while one seemed serious,” he added.

However, residents of Mashkhel say that the government’s relief activities are falling short. Some locals claimed that they never received any relief supplies, and that hundreds of people, some suffering from gastroenteritis, are unattended on the roadside and without shelter, food or medicine.

The military on Thursday continued to fly in medicine and tents, but more supplies are desperately needed, said local official Syed Mureed Shah.

“There’s growing impatience among the people affected by the quake as they are not receiving relief goods,” Shah said.

Rauf Jamal Dini, an official with Quetta-based charity Sahar, also called for more supplies, saying neither the military nor government authorities had been seen in areas visited by his aid workers.

“People are making complaints. They are in dire need of relief goods. We are conducting a rapid survey to assess the damage,” he said.

Relief activities are also impeded by the difficult terrain. “The distances are long, the roads are rocky, and hence supply-laden trucks take more time to reach people,” said Deputy Commissioner of Washuk Khan Mohammad Bangulzai while talking to The Express Tribune.

The Chief Minister Balochistan directed the relevant organizations to do their best for the provision of aid and rehabilitation to the affected people.

Meanwhile, the Governor Tabuk, a Province of Saudi Arabia, had rushed a plane load of relief goods and food packets. The plane landed at Dalbandin Airport on Thursday evening and the supplies will be distributed on Friday.