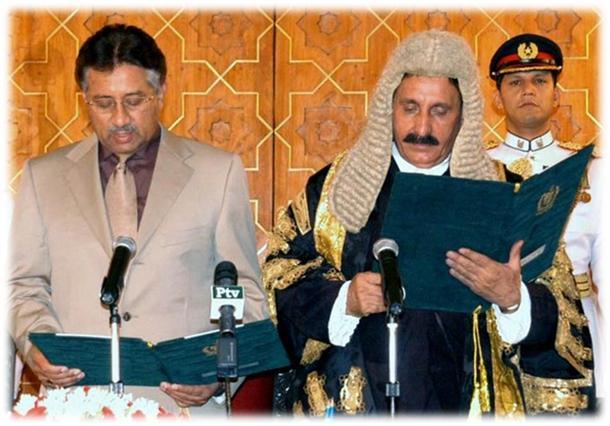 The Chaudhry Court trying Gen Musharraf under Article Six is like Justice Munir trying Gen Ayub or Justice Anwarul Haque trying Gen Zia for the same crime the six of them (8 including Gen Yahya and his CJ) committed together with their collaborators in the GHQ (corps commanders) and Judiciary (SC judges). The point is I have no love lost for any dictator in uniform or their be-wigged abettors. So why shouldn’t the President, the Senate and the Caretaker Government of Pakistan appoint a new non-PCO Supreme Court (ref Charter of Democracy) by the same executive-order route by which the incumbent judges were reinstated\restored in 2009, and let the justice take its due course? Why not indict all such generals and judges – living or dead? Why not declare them Traitors to the Nation; why not confiscate their properties; why not revoke all their titles, pensions and awards; why not officially rewrite the PLD and the armed forces annals accordingly; why not exhume the dead for re-burial in a new Graveyard of Shame; and why not let the living serve an irrevocable life sentence? I ask! If that’s not possible, stop this charade of judicial selectivity in the name of 62\63, “free, fair and transparent” elections and yet anything that distracts from May 11 despite the manoeuvred, conducive conditions for all but three political parties.

Additional “qualifications” of this usurper Chief Justice are:a) His son, Arsalan Iftiqar was caught with his hand in the till stealing money and receiving/collecting bribes and shake-down money on promises of getting a favorable outcome to cases that are /were being litigated in the Supreme Court where his father is a Chief Justice.b) This “Chief Justice” has turned the laws of the land and the Country’s constitution on its head. In his own mind he thinks that he is the supreme law giver— and not the Parliament –that frames laws or amends constitution, as he suffers from the illusion that he can make changes/ amendments to duly passed laws and articles of the Parliament. c) He did not allow his son’s case of corruption to proceed in the Supreme court and has tried to sweep the whole mess under the carpet.