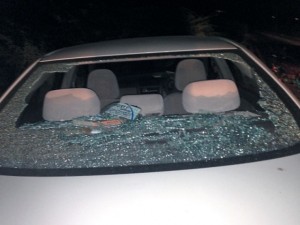 Saleem Khursheed Khokhar was reportedly attacked by two unidentified men on a red motorcycle who tried to stop his white Corolla No. GS-9063 near Thatta. PHOTO: PRESS RELEASE

KARACHI: The president of All Pakistan Minorities Alliance Sindh chapter, Saleem Khursheed Khokhar, survived an attack on him on his way to Karachi from Badin on Wednesday.

Two unidentified men on a red motorcycle tried to stop his white Corolla No. GS-9063 near Thatta, and opened fire when he didn’t stop. The police have registered an FIR No. 65/2013 at Thatta police station.

Khokar, who is a Christian and a former member of the Sindh Assembly, was very vocal in condemning the injustices done to religious minorities. He highlighted several cases of forced conversions and marriages on a number of occasions in the assembly.

Khokar, who has been attacked twice before in Essa Nagri, Karachi, feels that he is being targeted by religious extremists. “I am being threatened and have gone into hiding to protect myself,” he told The Express Tribune from an undisclosed location. “Law enforcement agencies know that I am being followed. My whole family is under threat but the government doesn’t care.”

Khokhar added that not one political leader or government official had contacted him since the attempted attack on him on Wednesday. “Where should I hide and to whom should I complain,” he asked. “Is it crime for the minorities to raise their voice?”

Khokhar used to be provided security but it was withdrawn after the government was dissolved. “It is the government’s duty to provide me security and find the people behind the incident.”

He denied the possibility that the culprits could have been mere robbers. “Police officials have told me that attacks like these don’t happen in the area through which I had been passing,” he said. “A mafia is after me and they want to kill me like they killed Shahbaz Bhatti.”

Bhatti, who was also a Christian, was elected the federal minister for minorities in 2008. He was killed allegedly by Tehrik-e-Taliban Pakistan in 2011 for his stance on the blasphemy law.