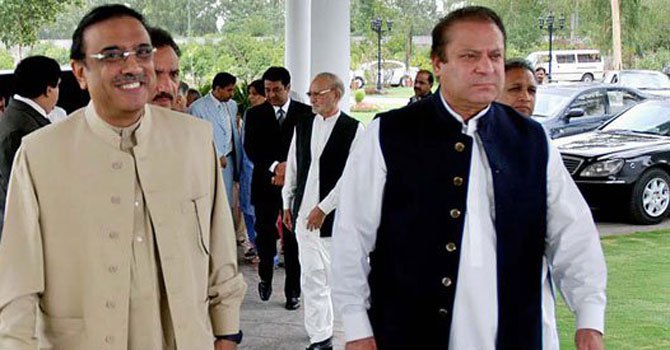 ISLAMABAD: The country’s two major political parties — the PPP and the PML-N — seem to have different views on the issue of setting up of a constitutional court in the country in line with the Charter of Democracy (CoD) that had earlier been agreed and signed by their leadership in London in 2006.

A careful study of the election manifestos of the two parties reveals that the PPP has clearly declared that it will establish a constitutional court in line with the CoD whereas the PML-N has kept the matter ambiguous by not mentioning it in the chapter dealing with judicial reforms.

Sources in the PML-N told Dawn that the party leadership had intentionally dropped this clause from the manifesto after discussing the issue in detail since it was no more on its priority list.

“Yes, it is true. We had agreed in the CoD to establish a separate constitutional court, but now our position has changed,” said a senior party member who was an active member of the committee that had drafted the PML-N’s manifesto.

On the other hand, unveiling their election manifesto at a news conference on March 14, the PPP leaders had specifically mentioned that after coming into power again, the party would set up a constitutional court as per the CoD signed by former prime ministers Nawaz Sharif and Benazir Bhutto while living in exile in 2006. The PPP while accusing the PML-N of backtracking on certain agreed matters claims that it has already implemented 80 per cent of the CoD during its five-year rule.

When contacted, PML-N’s deputy secretary general Ahsan Iqbal, however, said his party was still committed to implementation of the CoD. Quoting from the manifesto, he said: “The PML-N is deeply committed to the following principles of democratic governance as outlined in the CoD signed on May 14, 2006 in London between the leadership of the PPP and the PML-N.”

He believes that there is no need to mention each and every clause of the CoD in the manifesto. However, when asked if the PML-N was still committed to establishing a constitutional court, he said it was a complicated matter and required a legal and constitutional debate.

“Will there be two chief justices, if a separate constitutional court is set up besides the SC?” he asked, indicating clearly that the party now has second thoughts on the issue.

The PPP leaders say they did not pursue the matter during their five-year government as the party wanted to carry out legislation on all the issues with consensus.

“A strong judiciary is an independent and accountable institution. It should work within constitutional limits and in harmony with parliamentary mechanisms. In accordance with the Charter of Democracy, and to strengthen the federation, a constitutional court will be established with equal representation from all federating units and the inclusion of other areas administered by the state,” says the manifesto of the PPP which remained entangled with the judiciary throughout its five-year tenure.

The PPP in its manifesto has also expressed concern over “judicial activism”, saying: “Pakistan has witnessed two extreme trends in judicial tradition: one where the judiciary has colluded with anti-democratic forces and the other more recent trend of judicial activism which some have seen as an attempt to appropriate executive power.”

It further says: “While our party has fought for the independence of the judiciary, it is also cognizant of the principle of separation of powers as the basis of good democratic governance. Taking forward this vision, we pledge that we will undertake law reforms and frame new legislation, particularly for access to speedy and inexpensive justice.”

The PPP has pledged to “strengthen prosecution services through training and capacity-building for lawyers, formulate laws to expedite and increase access to justice by introducing mobile courts and evening courts, and by establishing formal mechanisms for alternate dispute resolution (ADR) through the local government system, revisit the review and writ jurisdictions of the courts to ensure that norms of justice are being upheld and to strengthen civil courts with a time limit on adjudication, and strengthen sessions courts.”

Whereas the PPP’s manifesto has outlined the steps in generalised form, the PML-N in its manifesto has a special chapter titled “Speedy and Inexpensive Justice” suggesting specific steps to improve the judicial system.

“Conscious of the mental and physical suffering of litigants whose cases linger over generations without final decision and firmly believing in the principle that ‘justice delayed is justice denied,’ the PML(N) has pledged to simplify procedures in order to accelerate disposal of cases.

“In particular, legislation will be enacted to provide that: (a) in civil cases, initial trial to be completed within one year, and appellate proceedings within the following year; and (b) in criminal cases, trial to be completed within six months and appeal be decided within one year. (b) Such legislation will include provisions for day-to-day hearings and award of heavy costs for unjustified delays and frivolous litigation,” says the manifesto.

The PML-N has also proposed appointment of judges from the lawyer community “on contract basis for a suitable period to help reduce backlog”. “In order to dramatically shorten time spent in litigation, the PML(N) government will request the Pakistan Law Commission to examine the feasibility of reducing the existing four-tier system (trial court, appellate court, high court, Supreme Court) to three-tier (trial court, appellate/high court, Supreme Court), as in the case of special laws, e.g. banking, labour, and environmental laws. Under this radical reform, civil courts would be abolished and trial would start at the additional district judge level. This will not only reduce litigation time by several years, but will also improve the quality of judgments at the trial level,” it says.