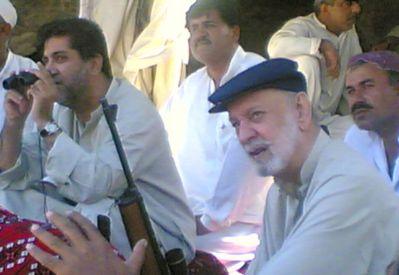 QUETTA:  Sardar Akhtar Mengal, the chief of his eponymous faction of the Balochistan National Party (BNP-M), has said that environment is not conducive for general elections in the volatile province.

“Fair, free and transparent elections are not possible in Balochistan where people are still receiving mutilated bodies of their loved-ones,” Mengal told journalists at Uthal, some 600km from Quetta, on Wednesday.

He claimed that enforced disappearances continued to multiply in the province where Baloch insurgents have been fighting a low-profile insurgency since 2004.

Mengal declared that if there was any option available for him and his political colleagues [to secure the rights of the people of Balochistan] “we will definitely use those options, and no power on earth can stop us”.

Recalling his recent meetings with the caretaker chief minister and the chief election commissioner, Mengal said the government has failed to address ‘serious reservations’ of his party. He added that he had conveyed to the chief minister that people were randomly picked up [allegedly by the spy agencies] and their mutilated bodies were dumped on roadsides.

“There are ‘no-go’ areas in Balochistan where armed gangs of killers hold sway under the protection of the establishment and paramilitary Frontier Corps,” he alleged.

“In such a situation free, fair and transparent elections are not possible,” he added. “Elections are being held in Balochistan at gunpoint which could not be free and fair.”

He said that nobody can carry the BNP flag in Khuzdar district due to fear of ‘state-sponsored death squads’. “These squads can lay siege to the offices of the election commission. There is no difference between holding general elections in Balochistan and [disputed Himalayan state of] Kashmir,” he said.

He claimed that hundreds of thousands of tribesmen were uprooted from their homes in the Bugti Tribal Territories and made internally displaced persons (IDPs) allegedly by the state. “More than 50 per cent people have migrated from Khuzdar alone who are now settled in safer areas of Sindh, including Karachi,” he added.