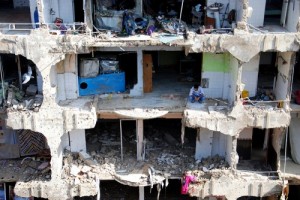 2013 has been an ominous year so far for Pakistan’s Shia Muslims, who are finding themselves the target of bombs and shootings aimed specifically at members of their community. Two bombs killed hundreds of Shias in Quetta, followed by another bombing in Karachi; all took place in areas where Shias live and work. In addition to this, many Shia doctors, professors, businessmen, and lawyers have been shot dead while they commute to work or are otherwise trying to conduct the business of their lives.

The perpetrators of this deliberate violence against Pakistan’s Shias (who constitute roughly 15% of the nation’s population) are the Sunni Deobandi militants who believe Shias are not just non-Muslims, but need to be completely destroyed or driven out of Pakistan. The motivation for this offensive campaign can be found in the generous funding these militant networks receive from outside sources, especially Saudi Arabia, who uses Pakistan’s militants as a way of exerting pressure on their rival Iran. Perhaps most tellingly, the name for what’s happening to Pakistan’s Shias has been termed “The Shia Genocide.”

Genocide is a difficult word to say. It sticks in the mouth, like a bite of something you can’t bear to swallow. The United Nations Office of the Special Adviser for the Prevention of Genocide defines it as: “any of the following acts committed with intent to destroy, in whole or in part, a national, ethnical, racial or religious group … ” including:

Given this definition, even the most cynical person would have to agree that what’s being done to the Shia in Pakistan qualifies as genocide.

Most of us who grew up at the end of the 20th century read about genocide in the context of World War II—at least that’s how I first learned what the word meant, watching crackling black and white footage of Jews imprisoned in concentration camps. Later, I studied history and realized that the Jewish population did not have the monopoly on genocide: Similar campaigns of extermination took place against the indigenous peoples of North and South America; the people of Armenia; and in Cambodia under the Khmer Rouge. Even later, I realized that the Pakistan army had enacted genocide on the people of East Pakistan when they decided to break away and form Bangladesh.

We watched in horror as genocide occurred in Bosnia and Rwanda in the last decade of the 20th century, yet all the cries of “never again” seemed to have fallen on deaf ears. It would seem that genocide is part of the human condition, as long as there are different ethnic groups competing for power and resources in any part of the world. In that sense, genocide will be impossible to eliminate, as long as identity politics continue to fuel conflicts between religious, ethnic, and racial groups. As the UN Commission states, “Given that no country is perfectly homogeneous, genocide is truly a global challenge.”

I remain unconvinced that Pakistan has the will to put a stop to the Shia genocide. For that to happen, the government would have to end discrimination, hate speech, and severely punish the incitement of violence against minority religious and ethnic groups in the country as the UN recommends; right now, while Pakistan transitions from one government to another, it’s simply too weak to do that. It’s also never going to stop the flow of funds from Saudi Arabia and other interested parties to militants. Until then, all we will have are words to describe the injustice that is being committed, once more, in front of our eyes.