For Zardari, five years of lost opportunities – by Ayesha Siddiqa 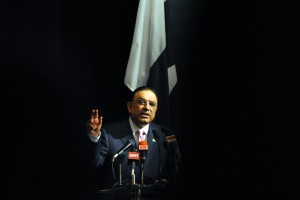 BUT DON’T you think we are getting over-excited about the PPP (Pakistan People’s Party) government and the Parliament completing its tenure?” It is almost as if every journalist who calls to seek comments on the state of democracy in Pakistan wants you to be sceptical. They would rather have people talk about all the unfulfilled dreams and promises of what was once Benazir Bhutto’s party. However, it is positive to see a transition from one civilian government to another taking place for the first time in the country’s history. The critics perhaps forget that the censure the ruling party has received is the real beauty of democratic rule. If you are unhappy with a party, you can seek to replace it with another. At least, the government is not being booted out. Yet, it would be too quick to call this the perfect run to the finish line because of two reasons.

First, the Parliament has completed its tenure but not the Cabinet. Prime minister Yousuf Raza Gilani was sacked through extra-political manipulation. This makes it similar to the fate of the 2002 Parliament that completed its term but saw three prime ministers. Such changes indicate pressures on the civilian government and the fact that it is still not free to operate. Moreover, the PPP government was unlucky due to the media being unleashed on it from very early on, giving it the reputation of the most corrupt party in the country. It is said about the PPP that it “drinks less than it spills”. It is far less adept in hiding its mismanagement than other parties in Pakistan, especially the urban-based Pakistan Muslim League (Nawaz Sharif ). The inability to think strategically in hiding its corruption does not bode well when the media is trained to target one particular party or group.

Recently, in response to whether I could write an opinion piece that may be slightly critical of the ethnic party, the Muttahida Quami Movement (MQM), the editor of an English daily told me that it was their policy not to criticise the MQM, the real estate tycoon Malik Riaz and the PML-N. This basically leaves out the Pakistan Army and the PPP. While the armed forces are not really affected by criticism, the PPP definitely is.

Second, the end of the government has left people feeling that the PPP lost out also because of its inherent inefficiency and lack of personalities who have Benazir’s natural capacity to lead the party. Asif Ali Zardari may be a past master at brokering deals and saving a moment, but he may be unable to save the party from collapse or becoming an entity of the past rather than the future.

Indubitably, things were not on the side of Benazir’s party, which is suspected much more than any other political party by the army. Things were not easy in the past five years because Zardari had changed the top leadership and brought in people of his own choice, a development that created more sceptics and enemies. In the past five years, Zardari certainly earned the reputation of being a great survivor. He resisted and circumvented all pressures that might have materialised in greater military intervention. However, this survival was done at the cost of inaction in many areas, starting from the inability to manage the party and market it properly. His media team proved fairly ineffective in selling policies for which the government could take credit, such as the passing of the 18th amendment to the 1973 Constitution, allowing for greater provincial autonomy.

Some people believe that he ran the party like a mafia where close family members like his sister Faryal Talpur and others manipulate important decisions. But then the PML-N could be accused of a similar practice. Nawaz’s younger brother and Punjab Chief Minister Shahbaz Sharif is accused of having a whimsical management style and concentrating resources within a 200-mile radius in central and north Punjab. But the party has managed to have a better image because a large number of critical players, including the judiciary, support the PML-N more than the PPP.

To reiterate an earlier point, it is not just about bias but also about the manner in which Zardari managed the affairs of his PPP, which currently has no capacity to meet the challenges of the future. Bilawal Bhutto-Zardari or any of the Bhutto children continue to have the support of the followers, but little capacity to excite the young voters who will increasingly become the new stakeholders in politics. To quote renowned journalist Mohammad Zia-ud-Din on Zardari, “Why do you expect so much from him, because he is like this!” which can be read as “a mediocre politician when it comes to making good policies”.

Quite a few people in Islamabad thought until recently that the army might want to hang on to Zardari mainly because he has done nothing to disturb the GHQ. Although interested in granting India the Most Favoured Nation status, he did not actually do so mainly due to his preoccupation with the politics of survival. But that does not in itself make him any different from other politicians in Pakistan or India who would not risk their popularity even for a good idea.

THERE ARE many who thought that Zardari lost an opportunity to curtail the Pakistan Army’s power soon after the US military operation to snuff out Osama bin Laden in Abbotabad in 2011. However, such expectation is misplaced because placing restrictions on the army or taking it to task was not possible for a party that had already begun to feel and act haggard. Moreover, the military was quick in claiming its space on several occasions when the PPP under Zardari did try to challenge the power of the armed forces. Efforts like changing the command and control of the ISI or making partnerships abroad, especially with the US, to put pressure on the army have not really worked. The GHQ, on the other hand, was more forceful in pressuring Zardari through acts like the Memogate scandal, which was meant to get rid of the president and punish the PPP for trying to reduce the army’s nuisance value.

Zia-ud-Din’s earlier claim, however, begins to make greater sense when we look at the ruling party’s mismanagement of state affairs and not giving proper attention to development, particularly infrastructure development in the energy sector. The situation in the country with electricity and CNG load-shedding alone is something that has made the PPP enormously unpopular. Punjab province, which matters in the 2013 election, is where the PPP became most unpopular.

There is no ideal way of examining the PPP’s performance in the past five years because while it was unable to deliver good governance, it faced greater political challenges from all fronts, rather than any other party. Its poor performance in defending itself and fighting back more vigorously is also due to its inherent nature of being good at agitation politics. That’s the only thing the PPP knows how to do well. It has never performed well in governance. But more importantly, it does not have the wherewithal in terms of vision or political leadership to plan better for the future.

Thus, it is sad to see that the one thing on which there could almost be a consensus among the people is Zardari’s perceived corruption and exhaustion from the PPP. The future certainly does not belong to what was formerly Benazir’s party. The real moot point, however, is whether the next government will behave differently or fare better.

3 responses to “For Zardari, five years of lost opportunities – by Ayesha Siddiqa”