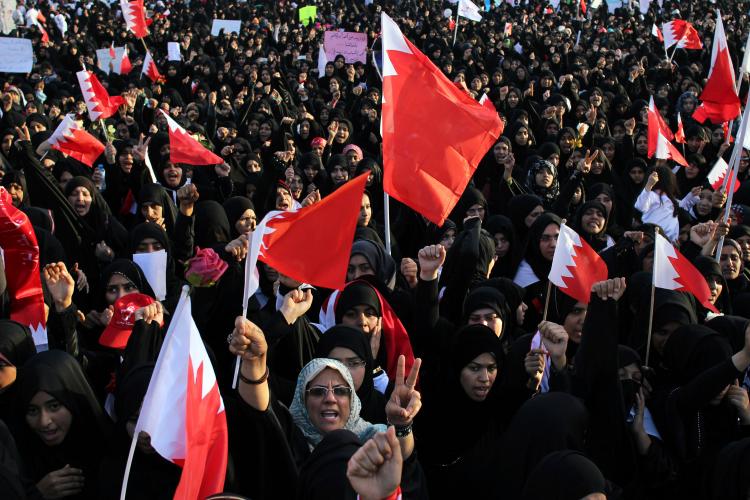 A great leader is immortal — their words and deeds echo through the years, decades, and centuries. They echo across oceans and borders and become an inspiration that touches the lives of many who are willing to learn. One such leader is the remarkable Martin Luther King Jr. As I read his words I feel that he is reading out to us from another land and another time to teach some very important lessons. Amongst those lessons: not to become bitter, to be willing to sacrifice for freedom and to never sink to the level of our oppressors.

As flowers of hope and resistance to oppression started spurting out of the ground across the Arab world, the people of Bahrain saw the first signs of a new dawn. A dawn that would end a long night of dictatorship and oppression, a long winter of silence and fear, to spread the light and warmth of a new age, an age of freedom and democracy.

With that hope and with determination the people of Bahrain took to the streets on the 14th of February 2011 to peacefully demand their rights. Their songs, poetry, paintings and chants for freedom were met with bullets, tanks, toxic tear gas and birdshot guns. The brutal Alkhalifa regime intended to end the creative peaceful revolution, by using violence and spreading fear.

In the face of this brutality Bahrainis showed great restraint, day after day protesters held up flowers to soldiers and mercenaries who would shoot at them. Protesters stood with bare chests and arms raised shouting “peaceful, peaceful” before they fell onto the ground covered in their blood. Thousands of Bahrainis were detained and tortured for crimes such as “illegal gathering” and “inciting hatred against the regime.”

When I look into the eyes of Bahraini protesters today, too many times I see that hope has been replaced by bitterness. The same bitterness Martin Luther King Jr. saw in the eyes of rioters in the slums of Chicago in 1966. He saw that the same people who had been leading non-violent protests, willing to be beaten without striking back, were now convinced violence is the only language the world understood.

I, like King, find myself saddened to find some of the same protesters who faced tanks and guns with bare chests and flowers, today asking “What’s the use of non-violence? Of moral superiority? If no one is listening?”

Martin Luther King Jr. explains that this despair is only natural when people who sacrifice so much see no change in sight and feel their suffering has been worthless.

Part of the reason change towards democracy is so slow in Bahrain is ironically the support democratic nations give to the dictators here. Whether it’s by selling them arms, or giving economic and political support, the United States of America and other western governments have proven to the people of Bahrain that they stand with the AlKhalifa monarchy against the democratic movement.

As I read through Martin Luther King’s words I found myself wishing he was alive. I found myself wondering what he would have to say about the U.S. administration’s support of Bahraini dictators. What he would say about turning a blind eye to the blood and tears being spilt in the quest of freedom. All I had to do was turn a page, and this time Martin Luther King spoke not to me, but to you; to America:

John F. Kennedy said “those who make peaceful revolution impossible will make violent revolution inevitable.” Increasingly, by choice or by accident, this is the role our nation has taken: the role of those who make peaceful revolution impossible by refusing to give up the privileges and the pleasures that come from the immense profits of overseas investment. I am convinced that if we are to get on the right side of the world revolution, we as a nation must undergo a radical revolution of values. A true revolution of values will soon cause us to question the fairness and justice of many of our past and present policies.
These are revolutionary times … all over the globe men are revolting against old systems of exploitation and new systems of justice and equality, are being born. … We in the west must support these revolutions.

It is a sad fact that because of comfort, complacency, … and our proneness to adjust to injustice, the western nations that irritated so much of the revolutionary spirit of the modern world have now become the arch anti-revolutionaries. We must move past indecision to action. We must find new ways to speak for peace … and justice throughout the world, a world that borders on our doors. If we do not act, we shall surely be dragged down the long, dark and shameful corridors of time reserved for those who possess power without compassion, might without morality, and strength without sight.

The echo of Martin Luther King’s words has travelled across oceans, through the walls and metal bars of a Bahraini prison, and into the overcrowded and filthy cell I sit in. I hear the words of this great American leader. A presidency isn’t what made this African American great, but his unbending dedication to morality and justice.

As I marvel at his wisdom and I wonder if America is also listening.

Being a political prisoner in Bahrain, I try to find a way to fight from within the fortress of the enemy as Mandela says.

Not long after I was placed in a cell with 14 people — two of which are convicted murderers — I was handed the orange prison clothes. I knew I couldn’t put them on without having to swallow a little of my dignity. Not wearing the convicts’ clothes — because I have committed no crime — was going to be my small version of civil disobedience. Not letting me see my family and my three-year-old daughter, that has been their punishment. That is why I am on hunger strike.

Prison administrators ask why I am on strike and I reply “because I want to see my baby,” and they reply “obey and you will see her.” But if I obey, my little Jude won’t be seeing her mother, but a broken version of her. I wrote to the prison administration that I will not be wearing the convicts’ clothes because “no moral man can patiently adjust to injustice.” (Thoreau)

What makes jail difficult is that you are living with your enemy. Even in the most basic ways, if you want to eat you stand in front of him with your plastic tray. Every day one faces the possibility of being ridiculed, shouted at, or humiliated for any reason.

But I have let the words of great men help me through these times.

When the “specialist” threatened to beat me for telling an inmate she has a right to call her lawyer, I did not shout back, I repeated King’s words in my head “no matter how emotional your opponents are, you must be calm.”

When I had had enough of people telling me that I’m getting all my rights and refusing to face that I have responsibilities, after hearing that sentence enough times, I got angry. And what’s worse, I felt so frustrated that I shouted back.

But then hadn’t a great man said, in the struggle of justice we “must not become bitter,” and “never to sink to the lever of our oppressors.”

A doctor came to see me and said “you might go into a coma; your vital organs might stop working; your blood sugar levels are so low; and all this for what… a uniform.”

I replied: “I’m glad you weren’t with Rosa Parks on that bus, to tell the woman who sparked the civil rights movement ‘that it was all for nothing but a chair.'” When the doctor started asking about the African American movement I offered my Martin Luther King book — if you know me you would know that I very rarely offer to give away my books.

Sometimes, through his words, Martin Luther King has been a companion, a cell mate more than a teacher.

He says, “No one can understand my conflict who hasn’t looked into the eyes of those he loves, knowing that he has no alternative but to take a stand that leaves them tormented.” I do understand. He wrote as though he sits beside me. “The jail experience … is a life without the singing of a bird, without the sight of the sun, moon, and stars, without the felt presence of fresh air. In short, it is life without the beauties of life, it is bare existence — cold, cruel, degenerating”.

My father, my hero and my friend, sentenced to life in prison for his human rights work has also refused to wear the grey prison uniform. As usual the government tries to “put us in our places” by taking away what means most to us. They will not allow my father his family visit. And to taunt him they also, for the first time, said he would be able to visit me in prison if he wore the uniform.

Cruelty is the AlKhalifa regime’s trademark, but unwavering courage and patience are my dad’s. No emotional pressure will break him.

The family visit is the one thing one looks forward to in prison. My father and I will not be seeing our family or each other, but the struggle for our rights will continue.

Until we see our family next, we hold them in our hearts.

Yesterday I sent while looking at my prison cell door with its iron bars, and I had a dream. But this time it was a small and simple dream, not of democracy and freedom. I just saw my smiling mother, holding my daughter’s hand, standing at the door of my prison cell. I saw them walk through the metal, my mother sat on my prison bed, my daughter and I lay side by side, our heads in her lap. I tickle Jude and she laughs, my heart fills with joy. Suddenly I feel we’re in a cool and protective shadow, I look up and see my father standing by the bed, looking at the three of us and smiling. I dream of those I love, it is their love that gives me the strength to fight for the dreams of our country.