Lahore, March 25:  The Human Rights Commission of Pakistan (HRCP) expresses deep concern at the prevailing situation in the Tirah valley, Khyber agency. The Commission strongly condemns the bomb attack killing at least 17 people at Jalozai, this past Friday on a camp for those internally displaced by the violence in Tirah valley.

The Commission extends sympathy and sincere condolences to all those who have suffered due to the blast.  It is regrettable that the Government has been unable to establish its writ in the valley, where the violence perpetrated by extremists has been continuing for several months. It seems that after the recent escalation of violence control over a sizeable territory has been lost to the Deobandi Takfiri militants of Sipah Sahaba Taliban (ASWJ/LEJ) . The  Commission implores the Government to take the necessary and proper measures required to immediately re-establish control in the Valley. Further, the Government should make all adequate provisions to ensure the well-being and speedy rehabilitation of all those who have become Internally Displaced Persons (IDP) due to this conflict. 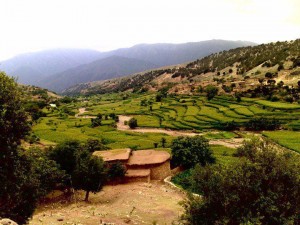 A view of Tirah valley

The valley of Tirah is not a distant country in some other continent. It is located in the Federally Administered Tribal Areas (FATA), in the northwest of Pakistan. And very recently, Tirah has fallen to the Taliban after a fierce couple of months of fighting. The main battle for control of Tirah was between the Ansarul Islam (AI) and the Lashkar-e-Islam (LI) backed by Tehreek-i-Taliban Pakistan (TTP). The news of this fighting has been covered extensively by some of the leading daily newspapers of Pakistan in some detail, but unfortunately the mainstream news channels of Pakistan have completely ignored it.

For the first time in the history of Pakistan, a civilian government has managed to complete its tenure of five years in power and now the process for the transition of power from one civilian government to the next is under-way. This is historic indeed and the entire country is gripped with election fever as the polls come closer, announced for the 11th of May. At the same time though, an entire population has been displaced from Tirah as the fighting continues there and thousands of families are desperately seeking shelter at refugee camps set-up for them by the Political administration of FATA in the Orakzai and Kurram agencies. Help is being sought from the UNHCR by the FATA Disaster Management Authority (FDMA) and as recent reports suggest, the UNHCR has halted its efforts due to security concerns after an attack on the Jalozai Camp (Afghan Refugee Camp) in Nowshehra. Governor Khyber Pukhtunkhwa, FATA secretariat, Ministry of States and Frontier Regions (SAFRON) and the President of Pakistan are directly responsible by law and as per the constitution of Pakistan for FATA, which includes Tirah, but none of these authorities seem to be concerned with whatever has been happening there and haven’t really said anything or done anything substantial and concrete to help facilitate the displaced thousands at the very least.
https://lubpak.com/archives/253881