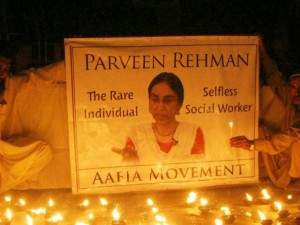 Rehman was gunned down by armed men in Pakthunabad neighbourhood of Karachi on March 13. PHOTO:NNI

Ballistics have matched the weapon used to kill Orangi Pilot Project director Perween Rahman to that said to be found on a suspected Tehreek-i-Taliban commander’s aide in Manghopir.

The Sindh forensics division issued its report on Monday, five days after Rahman was shot dead in Pirabad by two men on a motorcycle at close range.

The day after she was murdered, the police killed a Taliban commander’s aide in a shoot-out. They later said that he was identified as Qari Bilal Deobandi, about 25 years old, based on information given by their network of informers. The informers told the police Bilal was involved in Rahman’s murder.  The TTP (Taliban, also operating as Sipah Sahaba ASWJ-LeJ) has said it was not involved.

The bullet shells of a 9mm pistol used in Rahman’s attack and a 9mm pistol found on Bilal were sent to the forensics division for a match. The expert who did the match confirmed this and that the record of Bilal’s pistol was also being crosschecked with data of around 9,000 records. He said he could not be named as he did not have authorisation to speak to the media. However, forensics AIG Iqbal Dara confirmed this development. The forensics division declined to show this reporter the match.

DSP Zahid Hussain, a member of the investigating team, also confirmed the ballistics match but added that the police had other leads, which could not be shared with the media.

Meanwhile, Qari Bilal’s body has been handed over to his family here in Karachi. They have taken it to his hometown in South Waziristan for burial. Bilal’s paternal cousin Zakirullah, a motor mechanic in Sohrab Goth, told The Express Tribune that as far as they knew, he had no links with the TTP and was a seminary student in Waziristan who had come to Karachi for his vacations a month or so ago.