Balochistan Police on Wednesday claimed to have arrested eleven children aged between 11 to 16 years, who were allegedly involved in carrying out the  Bacha Khan “Chowk” blast in Quetta, Express News reported.

The blast at Bacha Khan square in January had killed 12 people and injured many others. Sixteen year-old Sabir, among those detained, was particularly used in that blast.

Mehmood said that the children had admitted to receiving Rs3,000 for each of the attacks they carried out. The CCPO said that terrorist organizations exploited the poverty of these children.(see complete news report here)

The news report was updated on Facebook with the following image. 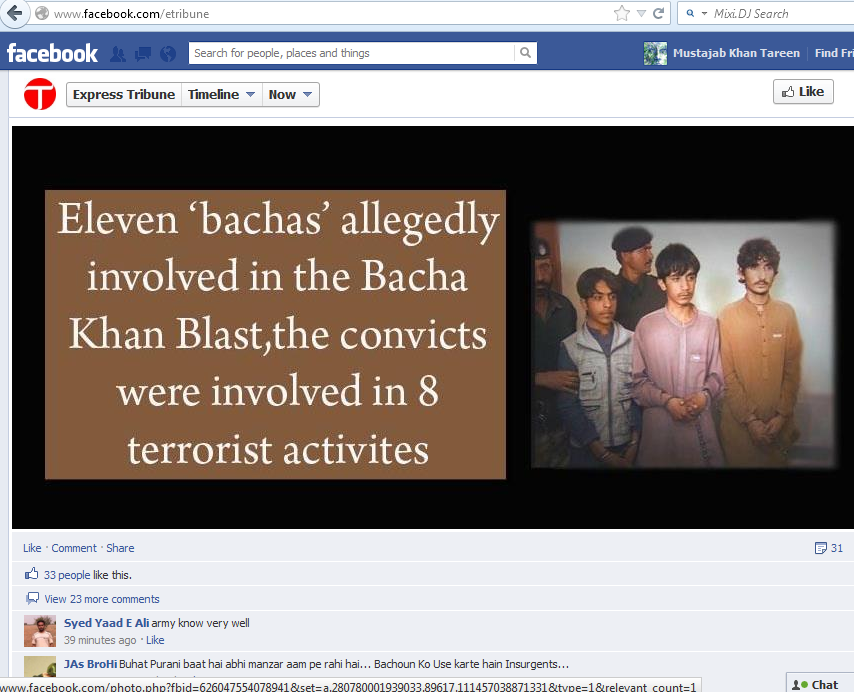 The image above shows the children with following cheesy headline,

“Eleven “Bachas” allegedly involved in the “Bacha Khan Blast” , the convicts were involved in 8 terrorist activities”

Its a tricky headline, here the editor has replaced word “Children” with an Urdu word “Bachas” just because the word goes well with the name of the place “Bacha Khan Chowk”. Also he has omitted word “Chowk or Square” and in a weird way wrote “Bacha Khan Blast”.

While trying to be funny, he ended up being shamelessly associating the child bombers to Khan Abdul Ghaffar Khan popularly known as Bacha Khan among the Pashtuns and Frontier Gandhi across the world.

In English, both the words sound similar while both are different in pronunciation. The first one is written in Urdu as ” بچّہ “ while the other is      “با چا”. “Bachas” in Urdu means “Children” while “Bacha” in Pashto means “Badshah or King”. The editor ignored that these similar sounding words are from two different languages, but the way he is using it will hurt those who have great regard for Bacha Khan.

But, hardly anyone will notice or object over the idiotic headline, as the majority of Pakistanis hardly understands Pashto or take care of Pashtun sensibilities. Only words they know from the rich Pashto language are the popular word, “Kho che” “Kharkar” and “Taliban”. Though most of them can   tirelessly talk for hours on Pashtuns living in Khyber Pakhtunkhwa, FATA and Afghanistan.