We condemn attack on Sunni Barelvi mosque in Peshawar by Takfiri Deobandi militants of ASWJ-LeJ and Taliban.

A bomb exploded in a Sunni Barelvi mosque in Peshawar, killing at least 6 people and wounding more than 25 others.

Pakistani media has shamelessly hidden the fact that Sunni Barelvi Muslims were killed in Peshawar mosque by Deobandi militants of ASWJ.

The Peshawar bombing occurred in Meena Bazaar, a shopping area, as worshippers were finishing afternoon prayers. Among the dead was the chief cleric of the mosque, which belongs to the Barelvi sect of Islam, practiced by most Pakistani Sunni Muslims.

Senior police officer Imtiaz Khan says the bomb was planted in a bookshelf inside the mosque. Khan says the remote-controlled bomb was detonated when noon prayers started in the mosque. Peshawar, the capital of Khyber Pakhtoonkhwa province, has been the site of several terrorist attacks by Deobandi militants (ASWJ, Taliban) in recent months. In recent months, a number of Shia Muslims, anti-Taliban secular politicians and moderate Sunni Muslims have been target killed in Peshawar and other parts of Pakistan. 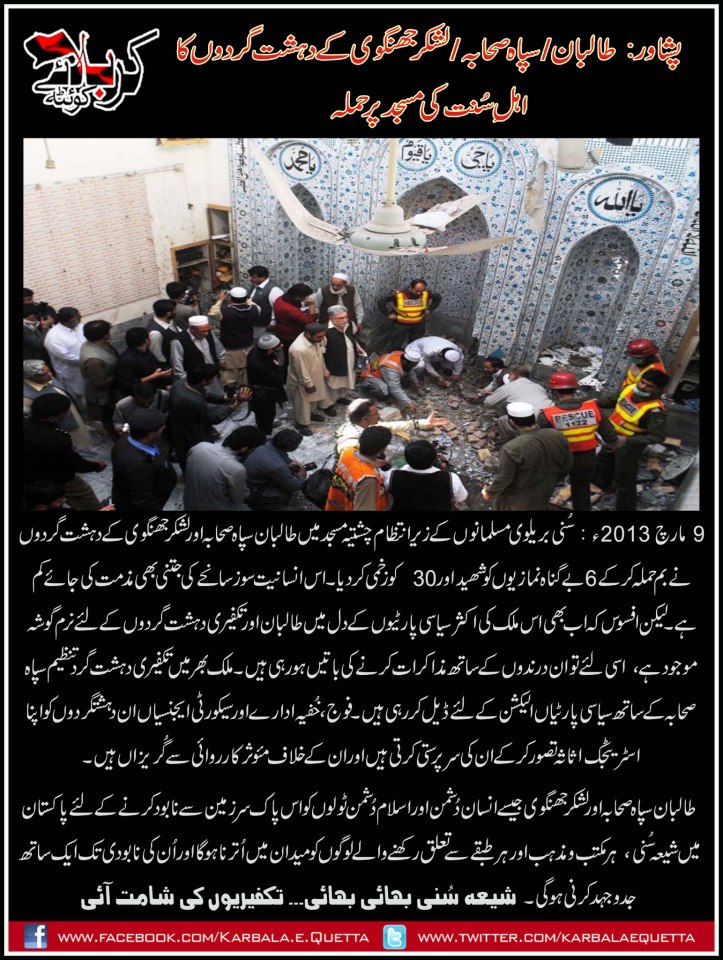