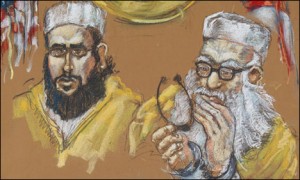 MIAMI: An elderly Muslim cleric in the US was convicted on Monday of funneling thousands of dollars to support the Pakistani Taliban terror organisation.

Hafiz Khan, the 77-year-old imam at a Miami mosque, was found guilty of two conspiracy counts and two counts of providing material support to terrorists.

Prosecutors built their case largely around hundreds of FBI recordings of conversations in which Khan expressed support for Taliban attacks and discussed sending about USD 50,000 to Pakistan.

There were also recordings in which Khan appeared to back the overthrow of Pakistan’s government in favour of strict Islamic law, praised the killing of American military personnel and praised the failed 2010 attempt to detonate a bomb in New York’s Times Square.

Khan insisted the money he sent overseas was for family, charity and business reasons — above all, his religious school, known as a madrassa, in Pakistan’s Swat Valley. Khan also said he repeatedly lied about harboring extremist views to obtain USD 1 million from a man who turned out to be an FBI informant wearing a wire to record their talk.

“That is not supporting terrorism,” said Khan attorney Khurrum Wahid in a closing argument. “That is an old guy running a scam, who got scammed.”

Prosecutors, however, said the purported USD 1 million offers is never heard on any tapes, and no other witnesses testified about its existence. The informant, identified in court papers as Mahmood Siddiqui, did not testify.

“That is an absurd story,” Assistant US Attorney John Shipley said. “This whole defense is a lie.”

Two of Khan’s sons, Izhar and Irfan, were cleared of all charges, and three more defendants have remained free in Pakistan, which does not extradite its citizens to face US criminal charges.

One of those in Pakistan, Ali Rehman, testified via video link that he was not a Taliban fighter, as US prosecutors claim. He said he handled more than USD 30,000 in financial transactions for Khan, mainly to invest in a potato chip factory run by Khan’s son-in-law.

After Rehman’s testimony, Pakistani authorities shut down the video link from an Islamabad hotel to the Miami courtroom, leaving Khan without the testimony of 10 witnesses on his behalf.