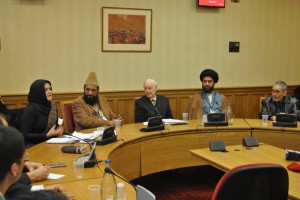 Electoral alliances with militant outfits responsible for Shia genocide will create more mayhem, warned the speakers at the conference to condemn recent wave of Shia killings in Pakistan.

The Conference was organized by the parlimentary human rights group. Lord Avebury in his address at house of lords called the attacks on shias as genocide as defined in article 2 of the genocide convention.

He also criticised the role of some political parties in Pakistan who were striking an electoral pact with the militant outfits to contest the forthcoming general election. He warned that such electoral alliances will almost certainly have MPs in the next Parliament belonging to those parties who spread hatred and finance to meet their goals. Lord Avebury expressed concern that extremist mindset has infected the mainstream Barelvi sect and the hate mongers are destroying the national fabric of the country.

The Chairperson of International Association of Human Rights and former co-ordinator of human rights (Europe), Barrister Rubab Mehdi Rizvi expressed alarm at escalation in violence against Shias in the recent months including bomb blasts in market places and buses carrying people being stopped and passengers gunned down after identification. She saluted the fortitude and dignity of young Shias and appreciated the peaceful nature of the protest. She demanded stringent legislation to prohibit hate speech and levelling charges of apostasy.

Mrs Rizvi also expressed disappointment that the charges on Malik Ishaq are still unknown although at least two FIRs have been registered against him. She noted that Malik Ishaq has been released before for lack of proof and for this reason she demanded closing the loopholes in the law of evidence to ensure that terrorists are not able to use these loopholes to secure their release.Allama Nasir

Baig- Spokesman Central Association of Sunni Muslims UK & Europe said, ” I am shamed of what is being done in Pakistan in the name of Ahle sunnat wal JUmmat. I would like to categorically put this on record that these terrorists have got nothing to do with Ahle Sunnat wal Jammat. There is no shia sunni divide at a common man’s level in Pakistan or there would be civil war.Shias have been an asset for Pakistan. Many Pakistanis still don’t realize that the man they worship for creating their nation, Mohammad Ali Jinnah, was a Shia himself. Jinnah envisaged a Pakistan in which all citizens irrespective of religious identity, colour, caste, gender and social status would enjoy equal rights.The same people who called Quaid e Azam Kafir e Azam are now trying to break Pakistan.

Syed Ali Reza Rizvi, Chair Majlis e Ullema Council- refering to Lord Avebury’s speech said” just as the Lord has acknowledged the is shia genocide in Pakistan. We would urge all Pakistani community and British Government to ask Pakistani Government to acknowledge to acknowledge that the atrocities against Shia Muslims are tantamount to genocide. If Hazaras were salafis they would not be targeted. They are killed only because they are shia.

Dr Shuja Shafi, Deputy Secretary General of the Muslim Council of Britain-the acts of violence against shias are totally unacceptable and unjustified. They embody erosion of Islamic values and dignity of human values MCB has put a strong emphasis on intra faith unity and we have a number of shia office bearers.

Dawood Mashadi Director, Trustee Minhaj Al Quran, we need to take further steps whether it is to institutional bodies of Pakistan. Terrorists released should not be able to say a word outside prison. Any Organization should be aware that if they engage in hate speech they will be made an example. Today it Hazaras tomorrow it can be anyone. Pakistan needs to take constructive and solid steps to confront terrorism.

Mustafa Qadri, Amnesty International-It seema although killings have been going on for years with every attack they are going more and more brutal.Although there are many problems in Pakistan the state has capacity and should bring kilers to justice.One key issue is the politicization of institutions both military and civil.The security forces aren’t geared to protecting society.

Allama Musharaf Hussain demanded that the Ministry of Interior keep a close eye on the 11000 madrasas declared sensitive. He said the deobandi sect is only 15 perent of the population yet they have 70 percent share in the madrasas.

Yousil Al Khoei of the Al Khoei Benevolent Foundation in his closing remarks said some hope needs to be put in the hearts of peace loving people so they do not talk about picking arms. To convert, flee or be killed shouldn’t be an option for any community.