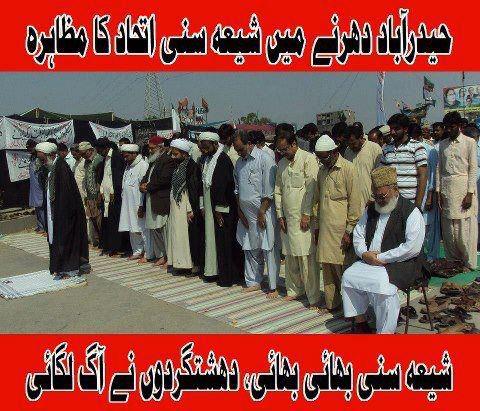 Those Takfiri Deobandi militants of Sipah-e-Sahaba (ASWJ-LeJ) who attempt to cause sectarian discord among Sunnis and Shias were effectively defeated when Sunni and Shia Muslims expressed unity in condemning Shia genocide.

Shias and Sunnis should remain united against Saudi-sponsored Takfiri enemies of Pakistan, Islam and humanity.

Two days after a Sunni militant group killed 84 Hazara Shias in Quetta, Pakistan, a group gathered for a candlelight vigil in Islamabad.

The crowd that gathered in Islamabad outside an Imambargah, a Shia congregation hall, was one of many gatherings that took place Monday evening throughout the country, mostly in the larger cities. In Islamabad, they stood in a small huddle lit by the candles they held.

“This is discrimination, and it is the beginning of a genocide against Shias,” one of the attendees, Quratulain Ali, told the crowd. Shia Muslims make up 20% of the population in Sunni-majority Pakistan. The mostly-Shia Hazara community has been targeted in the latest attacks because their Central Asian traits make them easily identifiable. 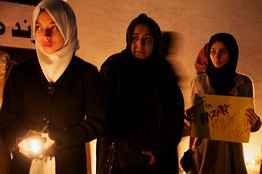 Annabel Symington/The Wall Street Journal
A young woman held a sign reading I am Hazara, kill me at a vigil in Islamabad, Feb. 18.

Ms. Ali, a Shia herself, had spent four days and nights on the streets of Islamabad in solidarity with the Hazaras killed in a separate attack in January.  Ms. Ali said she would continue to return to the streets until the government addressed the rapidly declining security situation for Shias in Pakistan.

Some Sunnis also participated in the gathering. Samina Afzal, 25, said she attended the vigil to express solidarity with the Shia community. She said that the root of the problem lay in Pakistan’s imbalanced society. “Society is split between the powerful and the weak, the rich and the poor,” Ms. Afzal said, “If the government addressed the imbalances, terrorism would not have a place in Pakistan.”

Many of those gathered there pointed fingers at the government for failing to quell the spread of militant groups throughout the country. “I know who is doing this, the government knows who is doing this,” said Khwaja Mustafa, chairman of the Markazi Asna Ashri Trust Islamabad, a Shia community group, “These are confirmed terrorists living out in the open.”

The Pakistan Peoples Party-led government has come under criticism from not taking a strong stance against the spread of sectarian violence in the country. Many known militant groups operate openly in the country despite being officially banned as terrorist organizations.

After the January killings, Islamabad replaced the local government in Quetta’s province of Baluchistan, but many say that is not enough.

The government is currently tasked with addressing a complex web of problems: a worsening security situation, a crippling energy crisis, endemic corruption and a stagnant economy, which have come to a head in what is a key election year.

Some, like Asifa Murdaza, who participated in Monday’s vigil, argued that human rights have been sidelined, and it was time for authorities to intervene. “There needs to be change and I don’t care who does it,” she said. 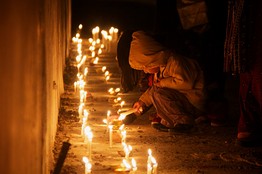 Pakistani intelligence officials say extremist groups, led by Lashkar-e-Jhangvi, the group that claimed Saturday’s attack, have escalated attacks on Shias to trigger violence that would pave the way for a Sunni theocracy in U.S.-allied Pakistan.

The split between Sunnis and Shias developed after the Prophet Muhammad died in 632 AD when his followers could not agree on a successor. Emotions over the issue remain highly potent, and pushed Iraq five years ago to the brink of civil war.

In Islamabad Monday night, solidarity and peace was the main message, however.

“This is not a matter of Sunni and Shia. This is just terrorism,” said Abbas Maqavi, holding a candle at the vigil.

ISLAMABAD: Hundreds of Shias, including women and children, took part in a sit-in protest against Quetta bombings targeting the Hazara community.

Rawalpindi echoed with various slogans, such as “Stop Shia genocide”.

The protests started early morning and continued till the evening when a six-member parliamentary delegation of the government reached an agreement with the protesters on Tuesday.

According to reports, private and public vehicles were also pelted with stones on the Faizabad Interchange.
Reportedly, students and activists of the Majlis-e-Wahdatul Muslimeen (MWM) started the protests at Bhara Kahu, Faizabad and Mareer Chowk against Shia carnage in the country.

As a result, Murree Road at Bhara Kahu, the Islamabad Highway at Rawat, Expressway and IJ Principal Road at the Faizabad Interchange remained completely blocked for vehicular traffic.

Reportedly, protesters blocked the Faizabad Interchange for more than 10 hours.
According to report, the flow of traffic was disturbed because the protesters burnt tyres, parked loaded trucks and put cement blocks on various roads.

The protesters also raised their voices against intelligence agencies, security forces, military and political parties and alleged that none of the authorities concerned were interested in solving the matter.

According to details, the MWM staged sit-ins at various areas of the capital, including Faizabad Interchange, Kashmir Highway, D-Chowk and Liaqat Bagh, to protest against the death of more than 84 people who were massacred in a bomb blast in Quetta on Saturday.

MWM Islamabad chapter President Zaheer Hussain said that the sit-ins were organised to express solidarity with families of the deceased victims. He also said that Quetta should be handed over to the army. He added, “The government should take an immediate action against the banned militant group, Lashkar-e-Jhangvi, which in recent months has played havoc with Shias, especially the peaceful Hazara community of Balochistan, through a string of attacks.”