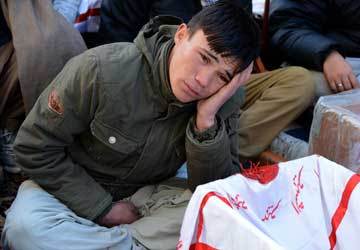 The Quetta Shia (Hazara Town) carnage has killed at least 110 people and wounded more than 200. A few weeks earlier in the same city a snooker club at Alamdar Road was attacked killing at least 90 non-Hazara Shias and Hazara Shias. A week before tha a bus was blown up in Mastung, killing 19 killed and wounding 25. So insensitive are the Pakistani authorities that on such occasions, at times they do not even issue  a statement,  let alone take action.  The Pakistani political parties issued, seemingly hollow  customary statements of condemnation and seemed to have done nothing more.

The voice of conscience, in Pakistan, has been muted for years while thousands of Shia have been killed. Now the deafening silence has been pierced with the sounds of protests by the civil society in Pakistan as well as outside. The consciences were finally jolted into action by the relative of those innocent victims, who have refused to bury their dead until the government hands over security of Quetta to the army and dismisses the Provincial Government.  The shocked Hazara Community’s vigil beside the shrouded victims, in sub zero temperatures  has finally resulted in protests and  sit-ins in all major cities and towns of Pakistan in solidarity with the mourners and support their demands.    The Pakistan Bar Council has severely criticized the authorities for their failure to address the demands of the victims’  families of Quetta blasts and  appealed to their  members and bar associations all over the country to observe “Mourning Day” against the Quetta carnage on Monday.

All people of conscience cannot but call upon the Government of Pakistan not to drag their feet and offer protection to the persecuted Shia of Pakistan and address the grievances of the community. The world Federation joins the international Community in echoing the call of the  Hazara  Community that  they cannot, will not and must not  accept anything less than full restoration law and order and bring the perpetrators to  justice. While the action by Pakistan Premier Raja Pervez Ashraf to fire the Baluchistan government and impose Governor’s Rule is the first step , it is not enough.  Now the Governor must immediately arrest the perpetrators of attacks so and ensure that justice is done and the culprits are given exemplary punishment.

Mustafa Khokhar, the human rights minister said “The government has miserably failed to protect the rights of its citizens,”  We concur and call upon the Govt of Pakistan not to shirk its responsibility to its citizens and take all necessary measures to  address root-cause of the brutal aggression and arrest these murderers belonging to  Lashkar-e-Jhangvi, their patrons Sipahe Sahaba and other terrorist  groups.  It is also time that the Pakistani authorities take up a strong stand against external influences from where such groups receive the bulk of their funding.

Amidst the protests and details of the killings what is often overlooked is the human element and the impact on the families.  These are the painful words of a Hazara young woman, (published in the Dec 31, 2012 edition of the International Herald Tribune)  who lives in Quetta here is an  excerpt of the story she tells of herself and her community (1)

“I must share what it means to be a Shia Hazara. Today, I am going to share a bit of my story – the story of me and my people. When one of us comes in front of you, you mostly label us Chinese or Korean. Our complexions are not like yours, neither is our race or genetic composition. We are the ‘others’. And our pain is that of the others. We are Pakistanis but not considered a part of you. Very few will raise their voice for us, even when 27 of us are taken off a bus and are shot and killed just because we are Shias. Just because we have Mongol-like features. Just because we migrated here from Afghanistan. But what is the reality? How many of you can relate to 5 dead bodies being taken out of a house – father, brothers, sons. What do the women of that house go through? What is the future of these women? Of the Shia Hazara women? When they step outside the four walls of their homes once the men have been slaughtered, to earn a living because they have no other choice, vultures start circling. These are men who have been directly or indirectly responsible for lifting the roof off their heads. Responsible for killing the men in their lives. They offer help to these women in exchange for not cash but kind. I am one of those women.”