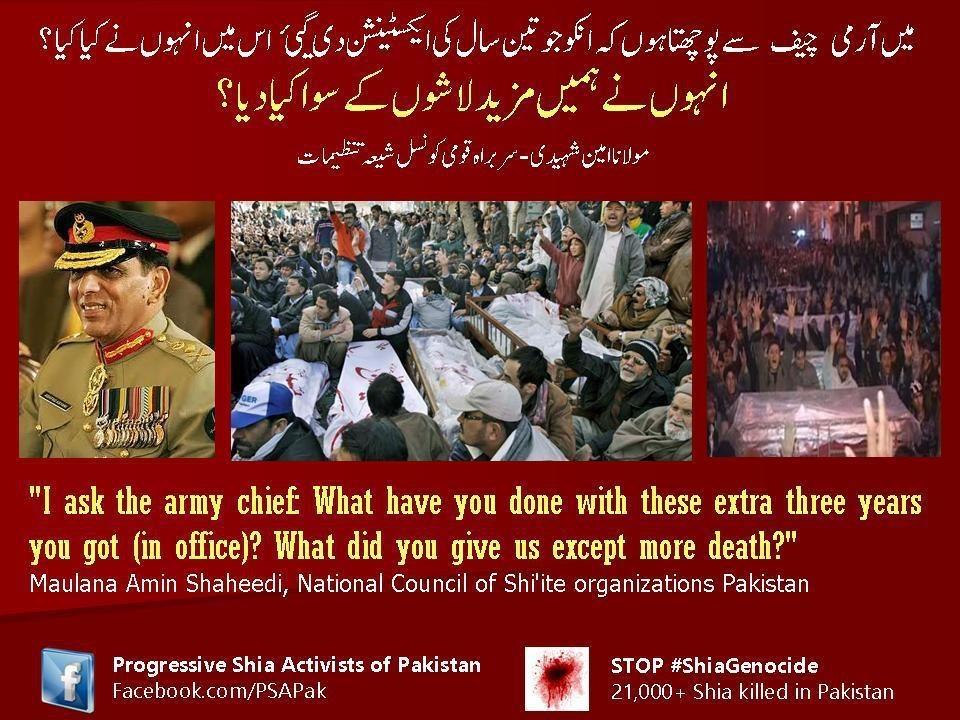 The February 16 carnage of 90 more Shia Hazaras in Quetta could have been prevented had the Frontier Corps (FC) and the police made concerted efforts to arrest a coterie of terrorists belonging to Usman Saifullah Kurd faction of the Lashkar-e-Jhangvi, as recommended in a secret dossier.

The dossier contained details about the planners and the attackers responsible for the January 10 killing of 100-plus Shia Hazaras in double suicide bombings on the Alamdar Road in Quetta.It was prepared by the Quetta Police following the imposition of the governor’s rulein Balochistan on January 14 in the wake of the four-day sit-in by the Hazaras.

The federal government had subsequently ordered the Frontier Corps and Quetta Police to take all possible steps for immediate arrest of Usman Kurd and other members of the Balochistan chapter of LeJ which is spearheading the ongoing reign of terror against the Shia Hazaras in Quetta and other parts of the province. The dossier carried specific information about the alleged masterminds of the Quetta January 14 suicide bombings, along with their pictures and likely whereabouts.

When the governor’s rule was imposed in Balochistan, the Frontier Corps, which works under the command of the Army, was also given police powers to arrest the criminals besides being made responsible for the security situation. The police were asked to assist the FC. The information contained in the secret police dossier about the LeJ network in Balochistan was also shared with the FC, with a proposal to launch a targeted operation against the anti-Shia terrorists without any delay.

However, yet another lethal suicide attack in a short span of one month, killing almost 100 more Shia Hazaras, has come as yet another failure of the law enforcement agencies which were tasked to maintain law and order.

It was in the wake of the American invasion of Afghanistan after the 9/11 attacks that the targeted killing of Hazaras by the LeJ had started in Balochistan. But the anti-Shia outfit has beaten its previous bests this year, killing almost 200 Shias in the first 45 days of 2013 in just two attacks in Quetta, compared with 152 Shias who had been killed all over Balochistan in 54 incidents in 2012.

The LeJ, which is allegedly being backed by the Ahle Sunnat Wal Jamaat (former Sipah-e-Sahaba Pakistan), openly issues death threats to Shia Hazaras in Balochistan and describes them as Wajib-ul-Qatl (liable to be killed). According to the information gathered by the law enforcement agencies, two splinter groups of the lethal Lashkar-known as Usman Kurd group and Shafiqur Rehman Rind group are active in Balochistan and targeting the Shia Hazaras by using their human bombs.

Interestingly, both Usman Kurd and Shafique Rind had escaped from a high security jail in Quetta Cantonment way back in 2008. While Kurd carries a Rs2.5 million head money, his second-in-command, Dawood Badini and Shafique Rind carry a reward of Rs2 million each respectively. Both Kurd and Badini were sentenced to death by an Anti-Terrorist Court of Quetta on November 8, 2003 for masterminding two terrorist attacks in Quetta that killed 65 people. Badini is the nephew of al-Qaeda’s former No3 Khalid Sheikh Mohammad and the brother-in-law of Ramzi Yousaf, the mastermind of the first terror attack on the World Trade Center in New York 1993. Ramzi was arrested from an Islamabad guest house in 1995 and extradited to the US. While Badini was nabbed by the Sindh Rangers from Karachi on June 12, 2003, Usman Kurd was arrested by the Criminal Investigation Unit of the Karachi Police from Mauripur area of Karachi on June 22, 2006.

During subsequent interrogation, Usman Kurd, s/o Muhammad Noor, had confessed to having trained a large number of target killers and suicide bombers to step up attacks against Shia Hazaras in Balochistan, especially in Quetta. Usman Kurd also confessed to planning dozens of suicide attacks on Shia religious processions and Shia imambargahs, besides having ordered the killing of professionals, police cadets and political activists. The sectarian attacks in Quetta had virtually been stopped following the arrest of Kurd and Badini. But quite unfortunately, both the LeJ men made good their escape under mysterious circumstances on January 18, 2008 after breaking the jail which was located in the high security zone of the Quetta Cantonment.

A subsequent report by the Minority Support of Pakistan (MSP), a non-partisan NGO which is devoted to building advocacy for the minority rights, alleged that all signs of escape pointed to orchestration from the powerful people. The reported added that the night Usman Kurd and Dawood Badin had escaped along with their third companion Shafiqur Rehman Rind [who was arrested in 2003], the Hazara guards were relieved of duty and the roster was abruptly changed by the jail bosses. While Rind was rearrested by the police six months later in July 2008, Usman Kurd and Dawood Badini remain at large and keep pursuing their anti-Shia Hazara agenda in Balochistan.

According to the Hazara Democratic Party (HDP) Chairman Abdul Khaliq Hazara, it is easy to predict where the anti-Shia attacks will take place in the provincial metropolis. Many such assaults take place in the Spini Road area which links Mehrabad to Hazara Town, one of the main Hazara enclaves which lies on the other side of Quetta city. He regretted that the assassins roar up on motorbikes without wearing masks, open fire, and are gone, never to be caught by security forces. Khaliq interpreted the failure of the law enforcement agencies, especially the Frontier Corps (FC) to stop the LeJ’s campaign as a sign that powerful people in the country were turning a blind eye, if not actively abetting the killers.

Many Baloch nationalist leaders in Quetta also castigate those wielding power for their failure to stop the killing of Shia Hazaras despite the fact that the FC literally rules the roost in Balochistan, especially after the imposition of the governor’s rule. The nationalists say the power in the province actually belongs to the FC which runs a parallel government. While blaming the FC for extra-judicial killings of Baloch activists, the nationalists say it should try to nip the evil of the LeJ in the bud. However, Maj Gen Obaidullah Khan, the FC commander in Balochistan, dispels the impression that the security establishment was not taking enough measures to uproot the LeJ network from Quetta and other parts of the province.

The IGFC Balochistan was recently quoted as saying: “The FC’s efforts to capture the wanted LeJ terrorists are hindered by the group’s ability to infiltrate Quetta from others parts of the province and return immediately after the assault. They (LeJ hit men) come from outside, remain here for a short time, operate and just vanish. Whenever we have got a chance, we have operated against them and we will not spare them. For us, there is no exception come what may”.