Home  »  Featured • Newspaper Articles   »   An 800kg bomb is not manufactured overnight. Where are the intelligence services? 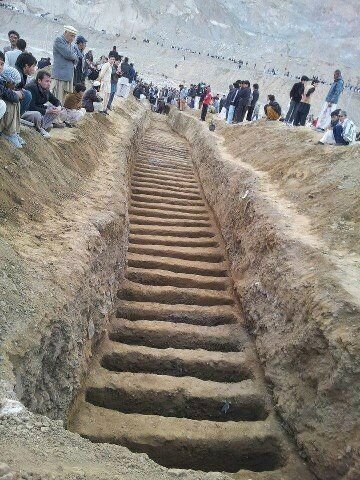 It is like waiting for death foretold. That is what the Shia Hazara community of Quetta lives with and prepares for constantly, taking pictures of friends and family members, hanging them on walls or placing them on mantelpieces, in preparation for a day when they may never see those faces again. And yes, that day of horror has come once again in Quetta.

We see blood, we see tears; and coffins and graves will follow, filling the graveyard in Hazara Town with yet more mounds over which people grieve. Terrible images have shown the full horror of the seconds and minutes that were the aftermath of Saturday’s bombing. Many bodies will be unidentifiable, having been rent asunder and reduced to shreds of anonymous flesh. This is what 800kg of high-grade explosives does when it is detonated in the middle of a crowded bazaar at the time of peak trading. At the time of writing, there are at least 80 dead, over 170 with varying degrees of injury and an unknown number missing, some of whom will have been — literally — vapourised. They will never be found and there is nothing left to bury. Mere words cannot convey the horror of the scene and mere words can never assuage the grief and anger that will be added to the ever-deepening well of despair felt by Hazara Shias. Neither can mere words express the profound disgust at the deliberate and willful targeting of civilians. And yet nothing is done. Lashkar-e-Jhangvi — driven by hate, crime, expediency and a lust for blood — has immediately claimed ‘responsibility’ for the carnage. And yet nothing will be done.

The Shias in Quetta and elsewhere will be asking some questions. Where are the parties, politicians and leaders they elect to serve them when they are being served with their own blood and bones by those committed to genocide? Where are the organs of state security when it comes to their protection? An 800kg bomb is not manufactured overnight. Where are the intelligence services? How can the Shia Muslim community feel any sense of security and who can blame them if they vent their anger at those organs of state that have so comprehensively failed them time after time? Elders of the Shia Hazara community have said that they will take their protests global — to Washington and London and to any other capital that might give their voices a hearing. Shutterdowns, strikes and even the refusal to bury the dead have proved to be ineffectual. Over 259 Shia Muslims have died so far this year in sectarian attacks by Takfiri Deobandi militants of Ahle Sunnat Wal Jamaat (ASWJ, LeJ, also known as Sipah-e-Sahaba). Nobody has been arrested. No suspects named and the killers trumpet their success. The suspicion that somebody somewhere is not trying very hard to do anything about this is inescapable.

It is clear that the governor’s rule imposed in Balochistan has solved nothing. It was never going to. The dismissal of an inept government does not mean things will change as if by magic. In fact we can say with certainty that there will be more death in Quetta. But this is not destiny. We can change reality rather than live with it. We need to ask why there has been no action against top LeJ leaders in Punjab, Balochistan and elsewhere. Why are they tolerated? The answer to sectarian killings is to go, with force, after those who perpetrate them and take pride in doing so. Should there be a sense of shame somewhere in the state’s corridors of power? We as citizens too need to lobby for this sense of shame to be born and felt, to press for action, to hold together a society which is falling apart even as we look on at one tragedy after another.

The focus of our counter-terrorism debate has always been the TTP and its base of operations in the tribal areas. Far less attention is paid to the other militant groups that are terrorising the country and as a consequence they are able to operate without hindrance. The February 16 bombing in Quetta, which targeted the Hazara Shia community and killed 80, should hopefully end the silence. The Lashkar-e-Jhangvi (LeJ) claimed responsibility for the attack, as they have for many dozens of previous attacks against Shias. This outfit is on a mission to eradicate the Shia community and yet the state is unwilling to take action. The LeJ operates freely throughout the country and its leaders address rallies without worry.

The Shia community, meanwhile, has to live in a constant state of fear and insecurity.

There was a time when the military financially and diplomatically supported anti-Shia militant organisations because they were willing to send people to fight in Kashmir. That policy turned out to be an unmitigated disaster and was even officially disavowed by Pervez Musharraf. These groups may no longer fight in Kashmir but are still waging war against Shias. And yet their former patrons either continue to support them or remain silent about their atrocities. False accusations are flung around, accusing the Shias of being more loyal to Iran than their own country and this is then used as a pretext to justify their killings. At the same time, no one seems to care that these anti-Shia terrorist groups are possibly receiving funding from another foreign country – Saudi Arabia.

The last time there was a heinous attack on the Hazara community, a series of inspiring sit-ins around the country sent out the message that we will not stay silent any longer. As heartening as these shows of solidarity were, they will never be sufficient on their own. Only the state has the power and ability to tackle extremist groups. The solution requires a blend of intelligence work, military action and better law enforcement. It is just the will that seems to be lacking. Until the gravity of the situation is recognised, Shias will continue to be slaughtered and the groups targeting them will become even more powerful and untouchable.