When powerful provincial government ministers in the Punjab loot their coffers for cosmetic projects, one can rest assured that some of that budget is also allocated to opportunist sychophants and flatterers in the media and NGos / thank-tanks.

While there is no proof that money was exchanged between PML-N government in the Punjab and some good liberals, one was shocked to read Raza Rumi’s (Director of Sherry Rehman’s Jinnah Institute and Editor of Najam Sethi’s The Friday Times) flattery for the Lashkar-e-Jhangvi facilitator and Punjab’s Chief Minister, Shahbaz Sharif. https://lubpak.com/archives/233275

While there is no evidence that Raza Rumi also receives funding from the Punjab Government like Malik Ishaq (LeJ-ASWJ), nothing else made sense for his flattery of Punjab Government in Express Tribune and his usual flattery of PML-N leaders on Twitter. This is in addition to his promotion of the the Deobandi cleric who secured Malik Ishaq’s release from the Lahore jail as a progressive cleric. 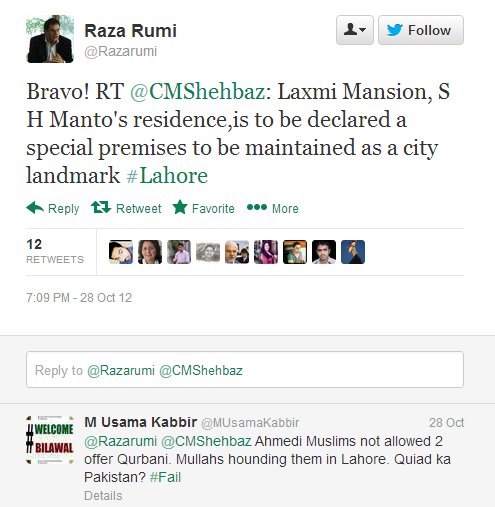 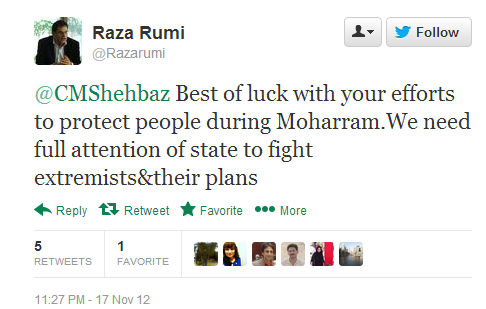 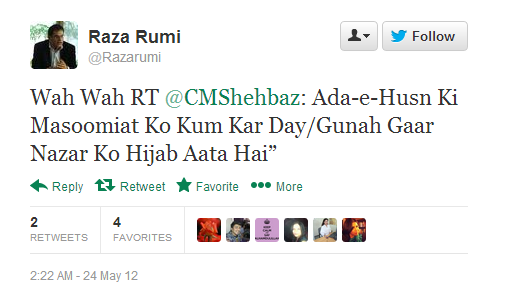 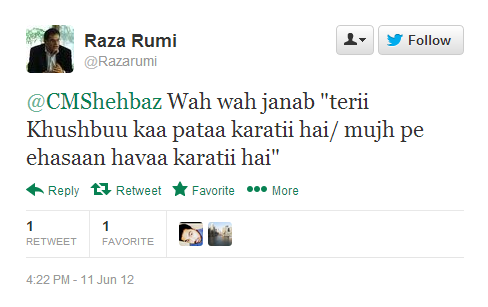 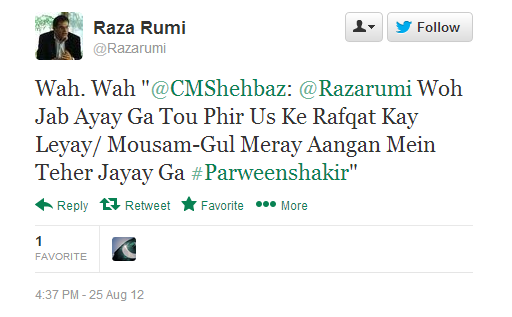 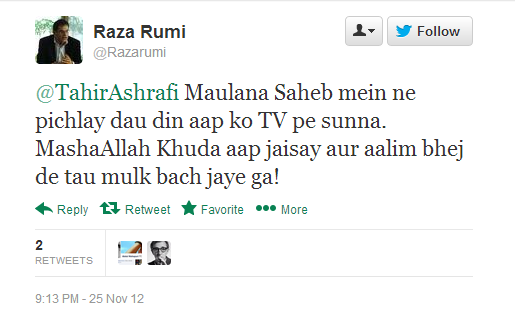 Today, even when confronted on his vague tweets on Shia Genocide, Raza Rumi refused to name the PML-N and the Sharif Brothers as culpable in Shia Genocide. Instead, he used the term of “appeasement” as opposed to the more direct term of collaboration and alliance between PML-N and ASWJ Takfiri Deobandi terrorist. Appeasement is not as direct a word and is more applicable to the PPP government who are spineless on this issue. The PML-N leadership, on the other hand, is not spineless, but directly complicit. 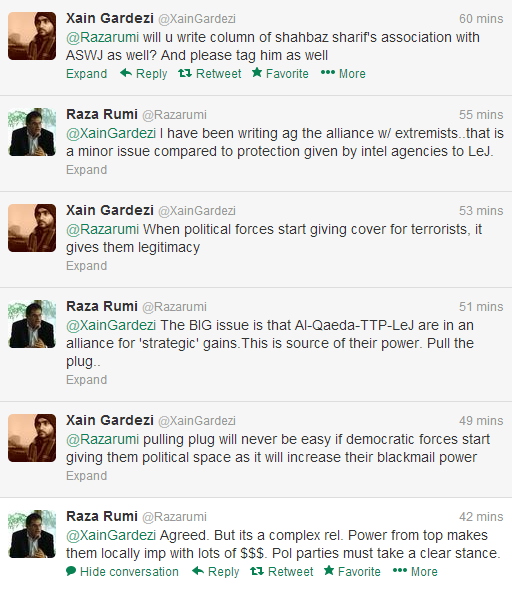 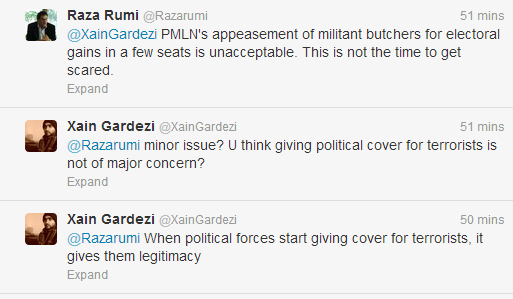 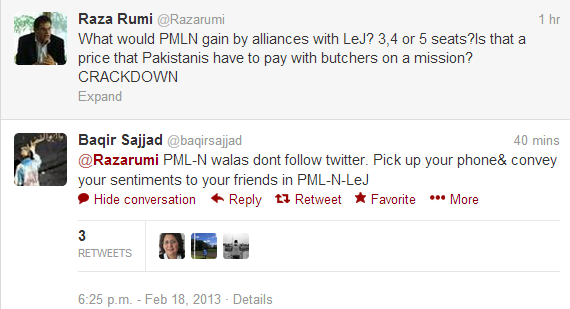 The phenomenon of Shia genocide (more than 21,000 Shias have been killed so far in addition to thousands of moderate Sunnis, Ahmadis, Christians etc, all of whom have been killed by Takfiri Deobandi militants of ASWJ-LeJ-TTP) cannot be seen in isolation from the fact that PML-N government in Punjab and its loyalists in the judiciary continue to release Takfiri Deobandi terrorists including Malik Ishaq, Qari Saifullah Akhtar, Molvi Abdul Aziz etc.

In recent years, there has been a series of systematic murders of Shia Muslims in the Punjab province including two major attacks in Khanpur (Rahim Yar Khan) and Rawalpindi, and target killing of Shia professionals in Lahore. Only today (18 Feb 2013) an eye specialist Dr. Ali Haider and his 12-yr old son were killed in Lahore cantonment. However, Raza Rumi (and certain other good liberals known for promoting Shahbaz Sharif and/or pro-ASWJ clerics) did not find it it fit to tag Chief Minister Shahbaz Sharif, Marium Sharif or pro-ASWJ Deobandi cleric unlike previous occasions when he directly tags them in expressing his appreciation for their great political or progressive credentials or great taste in literature. Different standards on different occasions clearly.

Instead of clearly condemning LeJ, its political front ASWJ, and patron PML-N, Raza Rumi found it convenient to describe the whole situation as too complex and blamed Shia genocide on a fluid, unidentifiable body Al Qaeda. This is tantamount to obfuscating Shia genocide by deflecting the attention from actual and self-professed killers, i.e., Takfiri Deobandi terrorists of LeJ and ASWJ and their political patrons in PML-N (and other Islamist groups).

These 3 articles show how pro-establishment fake liberals enable or contribute to Shia genocide in Pakistan:

It’s usual for pro-establishment Fake Liberals to present and promote themselves as anti-establishment in order to repair their discredited standing. This is their typical method. Remember, the so called attack on Hamid Mir’s car! Here’s another example: Omar Waraich (member of Najam Sethi group) presents three anti-ISI heroes of Pakistani media http://pakistanblogzine.wordpress.com/2011/09/14/omar-waraich-presents-three-anti-isi-heroes-of-pakistani-media/

At least, the term Shia Genocide is being used now. Just months ago, the same good liberals were blaming Shias for their own genocide by misdirecting the debate into tangents. For example, while similar incidents of Shia genocide were taking place just months ago, Raza Rumi kept stressing that two Shia clerics were initially invited to take part in the Difa-e-Pakistan Council (DPC). The fact is that even though they were invited, the disassociated themselves from the DPC when they came to know who the other participants were. However for Raza Rumi to highlight this shows the typical tactic of diluting and misdirecting outrage. Unlike these two Shia clerics, Raza Rumi and his “good liberal” comrades continue to promote pro-ASWJ cleric as a moderate and progressive mullah. 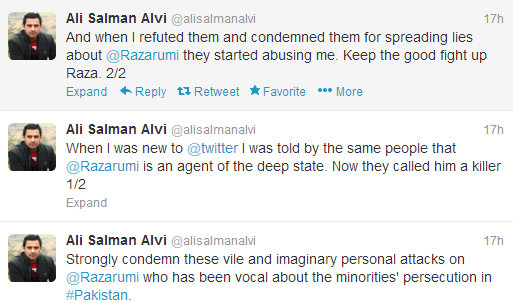