Home  »  Newspaper Articles   »   Going to Tehran: Why the United States Must Come to Terms with the Islamic Republic of Iran

An eye-opening argument for a new approach to Iran, from two of America’s most informed and influential Middle East experts

Less than a decade after Washington endorsed a fraudulent case for invading Iraq, similarly misinformed and politically motivated claims are pushing America toward war with Iran. Today the stakes are even higher: such a war could break the back of America’s strained superpower status.

Challenging the daily clamor of U.S. saber rattling, Flynt and Hillary Mann Leverett argue that America should renounce thirty years of failed strategy and engage with Iran—just as Nixon revolutionized U.S. foreign policy by going to Beijing and realigning relations with China. 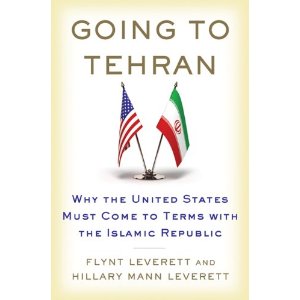 Former analysts in both the Bush and Clinton administrations, the Leveretts offer a uniquely informed account of Iran as it actually is today, not as many have caricatured it or wished it to be. They show that Iran’s political order is not on the verge of collapse, that most Iranians still support the Islamic Republic, and that Iran’s regional influence makes it critical to progress in the Middle East. Drawing on years of research and access to high-level officials, Going to Tehran explains how Iran sees the world and why its approach to foreign policy is hardly the irrational behavior of a rogue nation.

A bold call for new thinking, the Leveretts’ indispensable work makes it clear that America must “go to Tehran” if it is to avert strategic catastrophe.

As the war of words over Iran’s nuclear ambitions threatens to spiral into violent conflict, objective analysis of the Islamic Republic’s policies, intentions, and capabilities has never been more necessary-or more difficult to find. The Leveretts, who since leaving government service have become increasingly enthusiastic proselytizers on behalf of Tehran, offer an analysis, but not one easily classified as objective.

Fashioning their latest polemic as a shot across the bow of the prevailing orthodoxy regarding “the most critical country in the world’s most critical region,” they call for a reset in relations and substantial engagement rather than saber-rattling and sanctions.

Although some of their points are well-taken, they cast every assertion by an Iranian official in glowing terms-Ahmedinejad, they say, could not possibly be seeking nuclear weapons, since, in his view, they violate Islamic morality. They accuse the American government of “shameless duplicity” but their celebration of Iran’s “significant progress toward the integration of Islamic governance and participatory politics” obfuscates the difficulties standing in the way of rapprochement.

This is a well-written, frank, and courageous book. The master idea is that there are unpleasant times ahead for the US unless it changes its policy from a hegemony-oriented policy to a modus-vivendi-oriented policy. The conclusion of the book is: it’s time for an American president to go to Tehran.

It offers an unorthodox analysis of Iran and is a scathing criticism of the US’s foreign policy. The authors argue that the US is simply on the wrong trajectory leading to very unpleasant outcomes. The Grand Strategy of the Obama’s administration (like the admins before him) has been to effectively a “regime change” in Iran. It has been endorsed and pursued semi-silently, not openly.

The strategy is to topple the Iranian regime “by other means” and replace it with a puppet regime made of the Iranian émigrés, cranks, Saudi-backed militant lunatics and double-agents.

This unpleasant compote we can observe today in Syria. The strategy is extremely ill-advised. The “other means” are: 1] a run on the Iranian currency 2] sanctions and embargoes against Iran 3] cyber-weapons and “worms” targeting Iran’s nuclear facilities 4] targeted assassinations of top Iranian nuclear scientists. 5] sanctions against Russia, its banks and firms doing business with Iran.

This strategy may prove successful. But the collateral damage will be very unpleasant for the US. Apart of putting the world of international relations in flames, one of the victims will be the relations with Russia — my former country — which has been already much frayed because of the conflict in Syria and the US’s support of the anti-Putin opposition last year.

Put it in the context of the Sunni-Shia struggle in Syria, where the US is siding with the Sunni Gulf states against Iran and Russia — unwisely in my view — and it looks like a devil’s brew.

There will be no winners, we can be sure of that. The US would be much better off by talking to Iran seriously. This book is calling for this persuasively. Are there defects in the book? Sure, but the pluses of the book by far outweigh its minuses. The US policy-makers need to hear criticisms like that.