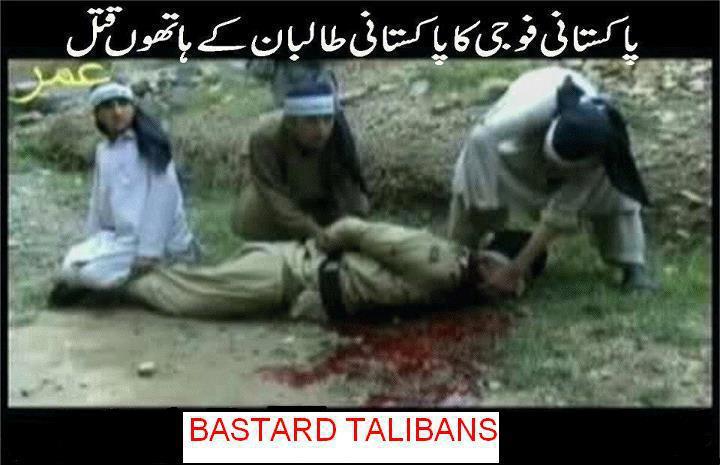 Not long ago I was involved in a debate pertaining to the culling of sled-dogs in North Vancouver. I, like many others, was of the opinion that the media must not exhibit the gory images of the dogs culled, as it serves little purpose. Instead, I argued, we should use such information with a sense of responsibility and discretion and focus more on the measures that obviate such happenings in our midst.
Then a friend sent me this picture depicting the beheading of a Pakistani soldier and I was jolted to suddenly realize the contrast in the two worlds I straddle, from the only country ever created in the name of Islam to the modern Western civilization.

I was shocked to see that I who opposed revealing the depiction of dogs’ culling found it appealing to reason that this picture representing the truth must be revealed to the people I know and who I thought could emotionally handle it. This is another world – a world different from that of sled-dogs I started this piece with. This is a world requiring us to deal with innocent Shias and others being culled with less mercy than is afforded to rabid dogs. This is a world in which the killers record and release such images hoping that we the normal human beings will be devastated by their depiction of the pain they can inflict on us.

We are dealing with a barbaric society, and we must show the full extent of barbarism. Where beheading is not an exception, it is the norm. So are shooting and maiming. In this world any path to redemption leads through a confrontation with the reality and not through its circumvention. Revulsion to truth should not be used as an excuse to suppress it. We should draw a line when a truth is an exception. But when it represents a society or a system, as in this case, we must not hide a reality because it is embodies an inconvenient gory truth of the life we must contend with.
These nuts hate people. It’s that simple. To them humanity is a problem that needs to be dealt with by starting with beheading all the Shias first.
In fact the despair that our current state of affairs engenders makes me avoid writing on current issues and focus only on academic debates. However, I think I ought to briefly share why I think that this incident is not a total aberration and reflects what we are collectively capable of. For instance, one friend objected that the method adopted to kill was very brutal. As if that is all what mattered. This probably implied that if this soldier was shot dead like others, then it would probably be more ‘humane’ and ‘acceptable’.

Hence it is the imagery of the act that disturbs most people and not the intent. What a society, this republic? As if Shias being taken off from the buses and being shot dead after identification, as a large crowd views with glee and chants in orgasmic delight, is any less barbaric than this.
The act is consistent with the beliefs of many of our middle and upper classes even though they have personally never raised a finger on someone. If we believe that people (Jews, Christians, Ahmedis, Muslim sects and who not) deserve to and should be killed for religious differences and political variances then why not this young soldier for the crime of belonging to an LEA? This is not an isolated incident. There have been many like this, some of them in large cities like Karachi. These appalling acts of barbarism are being perpetrated for the past several years and all our so-called liberals do is express revulsion to such images.

It is frightening to even imagine what our society would become if we were all allowed to live by our prejudices, our revolting sense of moral superiority, our notions of justice and religion, and our view of minorities. Luckily our politicians and generals cannot allow that to happen because firstly they need a territory which they can govern and plunder and secondly they have to be mindful of how the rest of the world views us because they/we badly need the rest of the world. Hence they govern, and we live, by the force of opportunism and not by the imperative of justice.

Such acts are symptomatic of a deep-rooted barbarism that now afflicts our society. This barbarism or extremism cannot be ripped up on a selective basis. To me ‘intolerance’ is the word that best defines our society and our biggest problem. The growth of intolerance over the more recent decades of our existence has outstripped that of economy, literacy, population, corruption, graft, nepotism and everything else. What about the generation that is now growing up in the climate of such extreme intolerance and prejudice? To what extent will they carry it? That we are so intolerant and vicious as a human society is probably not an American/Jewish/Indian conspiracy. Or is it?

The only way to grow beyond this state of affairs is through sincere introspection. Hypocrisy, self-righteousness, denial, and pointing fingers at the rest of world, for their real or perceived failings, will not do.