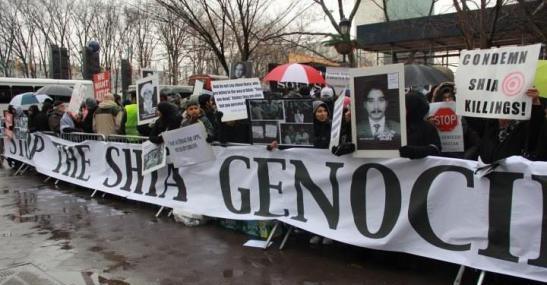 Pakistan’s Newest Martyrs: Why Anti-Shi‘ite Violence May Be the Country’s Biggest Problem
– by Omar Waraich

For days, they refused to bury their dead. On a main road in the southwestern Pakistani city of Quetta, hundreds of mourners from the local Hazara community, adherents of Shi‘ite Islam, watched over the nearly 90 coffins in below freezing temperatures. The victims of an increasingly bloody wave of terror were no longer willing to inter the corpses of their loved ones for the world to forget about them.

Among the dead was Irfan Ali, a brave and much liked young activist who had to abandon his education because of the appalling security situation in the province of Baluchistan, where Quetta is the capital, yet devoted much of his time telling the world about the suffering of his people. Last Thursday, Ali felt he had cheated death the first time. He tweeted that he had narrowly escaped a bombing in Quetta. When he went to tend to the victims, a second deadlier blast struck the billiards hall in Quetta, raising the death toll to nearly 100. It was the greatest single tragedy to visit the community.

The tragedy jolted many Pakistanis, bringing tens of thousands around the country out onto the cold streets. Protests and candlelight vigils sprouted in many cities. Ali, the slain activist, was a familiar face at such protests. In recent photographs, he was seen holding up the image of a Pashtun politician, who was assassinated by the Taliban last month. This time, many protesters held aloft portraits of Ali’s smiling face, some adorned with words from his Twitter bio: “I am born to fight for human rights and peace. My religion is respect and love all the religions.”

The protests were eventually heard. Some of the largest crowds had gathered in Karachi, outside the private residence of President Asif Ali Zardari. On Monday, the government dispatched Prime Minister Raja Pervez Ashraf to Quetta to meet with the victims. Chief Minister of Baluchistan Nawab Aslam Raisani, a figure of clownish incompetence with a taste for the good life, was told there was no job waiting for him when he returned from his latest foreign jaunt. The provincial government was sacked, having forfeited its mandate. And a form of emergency rule imposed under the province’s more stolid governor.

(MORE: War in Mali: France Can Bomb Militants, but Not Arms Routes)

It was enough to persuade the families of the Hazara victims to bury their dead, but more will need to be done to stop others from being sent to an early grave. Last year (2012), over 400 Shi‘ites were killed across Pakistan [according to another estimate, the number is 1450 Shias killed in 2012 in Pakistan]. A significant minority in majority Sunni Pakistan, Shi‘ites comprise roughly a quarter of the country’s population. At least a quarter of the recent death toll belongs to the Shia Hazara community in Baluchistan, who migrated there over a century ago from neighboring Afghanistan. Seeking safety, many have been making journeys onward. Last Thursday’s attacks, though deadlier than previous ones, were depressingly familiar.

In recent years, Shi‘ite pilgrims from the Hazara community (as well as Shias of other ethnic backgrounds) have been hauled off buses bound for pilgrimages in Iran to be lined up and summarily shot. In other parts of the country, as far apart as Karachi in the south, Lahore to the east, the northern hills of Gilgit, Parachinar near the Afghan border, and Dera Ismail Khan in the northwest, Shi‘ite worshippers have seen their processions routinely attacked.

On each of these occasions, Shi‘ite worshippers had gathered in the streets, as they have done for centuries, to mourn the memories of their ancient martyrs. They left having to mourn the loss of new ones. The seventh century massacre of their most revered saint, Imam Hussein, and his followers, becomes not just a retelling of the foundation of their faith. It is relived as a parable for the present, the story of a vulnerable minority brutally slaughtered for its beliefs.

The responsibility for these attacks has often been claimed by Lashkar-e-Jhangvi (LeJ), probably the most dangerous group operating in Pakistan today, and its militant allies. LeJ began life as an even more vicious offshoot of the banned anti-Shi‘ite Deobandi organization, the Sipah-e-Sahaba Pakistan (SSP) (currently freely operating as Ahle Sunnat Wal Jamaat ASWJ). A decade ago, the group found common doctrinal ground with newcomers from al-Qaeda and proffered its deep and pervasive network. Al-Qaeda maintained operational control, LeJ supplied the foot soldiers. The lethal combine has been blamed for attacks such as the 2008 bombing of the Islamabad Marriott and the 2009 Lahore attack on the visiting Sri Lankan cricket team.

The failure to stop these militants is the collective failure of Pakistan’s power elites: the politicians, the army and the judiciary. Less than 24 hours after the Quetta attacks, Malik Ishaq, a notorious LeJ leader, was in Karachi inciting further anti-Shi‘ite hatred. “I don’t have fun making speeches,” the self-confessed killer of Shi’ites told his supporters. “You know what I have fun doing.”

Ishaq was shockingly released from prison in 2011 after the courts said they didn’t have enough evidence to convict him. As is often the case, witnesses are not protected and are either eliminated or reduced to a terrified silence. The prosecution and the police fail to marshal the evidence necessary to support a conviction. There are also questions that analysts raise about Islamabad’s intelligence agencies’ links to sectarian groups like the LeJ and its parent organization, the SSP.

Ishaq has barely been prevented from roaming around freely. He was briefly taken into custody once only to be released again. He and his cohorts are also the beneficiaries of sordid deals with Pakistan’s power elites. When the army’s headquarters were under siege in 2009, Ishaq was reportedly flown from prison to help negotiate a stand-down. The Punjab government, lead by the opposition Pakistan Muslim League-N, has courted votes alongside leaders of the anti-Shi‘ite SSP.

The failure of Pakistani authorities to protect the Shi‘ite population and act against their killers is eroding faith in the state and its institutions. Their failures amount, as Human Rights Watch has said, to complicity. It also raises troubling questions about Pakistan’s identity. In 1947, after the partition of the subcontinent, Pakistan was founded ostensibly as a state for the region’s Muslims — and the minorities that live there. The founder, Muhammad Ali Jinnah, was himself a secular man of a Shi‘ite background.

Over the decades, various minorities have found themselves under siege. Prejudiced laws against the Ahmadi Muslim sect have seen the group’s leadership take exile as its followers have either abandoned the country, fall foul of its blasphemy laws or lose the loved ones in terrorist attacks by the same groups that have targeted the Shi‘ites. The beleaguered Christian community fares no better, similarly trapped between militant violence and laws that make them vulnerable to persecution. The old Parsi community has dwindled sharply, with an estimated three times as many living in Toronto as do in Karachi.

For the Shi‘ites, it was supposed to be different. They have long lived peacefully alongside the majority Sufi-inspired Sunni community, marching together at the same annual Muharram processions. There were always levels of prejudice, with bigots comparing Shi‘ites to “cockroaches” and hard-line Deobandis — adherents of a puritanical South Asian strain of Sunni Islam — declaring them heretical. But the Pakistani mainstream never considered them a separate minority. In public, for example, Shi‘ite politicians are not identified by sect.

If, however, Shi‘ites are not going to feel safe in Pakistan, it will have grave consequences not just for the country but also the wider region. Pakistan’s Shi‘ite population is second only to neighboring Iran, where Shi‘ites are the majority and Shi‘ite Islam is embedded in the heart of the country’s politics. In the long term, it could be the most destabilizing of all of Pakistan’s problems — with the violence not restricted to a remote borderland, but tearing into the country’s very fabric.