The tide of Shia genocide in Pakistan – by D Asghar 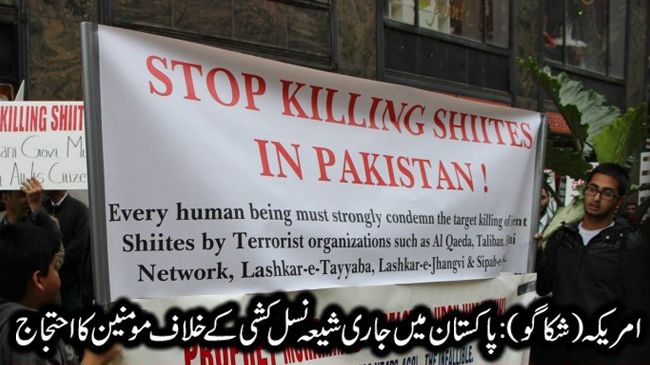 When a fellow writer on Twitter retweeted a remark as satire, it just resonated with me and perhaps with many others, very loud and clear. In the wake of shameful killings of many Shias in Quetta, it said, “Remember Pakistan was created to protect the interests of Muslims of the subcontinent.” Very sadly, looking at the entire former subcontinent, where Muslims are in most peril is no other place than Pakistan. No, I am not going to bore the readers with the usual rhetorical history and the reasons for all this mess. By now, most people know about the root causes and those who do not either are downright ignorant or fail to overcome their tall egos to embrace the reality. When people in our parts of the world deny the existence of the Holocaust and Hitler’s extermination of Jews, they demonstrate their mental calibre. What happened after that is a known fact. A mighty, well-armed and ferocious Hitler was unable to wipe out the Jews. So the ones in our land who are denying what is rightly termed as ‘Shia genocide’ are actually aligning with the wrong side of history. Those who are hell bent on exterminating the Shias of Pakistan must take a lesson or two from history. I am afraid it is wishful thinking on my part. The history that I am referring to is rejected as a fabrication of Yahood and Nasara (Jews and Christians) by the faithful.

When an acclaimed and one of my favorite writers Mohammed Hanif said, “Had Mr Jinnah, the great Quaid-e-Azam been with us right now, he would be running for his life for being a Shia,” he is absolutely on the dot. My intent is not to regurgitate what I have been advocating for a few years at various venues. As these lines are being written, the protestors have not left the Alamdar Road in Quetta for the last four days. Hats off to the protestors, who have refused to bury their loved ones so they can get the attention of a toothless government and perhaps demonstrate their heart-wrenching plight to the entire world. It is beyond unfortunate that a PPP-led government that has been a victim of this gruesome scourge of terrorism itself has been quite incapable and ineffective. When it comes to playing the victim at Garhi Khuda Buksh on almost all anniversaries of their slain leaders, they do not hold back one bit. But when it comes to taking any concrete measures to prevent such attacks, they act as besieged spectators. Even if the so-called long march and this horrific incident are perhaps interrelated and part of some grand conspiracy to dislodge the democratic setup, it is disheartening to see the otherwise slick and smart president perhaps acting helpless.

It took an opposition leader, Imran Khan, to reach Quetta to show solidarity with the victims to move the prime minister and his associates to follow his lead. This prime minister sets a very poor example. The honourable president’s dismal reaction is also very perplexing and equally depressing. One can only hope that both leaders of the state can be with the people to chant in the same manner: ‘Balochistan Khappay’ and ‘Shia genocide is unacceptable’. As I said on twitter and I will repeat here, there comes a time where all politics and careful moves have to take a backseat. The inefficiency and inability to mingle with the victims, to alleviate their concerns and to take effective and corrective measures to prevent such horrific incidents from being repeated in future will haunt the present government at the ballot box. Make no mistake, the opposition will capitalise on this disaster and sway public opinion in their favour. But mark my words, they will not be able to accomplish much either, if they ever make it to Islamabad. Here are a few of the reasons. Society, as a whole, is so immune to religious bigotry and hatred that it is all considered business as usual. So long as militant groups with prefixes like Lashkar, Jaish and Sipah are operating with blanket impunity, there is no hope. Unless the general public and above all the clergy and their religio-political parties stop fanning the rampant discriminatory behaviour, all these sit-ins are futile. Until and unless textbooks preparing the future leaders with half-baked truths are revised, the future of this nation remains bleak.

It may hurt a few, but what the heck. Every time such incidents occur, the social media goes abuzz with who has and has not condemned such genocide. It is beyond foolish to expect that those who are killing people based on their perverted logic give heed to what any of these good for nothing politicians say or their condemnations. The hate mongers say it clearly that they will continue their agenda, come what may. So without a comprehensive counter-religious fanaticism plan and a targeted anti-terrorism policy, no matter who sits in the Aiwan-e-Saddar, it will be the same old but painful story. The ill-equipped law enforcement agencies cannot match the sophisticated explosives and weaponry of the terrorists and hate mongers. Try whatever rule — elected, governor, or this land’s most revered, the military, it is a recipe in futility. By the way, citizens who are fuming on social media or yelling at the sit-ins, a word for you as well. The slogans will not do a darn thing until you fork out your fair share in taxes to demand corrective measures. A country where a fraction of the population pays its fair share in taxes has to be living in a fool’s paradise to expect miracles. Simply put, you get what you pay for. Nothing in this world is free. It never has been and never will be.

The writer is a Pakistani-American mortgage banker. He blogs at http://dasghar.blogspot.com and can be reached at dasghar@aol.com. He tweets at http://twitter.com/dasghar