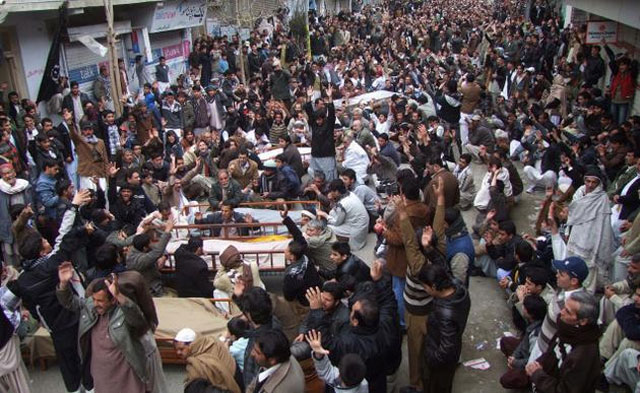 At a time when a national consensus was coalescing against the jihadists, the PPP and its coalition partners squandered yet another opportunity to take charge

Once again, the Hazara Shia, perhaps
the most peaceful community in Pakistan, has come under the most violent attack. The twin bombings targeting a snooker club frequented by the Hazara youth on Alamdar Road killed nearly a hundred people last week. Most of them were young men and perhaps sole breadwinners for their families.

It was a profound disappointment to see that the very next day most Pakistani newspaper websites had relegated the Quetta carnage news to the number three or four and virtually faded out the news of the Mingora bombing that had killed 22 Pashtuns. The tele-media had continued with its coverage of Tahirul Qadri’s antics and nearly dropped the Quetta bloodbath from the news cycle. Two things happened then. The Hazara Shia decided to take a novel but heart wrenching approach to protest. While the Shia custom is to bury the dead as early as possible, the Hazara — men, women and children — took to the streets in protest with scores of coffins. The freezing cold of Quetta, dark shadow of the night and grief-stricken faces of the mourners — the imagery was moving and powerful enough to move even the most stoic.

The other thing that happened was that the social media, especially Twitter, discovered that it had lost one of its own. Irfan Ali known to many of us by his Twitter handle @KhudiAli had been martyred in the second bombing in Quetta when helping those targeted in the first explosion. Irfan was the quintessential activist: tweeting, blogging, writing, protesting to raise awareness not just about the hellhole that Quetta has become for the Shia but for the oppressed across the board. Irfan’s martyrdom was too close to home even for those who generally remain away from political issues. The barrage of tweets and images from Quetta that followed did appear to have an impact on the traditional media, which started reporting about the ongoing protest there. Within hours, vigils and protests were arranged via social networking websites and groups started with as few as five people began gathering in various Pakistani cities and indeed around the world to show solidarity with the Hazara Shia.

The social media clearly kept the traditional media on its toes and in a way acted as the watchdog keeping a check on it. But despite that, the Pakistani conventional media (honourable exceptions aside), and some foreign outlets like the BBC Urdu website, misreported the tragedy. Most of the traditional media just could not bring itself to report honestly that the victims in Quetta were targeted and killed because of their faith, for being Shia. The racial features of the Hazara and their geographical location in what have become two ghettoes in Quetta make them an easy target no doubt, but it is their set of religious beliefs that makes them fair game for the perpetrators. One cannot say with certainty whether the media is in denial or ignorant about the ongoing Shia genocide, is complicit with or scared of the killers. The reluctance to identify the victims for who they were is unprofessional, unethical and outright inhuman and most importantly skews the narrative. However, the ultimate responsibility to build the accurate narrative rests with the political leaders who, barring a few notable exceptions, were conspicuous by their absence.

The Pakistan People’s Party (PPP) has presided over the wholesale killings of the Shia without letting out as much as a whimper. The party’s top leadership did not have the courtesy to rush to Quetta to condole with the devastated families, many of whom are its voters. The now-defunct Balochistan Chief Minister Aslam Raisani — a heartless and inept man — refused to resign and return to the country from his vacation. The provincial chief executive going AWOL creates not just a constitutional but also a moral vacuum at the time of such a national tragedy. Unfortunately, the PPP leadership did nothing to patch the gaping hole that the absconding Raisani has left in whatever remains of the party’s credibility. At a time when a national consensus was coalescing against the jihadists, the PPP and its coalition partners squandered yet another opportunity to take charge. The PPP’s answer to the Quetta calamity was invoking Article 234 to impose Governor’s rule in Balochistan. It literally gave more powers to those who have already been running the disastrous show in the hapless province.

Granted that with Raisani refusing to resign there was no other immediate constitutional remedy available other than Governor’s rule. An in-house change would have been too messy and too late. But there were other steps that the PPP leadership could have taken. Sacking the IG Frontier Corps Balochistan — something the PPP’s own MNA, the upright Nadeem Afzal Chan and his parliamentary colleagues had demanded — would have been a start. It is inconceivable that the Lashkar-e-Jhangvi (LeJ), which has accepted the responsibility for the bombings, can operate with impunity in a garrison city like Quetta. The Alamdar Road where the Shia were killed and the Hazara graveyard where they were buried in mass graves after four days are minutes away from the cantonment and the sprawling army complexes.

One gets a sinking feeling that more powers to the Frontier Corps would result in more Baloch nationalist deaths and no protection for the Shia. The security establishment has been trying to get an even bigger footprint in Balochistan and the PPP has provided it just that. The PPP might retort that it was merely granting the Shia protestors’ demands. However, there were 13 demands of the Shia Hazara community of which the most important ones the PPP has skirted, i.e. a targeted operation against the LeJ and ban on its mother party, viz. Sipah-e-Sahaba Pakistan (SSP), which freely operates under the name Ahl-e-Sunnat-wal-Jamaat (ASWJ), and its leaders. The LeJ terrorists like Malik Ishaq are spewing anti-Shia venom freely around the country while the ASWJ leader Muhammad Ahmed Ludhianvi is frequently seen at his side.

The army had thrown the gauntlet to the civilians to come up with a plan to fight terrorism that the military will then implement. Now, when the nation was coming out of its slumber and closing ranks against the hate and terror of the LeJ, was the time to take up the army on its offer. The three days of peaceful but heart-rending Hazara Shia protest shook Pakistan, but not quite. The leadership failure is a predictor of more such disasters to follow. The Hazara would be well advised to cast their lot with their oppressed compatriots in Balochistan.

The writer can be reached at mazdaki@me.com and tweets @mazdaki