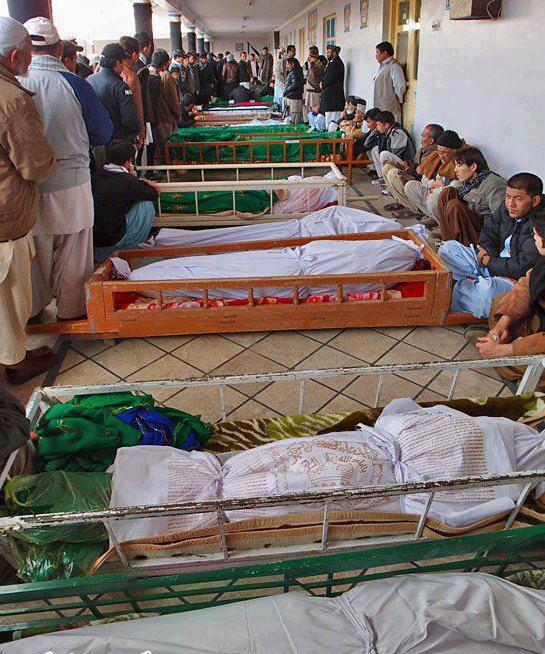 On January 10th the besieged Hazara Shia community in Quetta suffered their worst day yet when two bombs (probably a suicide bomber followed by a remote controlled car bomb) killed scores of people on Alamdar road (the death toll is now over 100 and still rising). The Hazaras are Shia and originally from central Afghanistan, but they have been in Quetta for over a century. Two periods of persecution and unrest in Afghanistan saw especially large migrations. The first in the 1890s when Emir Abul Rahman carried out a policy of persecution for several years (this is around the same time the Kafirs of Kafiristan were wiped out in Afghanistan and their homeland renamed “Nuristan” or the land of Light, the light in this case being the light of Islam). The second from the 1970s to 1990s, when persecution and civil wars in Afghanistan caused heavier migration.

As a community, the Hazaras have been patriotic and more attached to the Pakistani state than either the Baloch or the Pakhtoons of Balochistan. But the state has not repaid this loyalty too well. Jihadist priorities led to the promotion of Salafist/Deobandi madrassas and clerics in the entire country and they in turn added anti-shia polemics to the Jihadist mix. Torn between the need to promote strategic depth and to crack down on anti-shia terrorists like the Lashkar e Jhangvi (LEJ), the state opted for strategic depth again and again. The worst anti-shia terrorism was never approved by the state in the way other varieties of Islamism and Jihadism were promoted (the ISI supposedly begged the Afghan Taliban to hand over LEJ terrorists to them, but were rebuffed), but it was never effectively countered because the same madressas,clerics and patrons (i.e. Saudi Arabia and Gulf millionaires) were connected to both tendencies and the preservation of good jihadis prevented the extermination of the bad ones.

By now, matters have become worse. 30 years of madressa indoctrination, political organization and militant networking (including extensive criminal networks that carry out kidnappings, extortion and armed robberies) have created a real mass base that local politicians do not wish to annoy, and an armed milita that is capable of intimidating police, judges and even the army.

Due to their exposed position (only 500,000 or so people, not a powerful community, weak local roots, weak home country, relatively weak diaspora) the Hazaras of Balochistan have become a favorite target of the Takfiri terrorists (LEJ). Easily identified by their looks (they have somewhat Mongolian features) and lacking powerful patrons, they have been slaughtered in indiscriminate attacks for years. The total number of hazaras killed is now approaching 1100. For years the killings provoked no serious response from the rest of Pakistan, but the latest masacre has shaken the country. The Hazara community finally lost patience and started a sit-in with the coffins of the victims. This vigil, conducted in freezing rain, with the actual dead bodies of the martyrs lying in the midst of the crowd, awakened the conscience of many in Pakistan and spontaneous demonstrations of support broke out all over the country (and abroad).

In a performance that has become all too expected, the PPP government failed to respond to this outrage in any adequate manner. It took three days for the Prime minister to finally make it to Quetta to talk to the protesters. Bilawal Bhutto and his dad remain holed up in Bilawal house in Karachi, unable to take the initiative. They have now fired the inept so-called chief minister (so-called for he controlled little or nothing in Balochistan and his sorry presence did nothing more than provide civilian cover to the failures of the army and its agencies that actually made all decisions in the province) and imposed governor’s rule. There is no sign of serious action against the terrorist networks (which operate quite openly in the province). There is even less sign of a broader anti-Jihadist plan that will be essential if the long term trends are to be reversed.

In the absence of smart politics from the PPP the protesters in other cities (mostly mobilized via social networking, so mostly middle class) are being directed towards anti-Zardari feeling more than anti-LEJ  feeling. Middle class lowest common denominators like  ”get rid of 300 corrupt politicians and all will be well” and “establish a government of patriots and honest people to clean up the mess” are being inserted into and around the protests, preparing the ground for another intervention by the very forces that created the LEJ and its support network. Not a good 3 days for the PPP regime (even by their own low standards).

Some friends think that the army (and the blessed US embassy) may actually be thinking of taking real action against the LEJ and just feel that such action will be easier with an “efficient technocratic regime” without messy politics and incompetent politicians holding them up. But just look at their performance to date. The farcical Tahir ul Qadri parachute drop from Canada. MQM to be cleaned and brought in but not PPP? PMLN to be dumped but PTI loaded with lotas to be taken on board? These are not the actions of the second coming of Bismarck.. The fresh start may prove to be more of the same.

btw, for those how think the SSP and LEJ’s shia hatred is either recent (“drones did it”) or limited, please watch.

Jump to the 6 minute mark for some interesting comments about Benazir. Who knows what she actually said to him,  but one can certainly see what HE thinks she should have said to him.

His son is named Moavia, here he is: