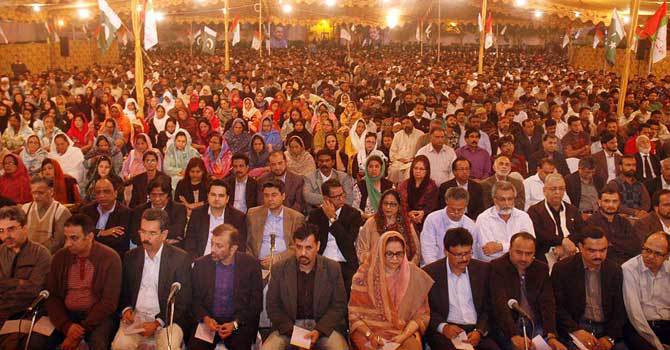 The misfortune of Pakistan continues even in 2013. History will remember 10th January 2013 as another “Black Day” of Pakistan. . A series of blasts in Quetta did not only jolt the whole country, but the Political drone attack from Altaf Hussain (Leader of MQM) too, targeted Mr Jinnah and native Sindhis has started endless arguments. In fact, the writer too intended to write on other issue, but could not resist being part of this discussion where drone has launched from London and assaulted the grave of Quaid in Karachi.

Altaf Hussain, who always played a dominant role in the power politics of Pakistan since last twenty-six years, nevertheless, never participated directly in any elections, is an example of a quote that ‘anyone who says that they are not interested in Politics, is like a drowning man who insists is not interested in water.’

The conspiracy, albeit started with the return of Tahir-ul-Qadri after his self-exile, and it had a twist when Altaf Husain announced to be part of his long march. Although Mr Hussain repeatedly said, that his party would remain part of the government, nonetheless, it is out of question, that how an ally can create a situation, which establishes an impression to sabotage democracy. A few weeks ago when Supreme Court issued him a notice for the contempt, he announced for a political drone attack. However, the day he submitted ‘unconditional’ apology, he named his drone attack as “friendly” drone. Nation thought, that he would either announce for his return to Pakistan, or will convince Dr Qadri to step back due to the betterment of the country.

However, his 10th January 2013’s two hours ten minutes long speech created a new controversy about Quaid-e-Azam Mohammad Ali Jinnah, in which he BLAMED that Mr Jinnah took oath to remain faith full to his majesty King George The Sixth as first Governor general of Pakistan.

He further said that Mr Jinnah was a “BRITISH NATIONAL” due to holding a British passport. He nevertheless, defended his and his new political ally Dr Qadri’s dual nationalities by bizarre arguments but seriously offended the whole nation by this serious assault on the integrity of Jinnah.

The most agonizing thing was to notice a stupendous and LITERATE crowd of MQMs other leaders and think tanks endorsing him in an absolute gullible way. Nobody dared to interrupt him and correct the history, that when Mr Jinnah issued a passport, at that time, there was no “Pakistan “on

the World map, while India was colony of great British Empire. Irony, that the copy of the passport, he presented to the media says on Page 1B “British Subject by Birth”.

Moreover, it is even described in grade three’s social studies books that King George IV appointed Quaid-e-Azam as Governor General as Quaid refused to accept Lord Mountbatten as Governor General for Pakistan even for a single day. Lord Mountbatten, however, became the first Governor General of India on 15th August 1947 under The Indian Independence Act 1947 (10 & 11 Geo 6 c.30) as an Act of the Parliament of the United Kingdom that portioned BRITISH INDIA into the two new independent DOMINIONS as India and Pakistan.

India, fortunately, made its constitution within two years and became a republic while Pakistan remained in political turmoil for further more years. However, the issue settled conclusively in the days of Pakistan’s first Prime Minister Liaquat Ali Khan, martyred in 1951. On May 18, 1948 he said that “ A man can be loyal only to one country, a man owe allegiance only to one state and anyone who tries to pose that he owes allegiance to more than one state is either deceiving himself or thinks that he can deceive others. And, therefore, Sir, to my mind, this is a very important condition that anyone who is to be a Member of this Constituent Assembly must owe allegiance to PAKISTAN and PAKISTAN alone.”

Altaf Hussain further taunted the nation that there was first king George IV and then Queen Elizabeth “The Emperors” of Pakistan until 1956.

Alas, nobody again corrected him that Pakistan had a dominion status and there was no constitution for many years. On March 23rd 1956, Pakistan became a Republic, however, only after two years; Ayub Khan took over the control, announced the Martial Law, abolished the constitution, and linked 23rd March to the 1940 resolution because he did not want Iskander Mirza to be remembered as the first president of Pakistan.

He also targeted Sindh government and threatened for the division of the Sindh. In fact, the major allegation faced by MQM, since its formation, is to work on the agenda on the division of Sindh. That is, indeed, the main reason that the party never found place in main stream politics, and only limited to a specific community or areas. This is fact that MQM never won any seat in other provinces of Pakistan apart from a massive campaign to become to the national party. In addition, party also confronted grave allegations of target killing, riots, and ‘Jinnah Pur’ controversies, and then encountered a military operation in 1992 that caused self-exile of Altaf Hussain.

No matter in which context, but the statement or threat has also awakened past year’s controversy and the desperate campaign of Muhajir Province to divide Sindh. The controversy took many lives in Karachi riots and target killings, still the daily death toll of target killing is never less than double figures.

MQM though always denied for any involvement in that conspiracy but Liyari Aman Committee’s chairperson Habib Jan has released a shocking confession video of Saulat Mirza, from jail, as counter drone attack. Soulat Mirza, sentenced to death, is still not convicted. It would be also in

memory of people that how PPP’s former home minister Dr Zulfiqar Mirza seriously alleged Governor Sindh and the federal Interior Minister for the delay of his conviction.

In that video, he speaks in despair for having no hope by the party intervention to save his life. His terrifying and unbelievable confession, nonetheless, is on the description of facts that how party gave orders to him to kill people and to create such situation, which compels army to intervene and then the movement from MQM to United Nations for separation of Karachi and adjoining cities from Pakistan.

Now, the main question provokes any intellectual or sane person’s mind that why all incidents are happening together. At one side, When Pak Army considered ‘Internal Security’ as biggest threat in The Green Book of 2012-13; India killed two Pakistani soldiers by undue and unjust firing on Line of control at Kashmir. At same time, Dr Tahir-ul-Qadri, A Dual National, with no electoral representation, is provoking for long march to change the system and Altaf Hussain (who is famous to jump out of the sinking ships) is strenuously determined to join him in capital where his party has zero representation. Furthermore, what is the guarantee that the situation from 14th January will be calm and under control when an active wave of bomb blasts has petrified the nation? Another question that when government has only two months left then why Altaf Hussein and Dr Qadri are extremely desperate to pursue with this high risk activity. Why they cannot wait for the elections, what is that urgent that they are going to create a behemothic risk for the safety and sovereignty of the country? Dr Qadri who is no doubt an effective religious clerk, why reluctant to guide the ignorant who are continuously killing Shias, soldiers, politicians and innocent citizens including women and girls. Why his emphasis is only to change the constitution by unconstitutional way? At last the main question that on whose agenda he actually is working on. From where did he bring massive funds to run this campaign with such Politics that is nothing but a gentle art of getting votes from the poor and campaign funds from the rich by promising to protect each from the other?

Finally, has the big game really begun, shown on some maps in early 2000s? Is this all happenings are a planned script, which is repeatedly warned by friends of Pakistan? If such conspiracy is set then why our leaders are acting according to that script and why no agency disclosing that evil plan?