Apologists and affiliates of Deobandi militants of Sipah Sahaba Taliban (SST) and also those pseudo-liberals (Najam Sethi and his fan club in particular) who see no shame in promoting Deobandi thugs such as Tahir Ashrafi and Ahmed Ludhianvi as prophets of peace are currently busy in criticizing Dr. Tahir-ul-Qadri. While one may disagree with some of the political views or rhetoric of Dr. Qadri, criticism levelled against him due to sectarian (Deobandi-Salafist) motivation or based on malicious propaganda is both unfair and distasteful.

In recent weeks, someone from the anti-Qadri lobby engineered a video to show that Dr. Qadri’s position on the blasphemy law is far from clear. Some haters went to the extent of equating Dr. Tahir ul Qadri with Mumtaz Qadri, the notorious killer of late Governor Salmaan Taseer. Some of them went to the extent of ridiculing the sacred word Qadri which is an affiliation of millions of Sunni Sufi (Barelvi) followers of Hazrat Abdul Qadir Jilani in Pakistan, India, Iraq and the rest of the world.

In this post, we present a couple of videos in which Dr. Qadri explains his position on the blasphemy law. We hope this will be sufficient to shut mouths of SST propagandists. While we agree with Shaheed Taseer’s position on the blasphemy law, i.e., the law should be amended to stop abuse against religious minority groups, and while we may not completely agree with Dr. Qadri’s views on this topic, it is equally important that his views should not be twisted and misrepresented.

The following text and explanation is taken from Dr. Qadri’s facebook page: 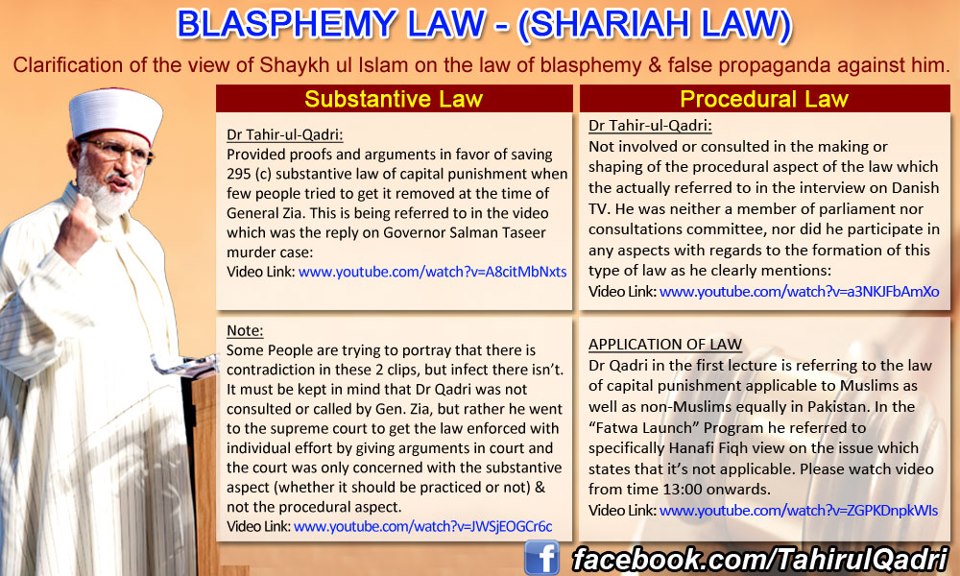 I have seen original “full” clips and therefore know how this cut-and-paste has totally tempered with the meaning. As per my knowledge this tempering was originally done by Takfiris and now other people are spreading it without even knowing the agenda behind this tempering.

I have listened to this video clip completely and can say with full confidence that neither there is any contradiction in what he is saying, nor has he lied anywhere in it. Here is an explanation of how:

1. Is the punishment applicable on non-Muslims or not?

In the beginning Dr Sahib is saying that blasphemy is not applicable on non-Muslims. This is a part of a scholarly briefing in which he presented view points of different Islamic schools. In this part of the briefing he was presenting the view of Hanafi School as he presented other’s views also during the talk. In the other clip he is stating his own opinion and judgment about the matter in which he is saying that this punishment is applicable to non-Muslims also.

2. Every law has two components:

(i) Substantive Law: It explains what is the crime and what should be its punishment. He proved in court that blasphemy is a crime and its punishment is death. He also clearly stated the same it in his interview with the Danish TV Channel but the makers of this cut-and-paste video have deliberately hidden that portion.

(ii) Procedural Law: It explains the procedure to implement it e.g. at which level it can be reported, how many witnesses will be needed, who can take action against it etc. Dr Sahib has difference on this part from the very beginning (since the time of Zia ul Haq) as in its current shape it can easily be misused (and in fact has been misused many times). When he said in interview that he differs on this law he talked about Procedural Law and clearly said it in the interview. But again this has been deliberately removed from the tempered video clip.

3. About the Zia ul Haq reign:

Besides Zia ul Haq’s repeated requests, Dr Sahib didn’t join his cabinet. But when there was a case in the court about what is the punishment of blasphemy in Islam, and scholars were not able to prove anything convincingly, he gave arguments with a 14 hours talk and proved that in Judaism, Christianity and Islam the punishment of blasphemy is death. When court was about to announce its decision, Zia suddenly made this law for some political point scoring. But as per the Procedural Law, it needed many improvements. In other words, Dr Sahib fought the case of blasphemy law in Zia’s reign, but he wasn’t a part of his government.

Why the Denmark visit was a Miracle ? http://www.minhaj.org/english/tid/18456

If you wish to sincerely know the reality of the position held by Shaykh ul Islam Dr Tahir-ul-Qadri, then please watch his entire lectures on this topic:

If you can’t be bothered, this video puts the clips in proper order and context: