Home  »  Newspaper Articles   »   A story of the ‘others’: Hazara Shias lose all hope in Pakistan -by Farahnaz Zahidi 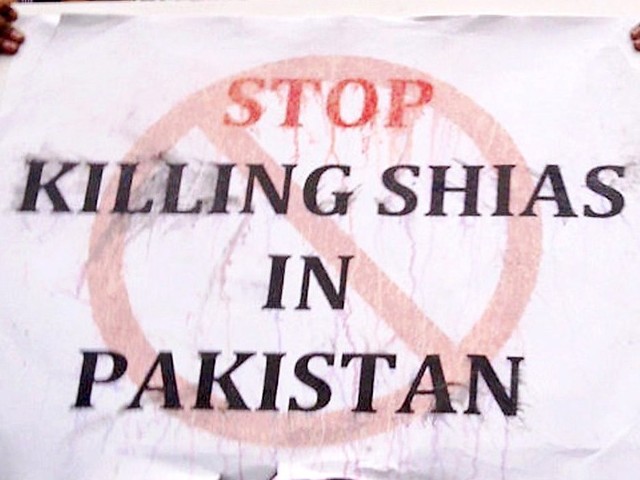 Context: More than 20,300 Shia Muslims have been killed in Pakistan by Deobandi militants belonging to Sipah Sahaba Taliban (SST). At least 700 of these slain Shias are Shia Hazaras and 300 are non-Hazara Shias of Quetta. Pakistan army sponsored Jihadist Deobandi militants are killing Shias of all ethnic backgrounds in all parts of Pakistan, however, identifying a Shia Hazara is relatively easy because of their unique Mongolian features.

KARACHI: Shabana Khan* speaks from behind a screen put up to protect her identity at a recent women’s assembly. I cannot see her. I do not know what her age is. I have no way of observing her non-verbal communication. But what I do know is that this is a person in pain. Intense pain has resulted in eloquence as well as a defiant, almost rebellious fearlessness. She is a young woman from the Shia Hazara community and lives in Quetta. This is an excerpt of the story she tells of herself and her community:

“Death is waiting around the corner. Before that, I must share what it means to be a Shia Hazara. Today, I am going to share a bit of my story – the story of me and my people. When one of us comes in front of you, you mostly label us Chinese or Korean. Our complexions are not like yours, neither is our race or genetic composition. We are the ‘others’. And our pain is that of the others. We are Pakistanis but not considered a part of you. Very few will raise their voice for us, even when 27 of us are taken off a bus and are shot and killed just because we are Shias. Just because we have Mongol-like features. Just because we migrated here from Afghanistan.

What is our crime, I still don’t understand. We pay taxes. We make useful things out of spare parts. We want to be peaceful contributors towards the progress of our country, Pakistan. We dream of a beautiful Pakistan where all sects and ethnicities work together towards a common goal.

But what is the reality? How many of you can relate to 5 dead bodies being taken out of a house – father, brothers, sons. What do the women of that house go through? What is the future of these women? Of the Shia Hazara women? When they step outside the four walls of their homes once the men have been slaughtered, to earn a living because they have no other choice, vultures start circling. These are men who have been directly or indirectly responsible for lifting the roof off their heads. Responsible for killing the men in their lives. They offer help to these women in exchange for not cash but kind. I am one of those women.

As a girl from the Shia Hazara community, I know my life is forever at risk which is why I am hidden behind a screen for my safety as I speak to you. But trust me when I say that if tomorrow I am killed, my death will not make newspaper news unless a mass massacre happens.  Most killings of my community don’t make it to national news.

Why do you take each other’s pictures? Mementos? We, the Hazaras, now photograph each other knowing that probably these photographs, especially of our men, will be placed on their dead bodies during their funeral. The area of the Ganj-e-Shuhada graveyard for the Hazara community is being extended. More dead than alive. And the rest a community of the living dead…constantly living in a state of fear.

We are marginalized. As a working woman, I have seen better days. There was a time when I could travel to 30 districts, safely, even at night and my parents didn’t worry. Now, I  cannot walk even a kilometer down from Meezan Chowk to buy something I need. A Shia Hazara girl today cannot go till the Sariyab Road, Quetta, to the Balochistan University, to get an education. Do you know what it is like to live in a constant state of fear? To be surrounded by people who are also equally afraid? When fear becomes a way of life. Even if the sound of thunder or lightning strikes, we think someone is here to attack us. If a bus is stopped by the police for checking and we are on board, we are sure that this is it – that death has arrived.

These days when Shia Hazara mothers hand over chadars to their daughters when they are stepping out, they advise them to kill themselves in case someone approaches them with wrong intentions. To save their lives, our brothers flee the country as part of a mass exodus, travelling by sea, and many become food for the fish on way. Many are kidnapped in that dangerous journey, and then their families are asked for ransom. If they are lucky enough to reach Australia, they will never be 1st grade citizens of that country.

I often wonder why the contributions of my community are not mentioned in history books. Our ancestors may be from Afghanistan, but we have made contributions for Pakistan. Even today, Hazaras are a silent force, working towards a better Pakistan, peacefully and sincerely. We are doctors and engineers. If nothing else, we are labourers and janitors. We build your homes and lift your trash. All we ask for in return is the right to be able to live a peaceful life in this country we call our own. Is that too much to ask?

My mother always used to say ‘pray for your brother. Allah listens to the prayers of a sister for her brother’. But now I sometimes think none of my prayers are being heard.

There used to be a time that my community was doing so well as traders and businessmen because of fair dealings. Hazara boys and girls got jobs easily because of their efficiency and integrity. Now, fear forces us to stay at home. Even going to the hospital for treatment is an ordeal. Our dead in hospital mortuaries are also not peacefully handed over to the families till their wives go and identify the bodies.  Even our children suffer. Look carefully at a Hazara child’s eyes.

We also have brave Malalas among us. But we are just not in the limelight.

People ask us where is your ghairat (honour)? Why doesn’t your community fight back?Whom do we fight against? Our ignorant Muslim brother who doesn’t even know why he is killing us? And we who are being killed don’t know our crime!

Political bigwigs have made statements saying ‘death is in Allah’s hands’. Why this fatalistic attitude only for the Hazaras? It is not so easy to accept the death of a little boy who dresses up for Eid namaz and goes but comes back home not alive but dead. Allah has every right to take our lives because He is our Creator. But murderers taking innocent lives, this is not by the will of Allah. This is tyranny. This is oppression.

In Muharram, our Sunni brothers used to set up sabeels for us when we mourned the martyrdom of Imam Hussain. Now, since 2002, we mourn ourselves and lift our own dead and bury them ourselves. We no longer prepare jahez or baree. Because it is cloth for shrouds that comes by the yards.

When hope is lost, all is lost. The Hazaras are reaching that point where we lose hope permanently. Save us before that day comes.”

*Name has been changed