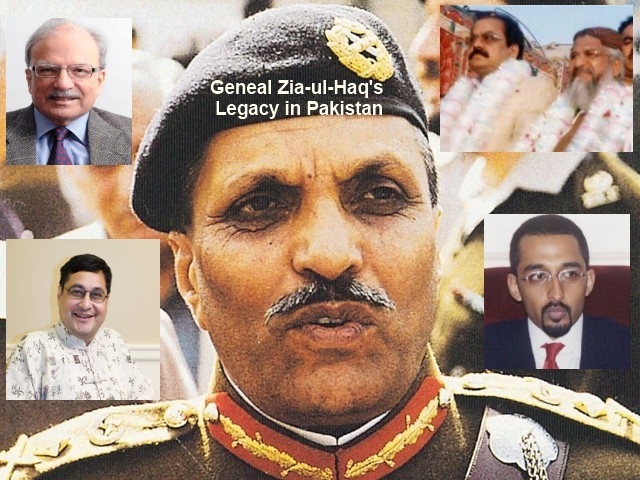 If it were not for The Economist and The New York Times, Shahid Javed Burki may never have noticed the on going massacre of Shias and other religious minorities in Pakistan.

[First and foremost this Sunni vs Shia sectarianism discourse is not only dishonest but also misleading. Same Takfiri Deobandi militants of Sipah Sahaba Taliban (SST) who are killing Shia Muslims are also killing Sunni Barelvi (Sufi) Muslims, moderate Deobandi and Ahle Hadith, Ahmadi and Christian communities. Thus, the current wave of violence in Pakistan should be described as Takfiri Deobandi vs the rest of Pakistan, not Sunni vs Shia.]

Writing earlier this week in the Express Tribune, Mr. Burki, a renowned economist and a former vice president of the World Bank, expressed concerns about Pakistan’s tarred reputation abroad. He warned that since the western media has taken up the cause of indiscriminate violence against Shias, especially the Hazaras in Balochistan, the negative press will make it increasingly difficult for Pakistan to either obtain concessions from the US government or to seek assistance from the World Bank or IMF. [It is a fact that out of 20,000 Shias killed in Pakistan so far, around 700 are Shia Hazaras of Quetta. At least, 300 non-Hazara Shias have been killed in Quetta which shows that anti-Shia violence in Quetta and other parts of Pakistan is motivated by faith (Shia sect), not ethnicity (Hazara etc).]

He further argued that such stories of violence against minorities paint a negative picture that could discourage American consumers from purchasing goods made in Pakistan. Thus, there is a need to tell the world not to be alarmed because “Pakistan is transiting towards a political order in which conflicts will get resolved through discourse and legislation.”

I am rather disappointed to see that Mr. Burki waited for over three decades to realise that the veterans of the Afghan war (a high-risk adventure he admired in the past) have been busy killing Shias and others in Pakistan. I am particularly offended by his statement that the “only reason why so many people are being killed is that they [the victims] profess a different faith than the one to which the killers subscribe.” Is this a subtle attempt to brand Shias as non-Muslims, because no one doubts that the sectarian killers do profess Islam and use it to justify murdering Shias, Ahmadis, and those Sunnis who respect Sufis, such as Daata Ganj Bakshand Laal Shahbaz Qalandar.

I have known Mr. Burki through his writings and believe that he is a closet admirer of late General Zia-ul Haq’s Islamisation (read radicalisation) and also a supporter of the Afghan war. I am more troubled by not what he has written per se, but what he has omitted. His past praise for General Zia’s social and economic agenda is devoid of any criticism of how Pakistan’s Armed Forces took control of the civilian institutions and public assets, legislated laws curbing the freedom of women and minorities, and held the constitution in abeyance. Mr. Burki does not seem perturbed by Pakistan’s excessive defence spending, which is a significant contributor to Pakistan’s poor record in human development. And most importantly, he fails to see and acknowledge the link between the extremist violence in Pakistan today and General Zia’s policies that forced Pakistan into a war with its neighbour and at the same time made Pakistan economically even more dependent on the US and the IMF.

High risk adventure that did not pay off

Mr. Burki is alarmed at the widespread violence in Karachi, Pakistan’s economic hub. He is shocked to see Karachi being Talibanised. I would argue that instead of expressing concerns, Mr. Burki should instead take credit for Karachi’s Talibanisation, which is a direct result of the high risk adventure, i.e., the participation in the Afghan war, that he thought had paid off for Pakistan.

Writing in the journal Asian Survey in 1988, Mr. Burki praised General Zia for pushing Pakistan into a proxy war with the Soviet Union at the behest of the US. He mentioned General Zia’s successful negotiation of $3 billion in charity from the Reagan administration in 1981. In return, Pakistan allowed the United States to open a pipeline “through which sophisticated arms, including Stringer missiles, began to flow to the Afghan mujahideen. It is estimated that the United States alone supplied over $2 billion worth of weaponry to the Afghan resistance groups that operated out of Peshawar. Many more billions worth of arms and ammunition came from China, Egypt, and Saudi Arabia. For Pakistan this was a high risk adventure but it paid off.”

The weapons brought in for the Afghan war are now being used to kill innocent civilians in Karachi and other urban centres in Pakistan by the very veterans of the Afghan war and their descendants. The Afghan war was the high risk adventure that today is causing Pakistan to implode under sectarian and communal violence. It should come as no surprise that all independent assessments of Pakistan’s role in the Afghan war see it as a great misadventure. “Pakistan’s Afghan policies over the past 30 years, whether pursued for domestic, political or strategic reasons or under US and international pressures, have come at the expense of the country’s political stability and social cohesion,” concluded Marvin G. Weinbaum & Jonathan B. Harder in the journalContemporary South Asia.

In several of his writings, including the one referenced here, Mr. Burki has reviewed General Zia in a positive light, and at the same time he has been very critical of Z A Bhutto. While Mr. Burki, like everyone else, is entitled to his own opinions, he is however, not entitled to his own facts. In his praise for General Zia’s overzealous religiosity, Mr. Burki paints a picture of widespread support for General Zia among the masses, which never existed.

““His [General Zia’s] family was also very religious, believing in the type of Islam in which man was to seek communion with God only with the help of the Koran and teachings of Prophet Mohammad. There was no need for intermediaries – no need for clerics, pirs, saints, or ancestors.”

General Zia used the Afghan war to spread his version of Islam (as described above) first in the tribal belt along the Pak-Afghan border and later to every nook and corner of Pakistan. The General facilitated the mushroom growth of Deobandi madrassahs that produced the very Taliban Mr. Burki complains of today. This dark episode in Pakistan’s history is very well documented. For instance, Professor Jamal Malik in his seminal text“Colonialisation of Islam: Dissolution of Traditional Institutions in Pakistan” presents a systematic review of how religious pedagogy and institutions were hijacked by the Zia regime to produce cannon fodder for the Afghan war.

Since General Zia was himself of the persuasion that did not appreciate the Sufi Orders (tariqa), he aligned himself with, and armed, those Pushtun tribes that shared his beliefs. This should explain why the Taliban have been busy bombing shrines of Sufi reformers in Pakistan. The 2010 bombing of Data Darbar that killed over three dozen unarmed worshipers or the attack on Malala Yousufzai are all manifestations of the extremist ideology originally propagated through madrassahs to radicalise the Pushtun youth to wage war against the Soviets in Afghanistan. Mr. Burki, on the other hand, believed that “Zia’s and Pakistan’s success in Afghanistan was great” that “made Zia the most respected leader in South Asia.”

Mr. Burki argued that General Zia enjoyed the support of the silent majority in Pakistan’s middle class, which he believed was the reason why the Movement for the Restoration of Democracy in 1981 failed to dislodge Zia. This is one heck of a revisionist take on history where Mr. Burki conveniently overlooked the fact that the military regime had imprisoned thousands of political workers including both late Benazir Bhutto and her mother. In addition, Mr. Burki failed to mention that the Chief Justice of the Supreme Court and eight other senior judges resigned in protest against the draconian laws General Zia promulgated to crush the movement against him.

Mr. Burki explained the motivation for the movement against Z A Bhutto as follows: The members of the middle class “regarded the PPP government as un-Islamic and anti-middle class, unmindful and disrespectful of the ‘ideology of Pakistan’.” If it sounds eerily similar to the Jamat-i-Islami propaganda, wait until you read more of what Mr. Burki wrote where he argued that Mr. Bhutto was hanged for what General Zia considered to be “crimes against the social values held so dear by the middle class – the shurafaa (the respectable citizens) of Pakistan.”

In his praise of General Zia and disdain for Mr. Bhutto, Mr. Burki even goes as far as rewriting the constitutional history of Pakistan when he credits General Zia for creating the vehicles for a constitutional transfer of power after his death. Mr. Burki wrote: “That the baton passed from Zia to his constitutional successor [after General Zia’s sudden death] was in part the result of the developments engineered by Zia-ul-Haq.”

Over the years, Mr. Burki has been signing praise of the economic success achieved during General Zia’s tenure, which Mr. Burki attributes to the fact that the General had given a free hand to his handpicked technocrats, i.e., Ghulam Ishaq Khan, Aftab Kazi, Vaseem Jaffery, and Mehboob-ul-Haq, to run the economy. “During Zia’s eleven years, the economy was able to sustain one of the healthiest GNP growth rates among countries of the Third World.” Mr. Burki credits general Zia’s civilian best man, Ishaq Khan, who “performed superbly” and re-established relations with “Pakistan’s traditional donors”, read IMF and USAID.

If one were to discount economic jugglery and the handouts by the US government, not much else is there to support the claims of a stellar economic performance. Note that Mr. Burki refers to an increase in the GNP growth rate, which unlike the GDP, accounts for earnings by Pakistanis settled abroad. This implies that as those who left Pakistan (because of poor economic and political prospects) earned more abroad, Pakistan’s GNP improved as a result. A more telling number is the growth in per capita income at 34 per cent (4.25% annually) during 1977 to 1985, which in fact was lower than the annual inflation rate, thus negating any real gains in earning potential.

And whereas, Z A Bhutto tried to reduce Pakistan’s dependence on traditional donors partly because of his “aggressive neutral foreign policy”, which Mr. Burki thought impacted relations with most donor agencies, the technocrats, however, were keen to put Pakistan back on the path of economic dependency with the IMF and the like.

One would have to consult a paper by Robert E. Looney in the Journal of Policy Modelling to get a clear picture of Pakistan’s economy under General Zia. Mr. Looney wrote:

At the same time, defense expenditures under Gen. Zia increased significantly from 5.4 per cent of GNP in 1980 to about 6.8 per cent in 1985. This is hardly an evidence of stellar economic performance, which Mr. Burki associates with the dedicated service of the civilian technocrats who served the military regime.

Mr. Burki writing in 1988 believed that by intervening in Afghanistan against the Soviets, Pakistan would be able to reap dividends of the high-risk adventure for a long time. He wrote: “It is unlikely that the Soviet withdrawal from Afghanistan will move Pakistan out of the niche it has carved for itself in world affairs, and the carving was done by Zia.”

Instead of reaping dividends, Pakistan is paying dearly for its misadventures in Afghanistan, first under General Zia and later under General Musharraf. If Pakistan were to implode completely under the religiously motivated violence, we should remember that this niche was carved by General Zia.