Chaudhry Fawad Hussain, colloquially referred to as Fawad Chaudhry, is often seen on national TV these days as a representative of the Pakistan 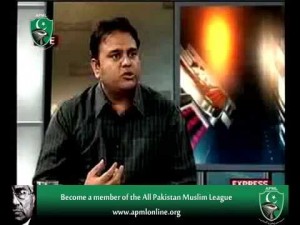 Peoples Party. It’s hard to believe that, a little over two years ago, Chaudhry was the media spokesman for former dictator Musharraf’s APML party. In those days, the affable lawyer from the Punjab was hardly even neutral towards the PPP. Take a look at this vintage anti-PPP statement of Chaudhry’s when the coalition government had called an All Parties Conference to assess the situation after the May 2 OBL raid and Admiral Mullen’s allegations of double dealing against the ISI. At a time when even Imran Khan, of all people, was professing the need for unity on a national cause, Chaudhry Fawad Hussain let loose at the government and its landmark initiative that sought to unite the country.

APML spokesman Fawad Chaudhry said the incumbent political leadership of the country was not capable of formulating a strategy on nation security. “The PPP-led coalition government gave nothing to the masses during the last three years except corruption, inflation and unemployment and the ruling alliance has neither vision nor strategy to steer the country out of crises.” He said the government had been befooling the masses in the name of joint sessions and APC, as the history saw that these forums proved only futile exercises.

And yet, today he draws an income and a social status, not to mention multiple media appearances, by being attached to that party and government that has “neither vision nor strategy”. Opportunism at its best, Sir! Join ’em if you can’t beat ’em, I say!

Fawad Chaudhry’s example of political opportunism isn’t the first, nor will it be the last. His display of political amnesia is not my motivation in posting his old statement. I would draw your attention, opinionated readers, to the criticism that this man spewed against the PPP and its coalition government. Criticism that was so not meaningful that he joined the very party he used it against! Next time you hear or read someone criticising the PPP, just realise how fickle that criticism is and how much our detractors really mean it. Like this case amply shows us, its all in jest! Really, do not take it to your hearts 😉