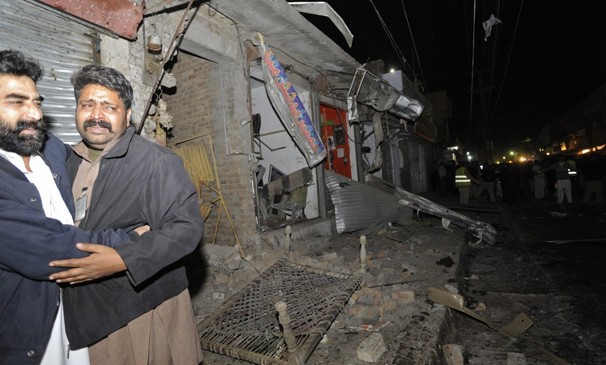 Shi’ite Muslims react at the site of a suicide bomb attack targeting a Shi’ite Muslim mourning procession in Rawalpindi, Pakistan on Nov. 21, 2012. Bombings at Shi’ite Muslims processions across two major cities of Pakistan killed at least 15 people and injured dozens. Security has been intensified across the country in the wake of Sunni Deobandi Muslims attack on minority Shiite Muslims, as Shiite Muslims are observing the holy month of Moharam. (EPA)

The last time I saw my uncle, Dr. Sibtain Dossa, we were sitting on a bench outside the mausoleum of Pakistan founder Muhammad Ali Jinnah.

It was May 1999 and my uncle was optimistic that the Sunni-Shia violence [in fact Deobndi militants attacks on Shias] plaguing Karachi wound end soon.

But he knew militants had two reasons to add his name to their kill list: he was the vice president of one of Karachi’s largest Shia mosques and he was a respected Shia physician with almost all Sunni patients.

“Do you think you can help my children settle in the U.S.?” he asked.

I scratched my head, still bald from Hajj a few weeks earlier. “And what about you Sibtain chacha?”

Most of my uncle’s Shia colleagues were killed but his belief in Pakistan never wavered. “No this is my country. I will not leave it. Did you know Jinnah was a Khoja Shia Ithna-Asheri like us?” he asked.

I laughed. I have heard every community in Pakistan claim the man known as “Quaid-i-Azam,” or great leader.

“No, nonsense,” Sibtain chacha said, beaming with pride. “He was one of us.”

I was a graduate student at UCLA when I heard the news. I was active with the school’s Muslim magazine and I often attended Muslim student meetings on campus. When I suggested to my Muslim friends that we host a lecture to understand Pakistan’s rising sectarian violence, none were receptive.

“Brother the issue is complicated,” one told me. “We will never solve this conflict,” another said. “Muslims face so much discrimination in America and we need to be united as Muslims and not talk about such things in public,” a friend said.

I was not surprised. Growing up in Sacramento, Calif., there were very few mosques and my family spent most of our time at a Sunni mosque downtown. When my brother and I prayed with our hands to the side (as opposed to folded on one’s midsection like Sunnis), kids would laugh. You are praying wrong, they told us. Fathers seldom corrected their sons. In fact many times men would come up to my brother and I in the middle of prayer, hit our arms, and show us the “correct” way to pray to Allah.

As a Muslim growing up in the mid-1980s in an all-white suburb, life was already tough enough being asked on the playground what I thought of Ayatollah Khomeini. I wanted to fit in somewhere and I found that space among Sunni Muslims.

But I learned as a young Shia boy that in far too many instances to be accepted by Sunnis means not talking about being Shia. And so I learned to censor myself. I did not talk about my family’s trip to Saudi Arabia in 1995 when guards harassed us in Mecca for being Shia. As an undergrad at UC Berkeley, I led prayers like a Sunni. When speakers made jabs at Shias on campus, I bit my tongue instead of speaking out.

As I grew older, I became tired of abdicating my Shia identity and I started drifting away from Sunni spaces. I remember attending a funeral for a Shia family friend when I was 19. Some of the Sunnis who showed up proceeded to lecture us on how our distinct Shia burial rituals were un-Islamic. One person even walked out when a Shia religious scholar started speaking. I was appalled. Couldn’t we have at least waited for the body to be below the Earth?

I tried to address these concerns with mainstream Muslim groups in the US. I even launched my own non-profit group to address the marginalization of Shia youth. In public, Muslim groups almost always gave their support but in private they told me they were not comfortable hosting events that explore intra-Muslim discrimination. Let’s just focus on being Muslims.

I retreated from the Muslim community even more and I often skipped Friday prayers because I was tired of returning from prayers enraged by yet another condescending sermon on how Shias don’t really get Islam right.

I became more assertive about my Shia identity and I grew curious to know more about my uncle’s assassination. In 2006, I finally returned to Karachi.

I was shocked by what I saw. When my cousin met me at the airport, he warned me not to store any names in my phone, lest a person abduct me and figure out my Shia identity by discovering names like typically Shia names Kazim or Mehdi in my address book.

Being a Shia in Karachi is to have spaces defined for you. To enter the Shia mosque near my family’s house, you had to pass through two checkpoints. First there was a pat down on the road leading to the mosque. Then you had to pass an armed guard tower and check-in your mobile phone with a watchman. Finally you had to pass through a metal detector. Women were not allowed to carry purses unless they were see-thru.

People I interviewed said my uncle was killed by the group Sipah-E-Sahaba (the warriors of the Prophet’s companions) because it was a way for them to demoralize Shias, to target the most respected and admired in the Shia community. I also learned that the court re-enacted my uncle’s killing at the scene of the crime. Several eye-witnesses identified the shooter but the judged repudiated each witness. Of the four gunmen, only one was arrested and he was later acquitted.

I continued to travel around Pakistan conducting interviews. That all came to a halt when in Lahore I was pulled over by the police, thrown onto the curb, and held at gunpoint. The officer said it was a mistake that he pulled me over because he thought I stole my rental car. When my cousins found out, they insisted it was a message: do not question why we are being killed.

I am not sure which version to believe. But my cousins’ explanation underscores the fear they felt and still feel today. And yet despite this, I was surprised to see my cousins still playing in the same cricket league with their Sunni friends. I figured the rising sectarian tension might sever Sunni Shia bonds.

One of my cousins insisted I had it all wrong.

“There is no Sunni Shia conflict,” he said. “Sunnis are good. But some Sunnis [Takfiri Deobandis] do not accept us and because of them, our life is hell.”