Following an organised intimidation campaign against the Shia in Pakistan initiated well before the Muharram began; as claimed, the Takfiri Deobandi terrorists of Sipah Sahaba (Ahl-e-Sunnat-wal-Jammat/ASWJ), Lashkar-e-Jhangvi and Tehrik Taliban Pakistan raised havoc in Pakistan. Not a single day passed in peace for the Shia. While the ‘concerned’ Ummah continued to cry over Gaza , the Shia were being butchered left, right and centre. Many in Pakistan, however, were more concerned about the disruption of mobile services and continued to blame the Shia, asking for their own death by going out on streets in huge numbers despite threats of violence. As it has become a routine now, defeaning silence prevailed as Shia continued to lift coffins and commemorate Ashura, the most important day on the calendar for them. 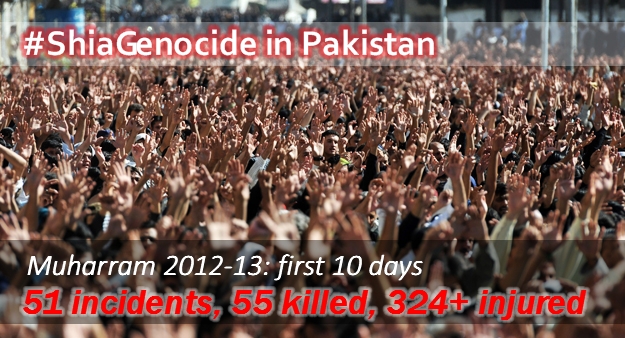 In the first 10 days of Muharram 2012-13, in a total of 51 incidents; 55 Shia were killed and more than 324 injured. There were several cases of terror plot thwarted which included suicide bombing plans, huge explosive devices and bombs planted – which could have resulted in hundreds of deaths.

Here is an overview of the anti-Shia violence in Pakistan (and outside) in the first 10 days of Muharram:

Takfiri Deobandis are enemies of humanity. They targeted Abdul Shah Ghazi shrine in Karachi as well which is frequently visited by Sunni and Shia alike. Police surrounded the place to find the bombs.

In the end, we will not remember the words of our enemies, but the silence of our friends. Please speak up. Break the ice.