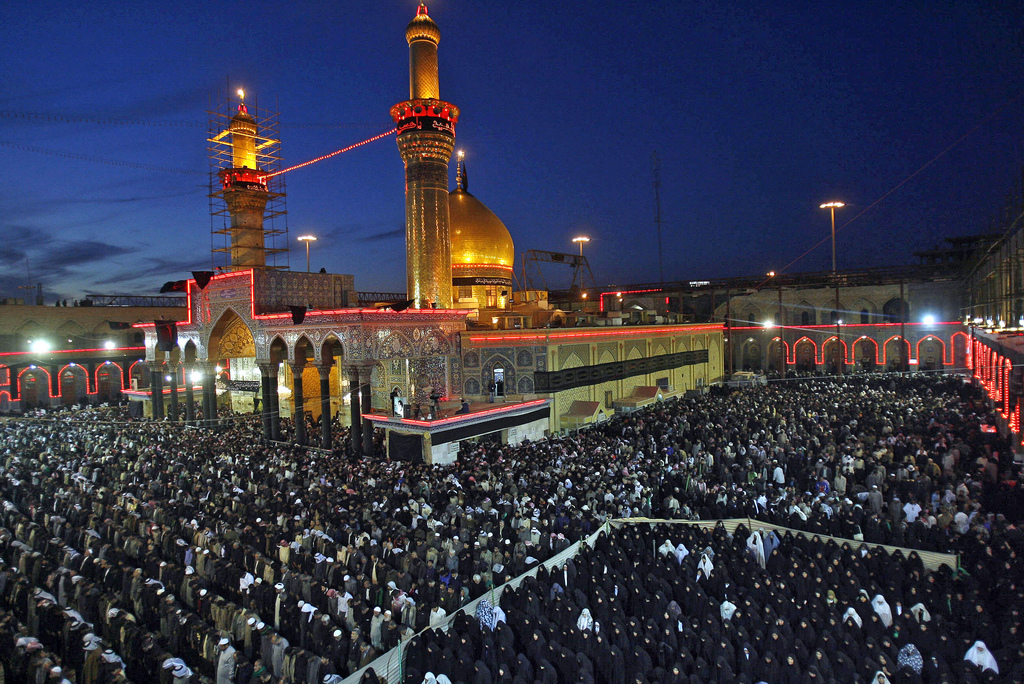 Imam Hussain was born in 620 AD to a family renowned for their values of love, equality and peace. He exemplified these morals – taught to him by his grandfather Muhammad [peace be upon him and his family], the last prophet of Islam.

Not long after the passing of Muhammad [pbuh&hf], the leadership of the vast Arab Empire had fallen into major disrepute and corruption. The morality that Muhammad [pbuh&hf] had spent his life instilling into society was slowly being eradicated as the new tyrannical ruler, Yazid, seized power.

Imam al’Hussain [a.s.] witnessed how the fundamental human rights of his fellow citizens was being usurped, and knew something had to be done. Yazid, from the Umayyad dynasty, son of Muawiya son of Abu Sufyan, knew nothing of morality or humanity, and ruled with an iron fist. He demanded Imam al’Hussain [a.s.] pay him an oath of allegiance, to lend credibility to his tyrannical rule.

It was now that Imam al’Hussain [a.s.] faced his dilemma… Should he give his oath of allegiance to an oppressive tyrant – stand aside and allow injustice to overcome morality? Or should he take a stand and risk great personal loss? The timeless words of his grandfather echoed in his heart and Imam al’Hussain [a.s.] knew what to do: The greatest stand is to speak the word of truth in the face of a tyrant.

WHAT HE LIVED FOR
Whilst Imam al’Hussain [a.s.] was determined not to bow down to a tyrant, he did not want to create social disharmony, conflict or any bloodshed. He decided to relocate with his whole family to the holy city of Mecca. Surely, he thought, Yazid and his henchmen would respect this city and avoid confrontation.

But Yazid’s threats of violence continued, and fears of bloodshed spurred Imam al’Hussain [a.s.] to move on. Imam al’Hussain [a.s.] was invited to Kufa – a town in modern-day Iraq – by his supporters and friends who lived there. They requested his help to spread the values of justice and equality they craved for so long. “They need me,” he said, “I have a duty that must be fulfilled.”

Setting out for Kufa with his family and close companions, Imam al’Hussain [a.s.] aimed to avoid conflict at all costs. His message was simple:

I will never give Yazid my hand like a man who has been humiliated, nor will I flee like a slave… I have not risen to spread evil or to show off – nor for spreading immorality or oppression. Rather, I have left to restore the teachings of my grandfather Muhammad…

And I only desire to spread good values and prevent evil…

That night, Imam al’Hussain [a.s.] assembled his companions and pleaded with them to leave him and save themselves. They refused to leave their leader, declaring that they would prefer to stay and die with him on the path of truth and justice. They took comfort in defending a noble cause.

The next day, under the blazing sun and searing heat, Yazid’s battle drums were sounded and orders were given to the army to attack and kill Imam al’Hussain [a.s.] at any cost. Imam al’Hussain’s [a.s.] army of approximately 100 men stood in front of an army of 30,000; the odds were impossible. One by one, Imam al’Hussain’s [a.s.] men, family and children sacrificed themselves to defend him, until he stood alone on the desert plains…

Wounded, fatigued and without support, Imam al’Hussain [a.s.] issued a rallying cry that shook the fabric of society; a cry that implored future generations and one which still echoes in the hearts of the oppressed and those seeking justice until today:

“Is there anybody to help us?”

Shortly afterwards, the heartless enemy army encircled Imam al’Hussain [a.s.] and he was ruthlessly killed and beheaded. It was the tenth day of the first month of the Islamic New Year, the 10th of Muharram 680 AD, Ashura day.

More than 15 million people visited the shrine of Imam Hussein in Karbala, Iraq during Arba’een on 14 January 2012.

Related post: Every land is Karbala: The globalization of Muharram – by Fahad Desmukh