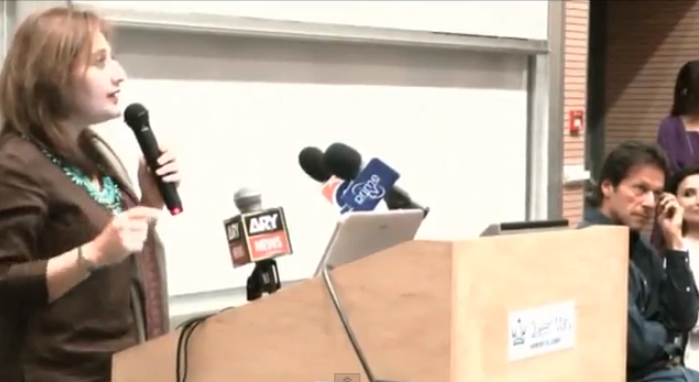 It is with great sorrow that I am resigning from Pakistan Tehreek e Insaf [PTI]. PTI is the first political party that I joined some 5 years ago with the belief that Chairman Imran Khan through PTI will change Pakistan by implementing the rule of law, meritocracy, accountability, transparency, democracy & justice.

I believed in PTI’s ideology and joined the party when there were only a handful of people associated with it in the UK. My conviction that PTI was the only party to change Pakistan gave me the strength to work day & night, build teams of volunteers, travel across the UK, raise funds by introducing the concept of paid membership for the first time in an international chapter, arrange fund raisers for PTI the party as well as projects such as Sasta Tandoor, document the code of conduct, setup PTI as a legal entity in the UK, setup a legal bank account, represent PTI in every forum in the UK, sponsor PTI offices in Pakistan, arrange varied public and official events for the Chairman. I was sure that PTI would bring the rule of law to Pakistan and I shared this message of hope with the common man and brought people into the fold of the party for justice. My team and I are proud to say that we made PTI a household name in the UK and saw it grow from a small group to a party of political activists.

Although we faced continuous challenges by one person within the party and braved the infighting (from Pakistan to the UK) including morally corrupt practices such as using Insaf website blogs to target PTI workers, ad hoc notifications posted undemocratically at the whim of Dr Alvi, disqualifications posted, illegal suspension notices posted, malicious social media used to target workers, email chain smear campaigns, UK website shut down as it started to make a lot of money for the party, creation of groupings within the party – we still raised hundreds of thousands of pounds for PTI’s activities in Pakistan. The multitude of tools used in the party to target workers meant that 80% of our energy was pointlessly wasted.

However I was still fresh with the success of the restoration of the independent Judiciary and felt that the Leader was unable to control some individuals in the party and it was not his fault & things would get better – so I beavered away.

The final straw for me has come after 5 years, and it’s a tough realisation when I believed with such intensity that PTI would change the corrupt to good & transform the destiny of Pakistan. But the lawlessness in the party is demoralising to the extent that I am now unconvinced that PTI can deliver what it has been promising.

PTI boycotted National Elections in Pakistan due to potential rigging & manipulation and lack of an independent election commission. For PTIUK elections, announced in Dec 2010 & held in Jan 2012, all rules & standards of holding Free & Fair elections were dropped. We boycotted these elections because they were openly rigged by Dr Alvi who had taken a personal dislike to us due to our continuous ‘ask’ for insaf, our escalation of wrongs within the party and pointing out breaches of PTI’s Constitution. For the UK, he used a divide & rule strategy, created & promoted groups & ensured that voting was through the Insaf website [email voting managed by him].

In order to ensure that his group had a chance of winning he & Dr Hamayun removed the UK body, dissolved the city structure & created regions and put in a ‘colonial structure’ to manage these regions from Pakistan. He introduced a list of 360+ bogus voters, which was again challenged by us. There was no election commission, no consultation of the election process and till today we have no visibility of alleged 400 voters who voted. We had boycotted as he did not allow eligible genuine members to vote because he knew that we had a clear win [we had made 100s of paid members between April 2011 and Jan 2012 hence we sent £119k in Mar 2012]. In addition to the above, he introduced another fraud region to facilitate his group win. Our pleas of violation of all fundamental principles of Free & Fair elections and violation of PTI’s Constitution fell on deaf ears – these elections were for a mere 863 people where majority were ineligible to vote.

Every CEC [Central Executive Committee] member and the Chairman were aware of the manipulation & rigging in PTIUK elections – some raised their voices but were rendered helpless as Dr Alvi was able to convince the Chairman otherwise. By this time, my faith in PTI was shattered however due to the immense support in the UK, I persisted and we forced a ‘Judicial’ review.

Further disappointed was in store – Dr Hamayun and Dr Alvi suspended me and 6 other senior die hard workers to silence and defame us as we had highlighted what they had done with PTI in the UK. This ‘illegal’ suspension & open maliciousness of its own party workers was also observed by the CEC & the Chairman and for 5 months nothing was done.

Looking back, we have wasted so much time on the pointless intrigues whereas we could have done so much more for Pakistan under PTI.

Despite all the wrongs we continued to deliver for PTI – I felt some comfort when Justice Shaiq Usmani was requested to review the PTIUK elections. He noted that the elections were rigged & manipulated and that our Suspension Notice was illegal. Still expecting Justice, I was relieved when the PSC (replacement of CEC) decided to implement the recommendations of Justice Usmani to correct the ‘fraudulent and bogus’ elections in the UK. Our suspension notice disappeared overnight without any accountability of those who had maligned us. In Aug 2012, the PSC announced a date of Nov 15 2012

I have decided to part ways with the party which cannot hold people accountable within, provide the rule of law and Justice to its own die hard ideological workers, constantly takes ’U turns’ and lacks democracy & collective decision making power – this has resulted in its inability to correct all wrongs.

I sincerely apologise to all the people who have asked me “not’ to resign and thank those from the bottom of my heart who have stood by me for justice as their support was my driver.

Today, I do not blame anyone however I do believe that at the end of the day whatever happens in a party is with the acknowledgement of its Leadership. For me PTI has lost its vision, its ideology and its direction and I hope that one day PTI can practice all that it preaches. It would be beneficial for all members if PTI leaders undertake a calm and rational analysis of what has happened to the party.

Rabia Zia nominated as candidate for PTI UK president (May 2009)