On October 14, Superintendent of Police Khurshid Khan and six security personnel were killed and several others injured when scores of militants attacked two check posts near Mattani police station. The militants beheaded Khan and took away his head (Source).

Entire Pakistani nation should pay tributes to Pakistani Police, in particular brave and honest police officers in Peshawar, Quett and other areas, who are sacrificing their lives to save innocent citizens from ISI-sponsored Takfiri Deobandi-Salafist terrorists (Taliban, ASWJ-LeJ etc).

In the last few years, hundreds of policemen and officers have sacrificed their lives in an effort to secure Peshawar, Quetta and Islamabad from LeJ-ASWJ-Taliban terrorists.

A few days ago, SP Peshawar Khurshid Khan along with two other colleagues was killed and beheaded by the Taliban. His great sacrifice was largely ignored by Punjabi and Urdu speaking TV anchors, columnists and bloggers based in Karachi, Lahore and Islamabad.

Several high-ranking officials performing duty in the areas have been killed in the last two years. Khurshid Khan, a DSP, was made the SP Rural to supervise the police action in the area after no senior officer was willing to take over the office.

PESHAWAR: Superintendent of Police (SP), Rural, Khurshid Khan, along with two cops and three soldiers of the Frontier Constabulary (FC), was killed in an attack on the Ghaziabad police post in Matani area in the wee hours of Monday. Eight cops and FC soldiers were also wounded in the attack carried out by over 200 militants late inthe night. The Tehrik-e-Taliban Pakistan (TTP) spokesman, Mohammad, called reporters in Kohat and Peshawar to claim responsibility for the attack and said Khurshid Khan was their target for heading operations against them while more officers were also on their hit list.

Militants torched the Ghaziabad police post and three police vehicles before they escaped. An official said SP Khurshid entered the post when it was believed the militants had escaped after setting the building on fire. The militants were, however, hiding inside and first hurled a hand grenade at the police party and then opened fire. They beheaded Khurshid and an FC soldier before heading towards the tribal areas, a source said.

The bodies of the slain cops were later transported to their respective hometowns for burial.Khurshid Khan is survived by a widow and three sons. Belonging to Tarnab village in Charsadda, he was recruited in the force as assistant sub-inspector in 1984. He headed many police stations of Peshawar during the last six years of service. (Source: The News)

PESHAWAR, Oct 18: The severed heads of a senior police officer and a soldier of Frontier Constabulary were found in Gulshanabad area of Matani on the suburbs of Peshawar early on Thursday, sources said.

The militants had slaughtered Superintendent of Police Khurshid Khan and another FC man identified as Mohammad Diyar on Sunday night during an attack on Ghaziabad police post in the limits of Matani police station.

A police source said that both the heads, packed in a bag, were hanging at the veranda of a market. The residents of the area informed police about the presence of severed heads of law enforcers. Police took them into custody and after postmortem handed them over to heirs for burial, he added.

He said that movement of police and security forces was increased in Matani, Darwazgai and adjacent areas to improve law and order situation on the outskirts of the provincial metropolis.

A villager, pleading anonymity, told Dawn that the attack on Ghaziabad post, manned jointly by police and FC, had caused panic among the people and they were feeling insecure.

“We are unable to express our feelings in public as nobody knows about the informers of militants and police. The best option for people like us is to remain silent or avoid sitting in the bazaars,” he said.

The villager said that in the past shopkeepers used to keep their shops open even after evening but the attack prompted them to pull down the shutters before the sunset to avoid any untoward incident.

Referring to the increasing activities of militants, he said that security forces should support police at the entry points otherwise law enforcers would not be able to control the situation.

DSP Fazl Wahid Khan, however, said that the heads were found in an open area outside Matani Bazaar. “We are making efforts to arrest all those involved in the heinous crime but so far no one has been arrested in this connection,” he said.

About the operation cleanup against militants in the suburban localities, the DSP said that it was essential but timeframe could not be given as it depended on the high ups of the department.

It is to be mentioned here that the post of SP Rural has been vacant since the tragic incident and the duty has been assigned to a DSP. Similarly, the post of Peshawar SSP is also vacant as SSP Tahir Ayub has gone on leave in connection with a professional course and the additional charge has been assigned to SP City Asif Iqbal. Efforts were made to contact the acting SSP but he could not be approached by the telephone. (Source: Dawn) 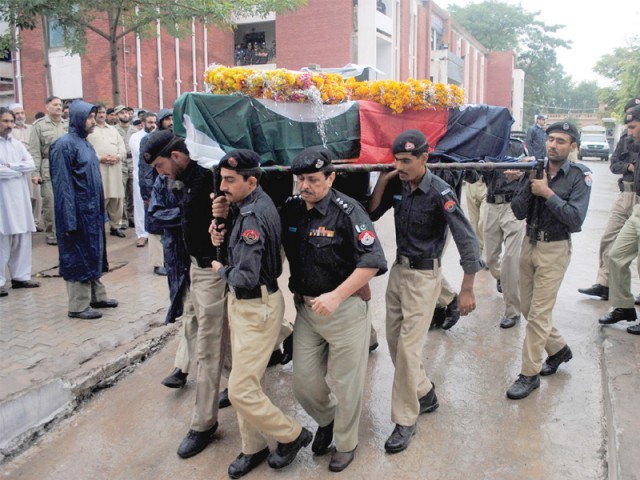 Bodies of the deceased officers are carried to the funeral in Peshawar. PHOTO: PPI

PESHAWAR: Becoming the second superintendent (SP) to be killed by militants in rural Peshawar, SP Khurshid Khan was laid to rest in his ancestral town Dagai in Charsadda on Monday.

Khurshid had taken the post of SP two months ago after the transfer of SP Shafiullah who was serving in the area to Mardan. SP Khurshid served in three positions as deputy superintendent of police (DSP) of the areas of Badabher and Mattani before his promotion to SP. In this short time as SP Khurshid had adapted to militant tactics successfully.
Khurshid, originally from the Mukaram Khan village in Dagai, Charsadda, joined the police force in 1984 as an assistant sub-inspector. In 1994, he was promoted to sub-inspector and later in 2009 as DSP. “He served as DSP in one of the most difficult circles in the entire district where clashes with militants took place almost daily and his team along with SP Kalam Khan was exemplary,” said Ijaz Khan, a police constable who served under Khurshid.

Ijaz said that Khurshid’s predecessor, Kalam, previously served in Swat and was accustomed to fighting irregular tactics militants used. “Kalam had complete knowledge of this while other policemen had no such experience,” he said. “So while serving under him, as DSP Khurshid adopted his methods quickly and motivated his men the same way too.” SP Khurshid was one of the few SP’s to acknowledge that this war needed to be fought with the limited resources available.

The increasing number of remote-controlled bomb attacks in the district compelled police to install radio frequency (RF) jammers in all police vehicles. Despite this, his vehicle was targeted on Frontier Road. Khurshid had brushed off journalists when they questioned him why some jammers installed in police vehicles were not working. He insisted at the time that he had deliberately deactivated the ones on his vehicle. However, officials at the Mattani and Badabher police stations disputed Khurshid’s assertion and said the jammers were malfunctioning and were not working properly.
Funeral prayers Khurshid and the other six police officers and Frontier Constabulary (FC) personnel that were killed in the attack was held Monday that was also attended by Khyber-Pakhtunkhwa Chief Minister Amir Haider Khan Hoti and Senior Minister Bashir Bilour. (Source: Express Tribune)