While MQM is the only party other than ANP and PPP that has taken an unequivocal, bold and clear stand against Taliban and religious fanatics without any ifs and buts, Altaf Hussain’s bold ultimatum to pro-Taliban clerics and his strategy to collect data of all such clerics must be appreciated. His call for identification of the Ulema and Khatibs who spread hatred against other sects and make inflammatory speeches is a step in the right direction.

Altaf Hussain lashed out at those Ulema (most of them Takfiri Deobandi-Salafist mullahs) who have not yet condemned the attack on Malala Yousufzai. He said a list of such so-called Ulema should be prepared and all of them should be prosecuted. He said people should not say prayers behind such Ulema. Altaf said that only mere lip service for the victims of Taliban-LeJ’s terrorism would be of no use, so Ulema should come forward to fight against the extremists and terrorists. He said that he would expose the real faces of those who have been misguiding the innocent people. Altaf Hussain appealed to the masses not to offer prayers behind the religious leaders who abstained from condemning the shameful act. He called on people belonging to different sects to offer prayers in those mosques where Ulema had condemned the brutal attack.

The MQM chief also reiterated his appeal to scholars belonging to all schools of thought to denounce the attack on Yousufzai and Shazia and Kainat, the two other girls also injured along with her. “The scholars should offer special prayers for the well-being and health of Malala and the others who were injured in the attack.” 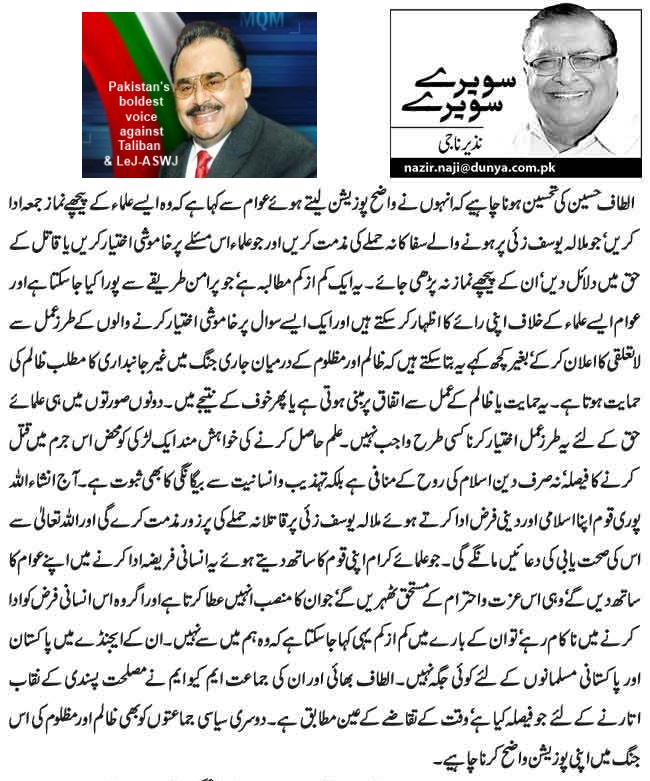 Condemn attack on Malala or be exposed

Muttahida Quami Movement (MQM) chief Altaf Hussain called upon the religious scholars of Pakistan to condemn the cowardly attack on Malala Yousafzai by the Taliban. Addressing religious scholars, the MQM chief said that he would be left with no other option, but to “expose” the scholars in his address to party workers if they did not openly denounce the dastardly attack within 24 hours.

He warned that the MQM would introduce a bill in the National Assembly which would only allow truthful scholars to impart religious education.

Muttahida Qaumi Movement (MQM) Quaid Altaf Hussain has appealed to the people of all thoughts to shun those ulema and khatibs, who during their Friday sermon don’t condemn the heinous attack on Malala Yusufzai and move to the other mosques where ulemas and khatibs flay this barbaric attack of terrorists.

The MQM handout further said that Altaf Hussain has appealed to the ulemas and khatibs of all thoughts to condemn the terrorism of Taliban, who attacked Malala Yusufzai and other little girls and at the same time, pray for the early recovery of Malala and other injured children. He also paid tributes to all those Ulemas and Muftis, who came out openly and issued fatwa against the terrorists, who in fact tarnishing the image of Islam by their such inhuman acts.

“Don’t pray behind clerics who do not condemn ‘Malala attack’,” says Altaf

KARACHI: Muttahida Qaumi Movement (MQM) Chief Altaf Hussain appealed to the people of Pakistan belonging to different schools of thoughts to refrain from offering prayers behind the ulema who do not condemn the attack upon daughter of the nation Malala Yousufzai by the Taliban terrorists. He advised them to offer prayers in the mosques where the ulema were condemning the brutal attack, said a statement issued by the MQM here on Friday.

Altaf Hussain praised the ulema belonging to Muttahida Bainul Muslimeen Forum and other ulema for showing courage in condemning the incident. He asked them to get united for saving the country.

Earlier today, the MQM chief  urged all office bearers, party workers and peace loving citizens of Karachi and the country to submit within a week the details of all muftis and ulemas (clerics) in their localities, regardless of their sectarian affiliations, with the party’s unit and sector offices situated in their respective areas.

Earlier on Thursday, Hussain gave 24 hours ultimatum to all top muftis and ulema (clerics) of the country to openly denounce the cowardly attack on young Pakistani children’s rights activist Malala Yousafzai or else he will ‘expose’ them.

MQM to register all ulemas and Muftis, says Altaf

Muttahida Qaumi Movement (MQM) Chief Altaf Hussain on directed all office bearers, party workers and peace loving citizens of Karachi to submit details of all muftis and Ulemas (clerics) in their localities, regardless of their sectarian affiliations, with the party’s unit and sector offices situated in their respective areas.

The MQM chief said that the particulars of all religious leaders holding different titles such as muftis, imams, ulemas and khatib should be collected from the units and sectors offices and should be dispatched to MQM headquarter Nine Zero. He also instructed all sector and unit office bearers to note down the names and addresses of all those who refuse to share their particulars so that the list of their names could be sent to the government for appropriate actions.

Altaf Hussain on Thursday gave all Islamic clerics based in Karachi an ultimatum to openly denounce the cowardly attack on young Pakistani children’s rights activist Malala Yousufzai and vowed take to task all those who fail to condemn the attack by banned Tehrik-i-Taliban Pakistan. 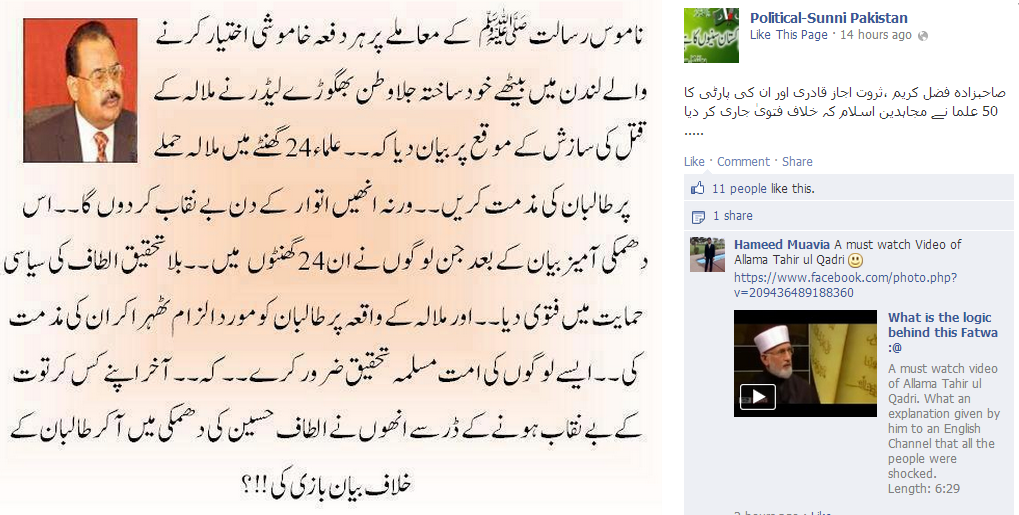 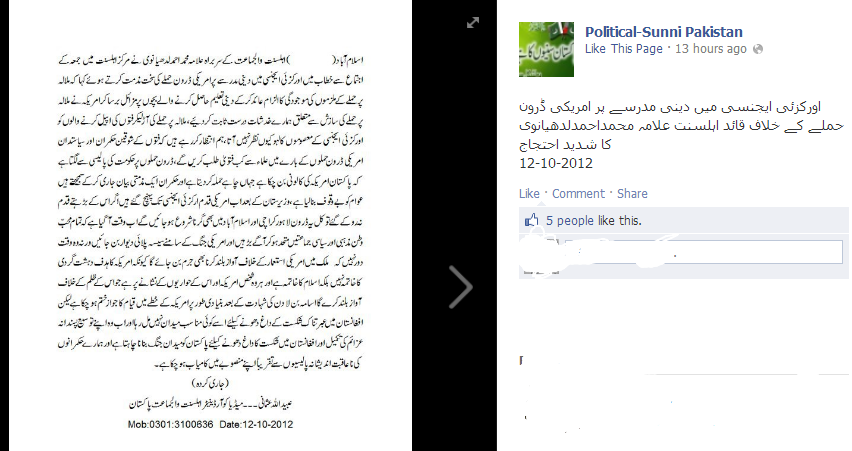 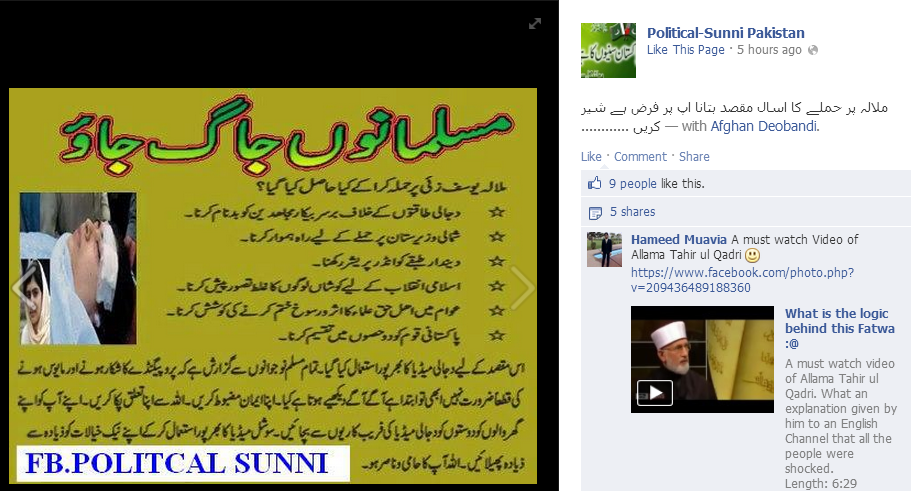