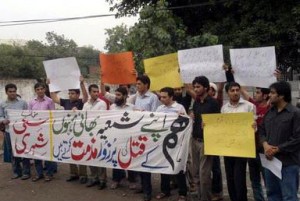 Despite what the foolish ones say, We Shia are your religious kin.
We are your brothers and sisters, and we are not some evil twin
Bent on destroying the fabric of God’s great deen.
But you should know that some folks are stupid and just plain mean.
They have to accentuate the differences in order to feel superior.

Their ranting is an ego trip
That causes folks to lose focus, and skip over that log-sized chip

They’re toting around.
They are passionate, and violent because their logic’s unsound.
Their scholarship is prejudiced, and they’re too tightly wound.

Yet some of you follow them without scrutiny. Are you blind?
It is a Muslim’s duty to be curious, study, analyse, and then find
The Path that is the most balanced.

The path exemplified by the Mercy To the Universe.
But you hear these people…voice toned to terse…
Cursing your living brothers and sisters for having a correct
view of history.
It should be no mystery
That these same people, who call us Kafir, walk hand in hand
With the enemies of God, Jabreel and man.

We Shi’i are your brothers and sisters…
And even though the forces of division blisters
Your Shia siblings reputation, with exaggeration, misinterpretation,
And bald faced, and neatly cropped, bearded lies,
Why do you set a prejudiced limitation on your sense of
Justice and reason, and allow yourself to despise
Us without even a fair hearing of our side of the story?
Will you just keep on keep on thinking everything’s cool
And “honkey-dorey” while they’re murdering us;
Spurred on by government sainted ancient Shaykhs who you blindly trust?

What is our capital crime? What crime have we committed?
We believe in Allah and To Him we’re submitted.
We believe that Muhammad, by Allah, was sent
With a Way and a Book that guides souls to repent
And bear witness. We pray five times a day;
Standing and bowing in the Prophet’s own way.

We believe in the Hajj, in alms, heaven and hell;
Angels and Demons that rose high and then fell.
We believe in the day when the trumpet will sound,
And the folks in the graves will rise up from the ground.
And those in the garden will ask those who fell,
“What brought you to burn in this inferno called hell.”
They will say, “We were not of those who rose for the Prayer.
“We fed not the poor. We were proud and unfair.
“We waded in vain disputes with those who waded in vain disputes,
“Like God was not there.
“And we denied Judgment Day. So we didn’t prepare
“Until the certainty came. Then we were aware.
“The intercession of no intercessor will help them then.”
We believe in all this. So what is our sin?

We believe in Jihad and commanding to right,
And forbidding the wrong, but we don’t worship might.

We do not believe that Quran’s incomplete.
This is certainly not some Taqiyyah deceit
As most of the foolish slanderously say.
We believe in Quran. In its laws we obey.
Yes we pray on a rock or a small piece of clay.
Is not the dust on the beard of a man a great sign
That his face and his hands on the Last Day will shine?

But the brokers of power turned clay floors to “gold”
Hand woven carpets, But us they still scold.
We don’t worship Ali. Nor Hasan, or Husayn.
But it still breaks our hearts and fills them with pain
that our brothers and sisters are so unaware;
too thick to think, and too programmed to care.
Yes we cry and we mourn.
But you ignore us and scorn.

You won’t wonder or ask what caused all this grief.
You just keep living your lives, secure in belief
that nothing can be that bad.
Not even 400 years of slavery, colonialism, and iron clad
Domination by Kufr has made you that sad
And only we Shia can make you that mad.

There are people amongst us who grieve to extreme.
But you grieve not at all, and are too asleep to dream
That a nightmarish death for the Prophet’s close kin,
Brought on by the Muslims is an unforgivable sin,
That rains curses on those who are allied with the perpetrators.
Yet you love those who kill us because we are the demonstrators,
Of the crime that was committed that has brought down the curse.
You’d think killing us is allowed because our lamentations are worse.

It’s hard for you to see the legitimacy of our sect.
You were trained not to be circumspect, not to ponder and reflect
On anything accept what you were taught as law.

Our sect is founded in scholarship that’s deserving of awe.
You take your scholar’s word about what’s right and what’s not.
But with us you’re cautious, acting like our people are part of a plot
But which group is plotting? Whose murdering whom?
Which group of people put prophet’s kin in the tomb?
Our judges can judge by your books and our own.
Your scholars can not, and they teach you that even to listen to us a sin for
which you must repent or atone.

True, it’s a fact that we believe Ali
Would have made a better successor than Aisha’s dad.
But if I lived in those times, though I wouldn’t have been glad,
I’d have been loyal to Abu Bakr. Most of us were.
We didn’t raise much of a ruckus or kick up a stir.

I’d follow Abu Bakr, Omar and Uthman too.
I’d have stayed out of that mess, and away from that goo.
Uthman was slain by murderous men who seemed driven insane.
And the crime that they did was a sin, clear and plain.

But what of those who rose to take the law in their hand;
Who raised ranks of young soldiers to rebel and then stand
Against Ali, the elected leader of the nation?
Is this not a crime; a gross deviation?

But this part of the story was swept under the rug.
Covered like Kufr, all nice, neat and snug.
Who will dare read the story from our point of view?
Or will you laugh and applaud on mechanical cue
Like you’ve been doing?

I, for one, do not see
How anybody knowing the history
Would not wonder about the mystery
Of the alleged legitimacy
Of making war on the governmental agency
Which is supposed to be the last one that was “Divinely Guided.”
How can we be murderously divided
Over such a ridiculously clear point of history?
Why is it such a baffling mystery?

But that’s the real issue, isn’t it?
You don’t know the history. You only know one side of the law.
You hold demonstrations of might in great reverence and awe.
And the ruling class and their bullies are scared that you might link up with us.
Then, you might let loose of some awe, and rethink your trust.

And if enough Sunnis got in sync,
It might cause a stink.
So they made the issue illegal, and you’re too chicken to think,
That the king is un-cool, and a puppet rat-fink,
And his children who hate him are neck deep in the stink.

You’re too ethnocentric to think that mom and dad could be wrong.
Your ego’s real big, but your soul’s not that strong.
I know you love Aisha, a mother of the faithful.
We love Ali, the commander of the faithful.
We recognize Aisha, but we’re trained not to ignore
A wrong when it’s done by even those we adore.

Some Shias act right. Some Shias are wrong.
Some talk polite. Some speak out too strong.

But our views about Ali are based in reason.
So how can it be, that speaking strongly about treason
Committed over a thousand years ago is sane reason
To condemn someone to death?
How could our brothers want to make our mothers bereft
Because some of us say that on Abu Bakr And Umar there’s a curse.
What is worse,
Killing a living human being because of an unpopular point of view (of the misguided very few),
Or being bold enough to express a point of view that doesn’t agree with you?

We’re ostracized and condemned
To excommunication and death
For having a logical historical perspective
That doesn’t agree with a populist point of view.

And that’s all it is; just a historical view.
One school has a view. The other has one too.

A view of the past, impacting on today.
Folks long dead and buried yet you’re unwilling to display
The family linen; fearing those blood spots did not come clean
In the government’s media and historians’ washing machine.

You’re scared that you won’t be able to tell fiction from truth.
After all, you’re only a highly impressionable youth.
You can’t tell wrong from right, or foul from fair.
So you better stay away from us. Don’t you even dare
Read one of our books or hear our Shaykhs preach.

Go to school with those Kafirs,
But don’t let those Shii brothers teach
You anything from their school of thought.
So most of you wouldn’t be caught
Dead with one of us for a friend.
To listen, then reason is a big anti-Shiite sin.

We have good folks and bad.
We have smart folks and dumb folks,
Who can’t even add.

The school where we learned is different from yours.
Is the difference enough to cause destructive wars
That keep us slapping each other like Curly, Larry and Moe?
Is this the Islam that we want to show
To the world? Open your mind.
And resign yourself to the fact that we’re related.
The Prophet of God will be more than elated.