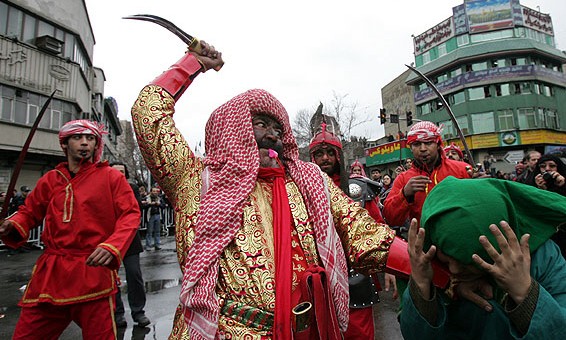 An image from the Battle of Karbala reenactment: A Yazidi solider kills members of the Prophet’s family

In a couple of his public addresses, President Asif Ali Zardari has presented Shaheed Zulfikar Ali Bhutto, Shaheed Benazir Bhutto and himself as followers of the path of the Prophet Muhammad’s grandchildren Hussain and Zainab whose heroic struggle against an unjust ruler Yazid is an important part of Islamic history. In this post, we too refer to a historical example of the same era to describe that in the case of President Zardari, he resembles more to Yazid’s General and Governor Umar ibn Saad than anyone else.

Who is Umar ibn Saad?

Umar bin Sa’ad (620-680) was the son of Hazrat Saad ibn Abi Waqas, one of the revered companions of the Prophet (PBUH). He lived in Kufa. Ibn Ziyad, the governor of Yazid in Kufa told him that a movement had emerged against Yazid in Dalam and he should go there and destroy it. He would be given an army of 4,000 men and after he has destroyed this movement he will be appointed as the new governor of the province of Rayye.

When Umar bin Sa`d was ready to leave, Ibn Ziyad changed his mind and said, “Instead of going to Dalam, go to Karbala where Husain is camping and is trying to mobilize the people against Yazid.”

Umar bin Sa’d said, “If I have to go into battle with Imam Husain then I am not willing to go.” Ibn Ziyad said, “You know that I have appointed you the governor of Rayye. I will suspend you and not give you the governorship of Rayye unless you do as I demand.” Umar bin Sa’d asked for sometime to reconsider his options. He thought very deeply and asked his friends and advisers on what he should do. Deep inside he did not want to fight with Imam Hussain and his advisers also told him not to go as Imam Husain was the grandson of the Prophet and had a very high status amongst all Muslims.

He went to Ibn Ziyad and recited a poem saying, “I am not going to fight against Imam Husain and I do not want your governorship of Rayye but if you send so and so he will go and fulfil your orders.” Ibn Ziyad said, “If you do not want to go then go home, I do not require your advice on who to send or who not to send. I am above you in rank and have greater knowledge on these matters than you do.” When the governor said this, Ibn Sa`d was startled; he began to reconsider his position. Finally, he was overcome by worldly greed and decided to take the post (promised Governorship of Raye) and became in charge of Yazid’s army against Imam Hussain. He got his men ready and left for Karbala.

The ancient state of Raiy in Iran was considered of star value in entire Persia. Since the day Sa’ad Ibne Abi Waqqas (father of Umar Ibne Sa’ad) conquered the Persian kingdom, Umar Ibne Sa’ad was desirous of ruling the state. He said while instigating his self on the assassination of Imam Husain:-“So by Allah, I cannot understand two important things about which I am too worried and bewildered. Should I leave the thought of Raiy, or shall I commit the crime of killing Husain. While his killer will be doomed to hell and nothing can save him, the state of Raiy is the comfort of my eyes.” (Kamil Ibn Aseer, Tabari)

Upon reaching Karbala he met Imam Husain and enquired, “Why did you come to Kufa?” Imam Husain replied, “I came to Kufa because I was invited through letters, messages and personal invitations and now that I have reached here you do not want me to be here.” Ibn Sa`d said that he would write a letter to his governor Ibn Ziyad to see what he would like Imam Husain to do. When Ibn Ziyad received the letter from Ibn Sa`d, he wrote back saying, “Tell Imam Husain to swear allegiance to Caliph Yazid. If he does, then we shall come to an agreement but if he does not then we shall fight with him and his people. We will also stop their supply of drinking water.” Imam Hussain refused to swear allegiance to Yazid. Ibn Sa`ad sent 500 of his men with Umar Ibn al-Hajjaj as their leader. On 7th of Muharram he gave orders to his army to stop Imam Husain and his people from obtaining any water from the river. On 10th of Muharram, he ordered his army to slaughter Imam Hussain and other members of the Prophet’s family (Ahlul-Bayt).

Abu al-Muaali al-Ejli narrated from his father that he said: ‘When Hussain arrived in Karbala, Umar bin Sa’ad was the first individual who cut the ropes of the tents’

Dhahabi whilst writing on the life of Ibn Sa’d states in Siyar Al-Aalam al-Nubla Volume 4 page 349:

“Umar bin Saad, the commander of the troops that fought against al-Hussain [ra], then al-Mukhtar killed him (Umar ibn Saad)”.

A critical study of history of events of Karbala reveals about Umar Ibne Sa’ad that though he obviously was the assassin of Imam Husain, he committed this heinous act under threatening pressure of Ibne Ziyad. Besides, the greed of state at Raiy, was another factor, which instigated him to do what he did. Otherwise he did not wish to be a part of this crime against Imam Hussain and his Shias. But the thoughts and actions of Umar-e-Sa’ad and his submissive obedience to Ibne Ziyad and Yazid are ample proofs that he indeed was a lowly man with mean and base character.

Who is President Asif Zardari?

Asif Ali Zardari (President of Pakistan since 2008) is son in law of Zulfikar Ali Bhutto and widower of Benazir Bhutto. Both Z.A. Bhutto and Benazir gave their life in their struggle against Yazid style military dictatorship in Pakistan and were killed by Yazidis hiding in the Army and Jihadist militant organizations. However, in departure from his father-in-law and wife’s great legacy, Zardari has decided to protect his position of power (President of Pakistan) even though it has to be at the cost of thousands of innocent Shia Muslims, hundreds of Sunni Barelvi and moderate Deobandi Muslims and dozens of Ahmadis, Christians and Hindus. As long as Yazidi army (the mentors and protectors of murderers, ie., Taliban, Sipah-e-Sahaba) are allowing Zardari to sit in the chair of the President of Pakistan, he is least bothered about what is happening to Shias of Quetta, Karachi, Gilgit Baltistan, Parachinar, D.I.Khan, Ahmadis of Sindh and Punjab, Christians of Mardan, Islamabad, Punjab and Hindus of Sindh. Not unlike Umar ibn Sa’ad, Zardari too does not want to be a part of crimes against innocent human beings, however, the love of worldly power and gains has blinded his sense of ethics and justice.