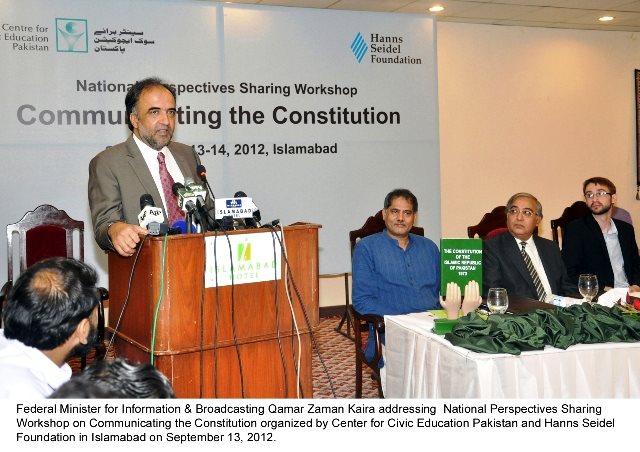 Media in Pakistan rarely applies ‘constitutional filter’ to frame and contextualize vital national issues. The mainstream narratives and popular discourse in the media often privilege “territorial/security” and “religious” over the “republic.” These reportage trends have bearing on transformation of ‘statutory’ into ‘societal.’

There is a history to this as the country experienced unusually high constitutional mortality and remained without a viable constitution for a long. However, Pakistan witnessed a ‘legislative revolution’ in the form of 18th Amendment and further consolidated it through the 19th and 20th amendments during 2010-11. Media by and large either missed these big stories or misreported them and failed to communicate the text and more importantly context of these constitutional changes.

In a democratic society constitution is revered as sacred document and a social contract between the citizens and the state that bestows rights to the citizens, institutions to the nation and legitimacy to law and elected government.

In order to analyze and examine how media communicate the Constitution and evolve policy recommendations the Centre for Civic Education Pakistan in collaboration with Hanns Seidel Foundation arranged a two-day Perspectives Sharing Workshop with media professionals in Islamabad on September 13-14, 2012.

The objectives of the workshop were: — to enlist and examine various trends of reportage about the constitution in print, electronic and social media, to discuss and debate policy options among stakeholders and to focus on knowledge and skills for improved reporting.

In his opening speech, the chief guest, Minister for Information and Broadcasting, Qamar uz- Zaman Kaira, pointed out the extreme importance for the implementation of the ideas brought forward in the 18th amendment into political reality. This endeavor of enforcing the constitution would have to be accompanied by a thorough and thoughtful media communication going beyond a mere coverage.

Qamar Zaman Kaira said that the process of educating the people about Constitution, their rights and responsibilities should be continued with an aim to develop and concrete our system.

He said in the past, a dictator termed the Constitution a piece of paper and defaced it by introducing unilateral amendments in it but the present government has restored it in its original form with consensus of all political forces.

Kaira said that through 18th Amendment and 7th National Finance Commission Award the provinces have been empowered and national resources have been diverted to them. The PPP regime was trying to empower the federating units despite criticism from some quarters that the provinces did not have the capacity because we believe that when they will be empowered, they will develop capacity.

He expressed the pleasure that the public awareness and debate is going on about the Constitution and this process has to be made more practical and strengthened.

He said the relationship between a person and constitution and their responsibilities and the state institutions have been well defined and there was need to create awareness about it.

The minister said that democracy is like flowing water and whenever the democratic dispensation is toppled, it results in stagnation of the society.

Kaira condemned the imposition of dictatorship in the country which has weakened the federating units while the centre was stronger and it inflicted enormous damages to us.

The Information Minister said that the absence of a constitution during the dictatorial regimes was responsible for all of our today’s difficulties because they broke the relationship between the state and its citizens. In dictatorial rules, basic human rights are suspended and a single person has authority to make decisions about the country.

Kaira said it is the reflection of a democratic set up where our own governments and parliamentarians sometime criticize us and we have to develop the habit to listen to all.

He said there was a time that Supreme Court allowed amendments in the Constitution on the name of necessity doctrine and such steps denied the basic rights of the people.

Kaira said that the present government has the credit to bring changes in the Constitution with the consensus of all stake holders and now they are demanding their rights, which is obviously strengthening our country.

He said we want to eliminate the sense of mistrust on the federation by its federating units.

The minister appreciated the Centre for Civic Education Pakistan and its partners for arranging workshops and seminars for promoting awareness on constitutionalism among the masses.

About Balochistan, he said that there was unrest but the government has taken several steps to address their grievances.

He said that 18th Amendment Bill and Aghaz-e-Haqooq-e-Balochistan introduced by the PPP regime could not have the desired results but we should think what would have been the situation there if they were not introduced.

Dr Syed Jaffar Ahmad, in his research paper titled ‘Communicating the Constitution’, highlighted how a significant segment of our political class had not fully realised that “instead of and laying down the parameters of national political discourse itself, it has left it to the media to decide the subject matter and the direction of the political discourse in the country.” Identifying certain trends in media which needed examination, he talked about the gradual erosion of the correlation between constitutionalism and the pursuits of media – a correlation which defined our democratic struggle in the past.”

During the workshop, the participants, which were made up of renowned journalists from all over Pakistan and students from different universities engaged in a fruitful dialogue about different aspects of the Pakistani constitution. One of the findings was, that the ideas of the constitution would have to be better communicated in national school and university curricula. In that, the media should play a crucial role. The participants also agreed on the important role of the media in communicating the mere existence of the constitution to a broad public, and in showing that this constitution was not a matter of the elites. Also, journalists should more focus their efforts on providing in-depth analysis instead of reproducing politicians’ arguments in an unreflected way. 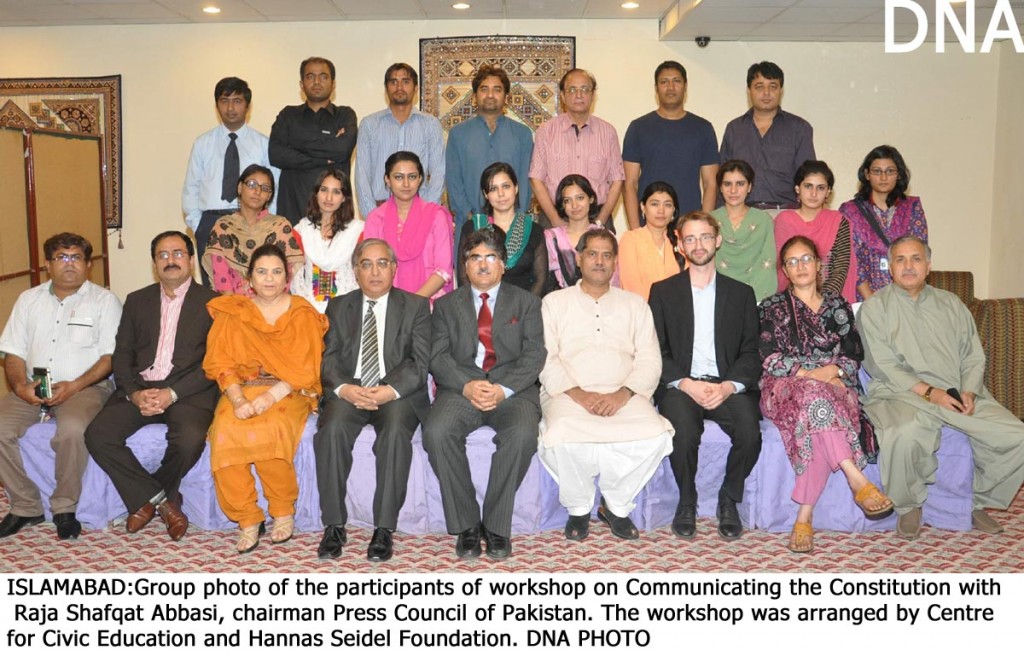 Chairman Pakistan Press Council Raja Mohammad Shafqat Khan Abbasi endorsed the suggestion made by the participants of the two-day workshop that efforts should be made to declare April 10 as the Constitution Day of Pakistan.

The national perspective sharing workshop ended with a set of recommendations for media organizations to prepare a code of ethics which could help frame issues in the light of the constitution and cultivate a culture of media monitoring.

Speaking as a chief guest at the workshop Raja Shafqat suggested all political parties to hold study circles for creating awareness about the constitutional issues among its workers and leaders. “We thank the current government for cleansing the constitution from dictatorial provisions,” he said adding that political parties had a major role to play for the promotion of civil liberties.

Earlier, Jami Chandio made a detailed presentation about the different constitutions Pakistan had since its inception and also highlighted the salient features of all the constitutions. “After 9 years of its inception Pakistan got its first constitution in 1956 in which it became for the first time Islamic Republic of Pakistan,” he said adding that it was not a legitimate document as such as it later resulted in merger of all the provinces of West Pakistan as One Unit. “The good thing about this constitution was that it declared the country as federal in nature.

At the same tme there was a flaw in it as it proposed no senate or upper house,” he said adding that the concept of a federation without a senate was at best ridiculous. Chandio pointed out two notions typical of all military dictators as to how to save Islam and how to encroach upon the constitutional sphere. “The 1962 constitution was almost solely framed by General Ayub and the federal form of government was turned into a presidential form of government,” he said referring to the 1973 Constitution as the only democratically framed constitution. “It (1973 Constitution) made Pakistan bicameral. The institution of senate was established where provinces are represented irrespective of their population,” he said. After passage of the 18th amendment three positive things happened.

Andreas Duerr Program Coordinator with Hanns Seidel Foundation thanked all the participants of the workshop and on behalf of the Foundation resolved to continue support for creating a civic culture in Pakistan.

Zafarullah Khan, Executive Director of CCEP, underlined the need for media to comprehend, contextualise and communicate the constitutional processes in a way that restores the trust of the people in those processes.

3 responses to “Communicating the constitution”