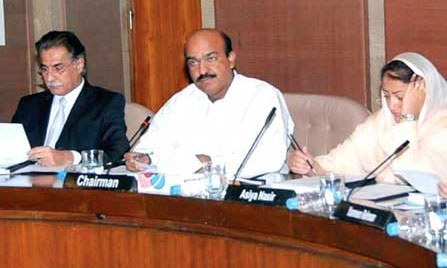 ISLAMABAD: The National Accountability Bureau on Thursday revealed to the Public Accounts Committee (PAC) that the GHQ had re-entered into active service three retired generals involved in the mega billion National Logistic Cell (NLC) scam to initiate their court martial.

The revelation came during the PAC meeting on Thursday presided over by Chairman Nadeem Afzal Chan.A NAB official at the meeting said GHQ would probe the retired generals involved in the scam while NAB would probe the civilian officials. He said while the GHQ had previously been uncooperative with NAB with regards to sharing records, an agreement had now been reached, after hectic efforts by NAB Chairman Admiral (retd) Fasih Bokhari, and records would be shared. “On Wednesday, the Adjutant General of GHQ visited the office of the Chairman NAB and during the meeting it was decided that the GHQ will share the record with NAB,” the official told the PAC mereting.

It is to be mentioned here that the Audit Department had reported to the PAC that NLC had obtained Rs4.3 billion loans from banks between 2004 and 2008 for investment in volatile bourses and suffered Rs1.84 billion losses. Moreover, NLC was also paying Rs2.7 million per day as markup on loans illegally obtained to invest in the stock market.

The NAB official Thursday told PAC that Chairman NAB had held three meetings with the Chief of Army Staff General Ashfaq Parvez Kayani on the issue of the NLC probe.

The PAC Chairman has directed the PAC secretariat to write a letter to the Secretary Ministry of Defence to seek an update on the NLC case and submit a report within 15 days.

PAC’s PPP member Yasmeen Rehman was astonished that records had not been given to NAB after the passage of a whole year, while PAC member Sardar Ayaz Sadiq questioned why the amount had not been recovered from the accounts of civilian officers of the NLC. The NAB official responded that since they had no access to the record, no steps could be taken.

In the audit paras on NLC, officials had pointed out that the contract appointment of the Chief Finance Officer in the Chief Executive’ Policy guideline resulted in irregular expenditure of Rs1.8 million in 2005-06. Interestingly the Chief Finance officer was Saeedur Rehman, the prime accused in the NLC scam.

Meanwhile, Director General NLC Maj Gen Junaid Rehmat said it was important to determine the status of NLC and see if it was an army department or came under civilian purview. He told PAC that NLC got permission from the Chief of Army Staff and the Ministry of Defence to start exercises to determine its status.

The DG NLC also apprised the PAC that NLC had paid back all its debt of Rs9 billion to the banks and was now a debt free organisation. “We earned a profit of Rs3 billion in the last financial year,” he added.

PAC member Sardar Ayaz Sadiq asked whether the income of NLC was taxable, to which DG NLC said the organisation’s activities relating to emergency services were not taxable but commercial activities were.

PAC member Sardar Ayaz Sadiq asked whether the income of the NLC was taxable, to which DG NLC informed that the organization’s activities relating to the emergency services were not taxable but the commercial activities are taxable. “Our status is yet not determined so we are supposed to keep two accounts,” he added.

PAC member Hamidyar Hiraj inquired whether NLC still carried out the Afghan Transit Trade at which DG NLC responded that this had not been the case since July 2011. He said after the new agreement between Pakistan and Afghanistan on Afghan Transit Trade, Afghan trucks took the goods from Port and Wagah.

Meanwhile, Chairman PAC also directed Javed Malik, Secretary Ministry of Planning and Development, to send a report to the PAC explaining whether the rules of Public Procurement Regulatory Authority (PPRA) were violated by NLC while sub-letting the contracts.

On the monitoring of the construction of Gwadar port, the Chairman PAC asked the PAC secretariat to arrange the meeting on Gwadar at Gwadar next month and directed that the secretaries of Ministries of Port, Communication and Shipping and Planning and Development as well the Chairman NHA attend the meeting.