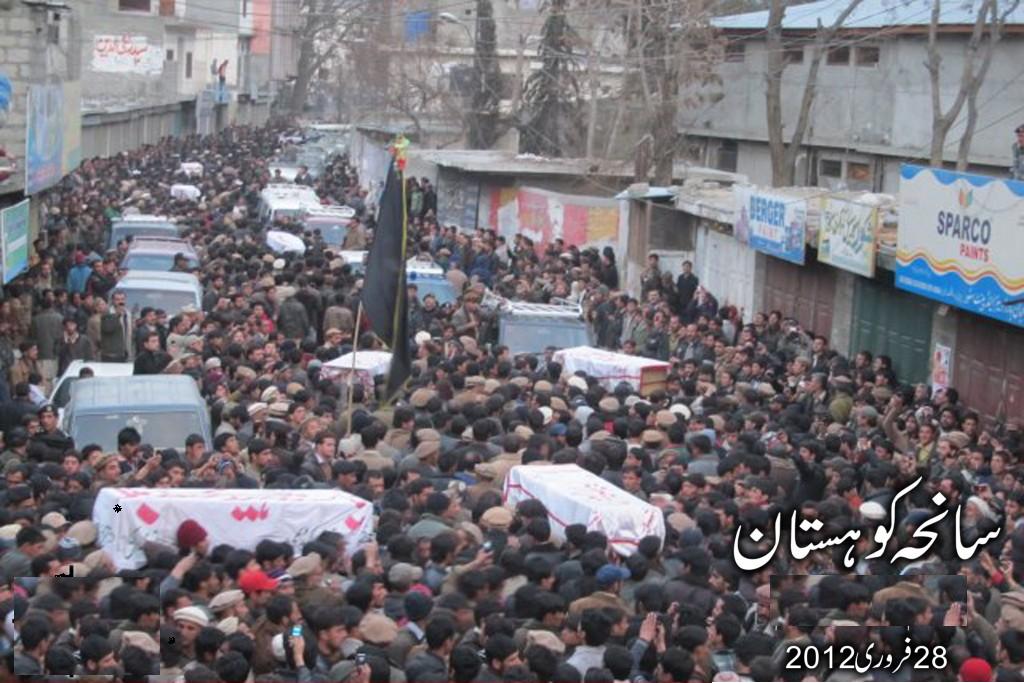 UK 21 August 2012. Despite what is happening to Muslims in Pakistan, many people still regard Islamic Republic of Pakistan as a ‘Fort of Islam’. When this ‘Fort of Islam’ was established in 1947 after division of the British India on religious lines, it resulted in death of around one million of innocent people and many millions were uprooted, as there was no planned transfer of people from one country to another. The ‘fort of Islam’ – Pakistan was supposed to provide protection, self – respect, economic prosperity and dignity to its citizens.

Over the years the land of pure has become ‘purer’ by either driving out non – Muslims or killing them. Some groups in name of Islam kill innocent people; and when they could not find more non-Muslims to kill in their locality they, in order to ‘purify Islam’ turn their guns towards Muslims belonging to other sects in Pakistan.
Pakistan is not the only country where Muslims are under attack; they are under attack in many other countries as well. In Pakistan, because of wrong policies of respective governments, Pakistanis – Muslims and non – Muslims have been under attack for decades; and policies of injustice and oppression culminated in death of millions in East Pakistan and loss of East Pakistan where majority of Muslims lived.

Sad thing is that the ruling elite of Pakistan chose not to learn anything from their blunders, and they continued with their wrong policies. Result of this is that Pakistan, a country established in name of Islam and for the betterment of Muslims, has to use its air force to kill Muslims; and no one feels safe there. In areas where the Pakistani government cannot kill some Muslims who were established, nurtured, trained and armed by them, they have allowed America to use drones to kill those Muslims.

Pakistani Hindus are also victims in Islamic Republic of Pakistan, and they have been at the receiving end since the creation of country. After loss of East Pakistan, a large number of Hindus became part of Bangladesh; and those who had to live in Bhutto’s Pakistan had to endure suffering. It is unfortunate that these Hindus see no future in Pakistan where they are not safe and are not regarded as Pakistanis, and many of them decided to leave Pakistan and start a new life India, perhaps with new problems.
I was discussing the situation of Pakistan in London with some like – minded people. One Pakistani said perhaps Hindus have a choice to leave Pakistan and go to India, but where do Muslims go, as they are also not safe in Pakistan. Another participant said these Hindus will also face problems in India, as secret agencies of India will suspect them of being ISI agents; and the local people might not be that welcoming either.

It is disturbing to note that many people in Pakistan, Azad Kashmir and Gilgit Baltistan either stay quiet on these events or hold others responsible for all the ills of Pakistan and sectarian killings. Other countries also have interest in Pakistan and in this region; partly it is in response to policies the Pakistani government have been espousing for many decades with disastrous consequences for Pakistan and other countries.

Although Islam preaches peace unity and tolerance, but we need to acknowledge that it is a war within Islam. It is a war of one sect of Islam against the other. They are fighting for domination of their sects and for total elimination of the other. These sects are supported by many countries including Pakistan, Iran and Saudi Arabia. The result of this sectarian war is total chaos in Pakistan, where no one feels safe and the entire society is influenced by sectarian sentiments

On the recent sectarian killings, Pakistan’s popular English daily ‘Dawn’ said: ‘The Mansehra attack had a particularly disturbing aspect to it, with passengers made to show their identity papers and those suspected of being Shia, on the basis of their names or tribal affiliations, being picked out and killed. Like other recent sectarian killings in Balochistan, Kohistan and Orakzai, the approach used resembled ethnic cleansing in its chilling focus on identifying and killing innocent citizens simply because of their membership to a particular community….The state needs to demonstrate what it is doing to combat this threat. If not, Pakistan may as well give up any pretence of being a state for anyone other than its majority religious community’.

Many Kashmiri ‘nationalist’ are programmed to attack India for human rights violations, and they tend to remain quiet when human rights abuses take place in Pakistani occupied areas of Jammu and Kashmir. However, Raja Basharat Khan, President of Kashmir National Party (KNP) Birmingham Branch, strongly ‘condemned the brutal murder of 19 innocent people in Gilgit Baltistan in the name of religion and appealed to all political forces in Pakistan Occupied Gilgit Baltistan region to speak with one voice without any reservation to condemn the Pakistan sponsored religious militant groups involved in fanning sectarianism and killing of innocent people in Gilgit Baltistan’.

He further said: ‘Despite claims of some banned religious outfits who publicly take the responsibility for these horrific crimes against humanity in occupied Gilgit Baltistan, no action has been taken against these terror groups which prove that the Pakistani authorities are giving them a freehand. KNP, along with other Kashmiri organisations and political parties, have constantly been protesting on these crimes against humanity and have been demanding that the Pakistan government must take stern action against the perpetrators but no steps have been taken so far by the Pakistan government to stop the violence which is pushing Gilgit Baltistan towards a civil war’.

As a tradition has it, we Muslims, instead of acknowledging our mistakes, negligence, inefficiency and lack of planning, try to find conspiracy in everything; and accuse Hindus, Jews and America for our failures. This mind – set has to change if we want to resolve our problems and make some positive contribution to the world society.
During my last visit to Gilgit I urged the youngsters to exercise restraint who were angry about the State sponsored oppression and sectarian violence, especially deliberate and well planned victimization of the Shia community. I said to them if you resort to violence it would provide an excuse to the authorities to crush your struggle. However, the question is for how long they will swallow every bitter pill coming their way. For how long they will continue to suffer and remain quiet.

Authorities in Islamabad need to understand that Gilgit Baltistan is not a Pakistani territory; and there are other countries which have keen interest in it. This region is not only full of natural resources; but it also has a great strategic significance. It would be foolish to fan sentiments of hatred and continue with old policies of oppression and sectarian cleansing, as it needs only one spark to ignite the fire, and there would be many there to ensure that it continues to burn.

There is a saying that ‘those who do not plan their lives, others plan it for them’. It is obvious that when others plan it, they plan it according to their needs and intersects. A message for Pakistani government is that if you don’t put your house in order and make some planning for a better future, others will have to step in to put things in order and plan things; and they would do that according to their requirements and interests.