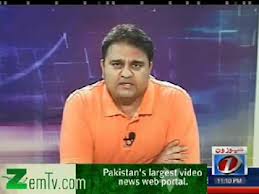 Fawad Chaudhary: His Criticism of the Judiciary stands vindicated

In a continuing series of interviews, the most recent of which was last night’s (August 13th, 2012) interview with right-wing idealogue and Chief Justice supporer, Muhammad Malick, Senator Faisal Raza Abidi continued to build his case against the Islamofascist, Pro-Rape Chief Justice.   Muhammad Malick’s, in typical partisan mode, did his best to derail any criticism of the Chief Justice and the massive allegations of corruption, cronyism, favoritism and misuse of public funds against CJP, his son and the Supreme Court Registrar.

Senator Faisal would have none of it and in his typical blunt fashion, meticulously built upon the growing public frustation with a politisized and biased judiciary that is hell bent upon annexing the role and function of the Legislature (Parliament) and Executive (Prime Minister). While this Judiciary’s extra-Constitutional dictats have been critisized by respected jurists and legal experts in Pakistan and the rest of the Democratic world, his Jaanisaris (Loyalists) in the media and legal community continue to disgrace their respective professions in their unprincipled rabid support for this PCO Judiciary.  A PCO Judiciary which continues to resort to those controversial, selective and vague clauses of the Constitution that were inserted by military dictators like General Zia ul Haq and General Musharaf. When Pakistan’s partisan media and  urban elites trumpet their alliance with this Judiciary, they use grandiose excuses such as:

LUBP requests Senator Abidi, Sharjeel Memon and Fawad Chaudhary and other PPP media reps to respond with the following:

“Yes, you stand with the Law of dictators like General Zia and General Musharaf. The Contempt Ordinance  of 2003 used to Un-Constitutionally disqualify Prime Minister Yousuf Raza Gillani and threaten current Prime Minister Raja Pervaiz Ashraf was the handiwork of General Musharaf just as Article 63 is the work of General Zia and these are the favourite clauses of this Judiciary as it seeks to undermine Democracy in Pakistan to further its agenda of un-fettered power over all institutions”

When PPP representatives are accosted with malicious accusations that they are not following the Dictat of this Judiciary, they should immediately cite the example of how the Judiciary sent a popular elected leader, Shaheed Zulfiqar Ali Bhutto to the gallows. The nation still has not recovered from that.  This is a prime example to the Jamaati media anchors and their pseudo-liberal cheer leaders that the Dictat of the Judiciary needs to be questioned and the PPP must not succumb to the advice of CJP loyalists like Aitzaz Ahsan.

The most damning indictment of the Chief Justice was his misuse of Building loans towards meeting the lavish wedding expenses of his son, the controversial “Dr.” Arsalan Iftikhar.  In another one of his politisized comments, the Chief Justice had declared that he had secured Rs. 10,000,000 as a loan from the House Building Finance Corporation (HBFC) towards meeting the wedding expenses of his son.  The actual expenses of the lavish wedding are alleged to be upwards of Rs. 30,000,000!!

Yes, dear readers, this is the same Judiciary that abuses the elected leaders of the Pakistan People Party (PPP) on the basis of unproven corruption allegations. This is the same Judiciary that has hounded the family of former Prime Minister and PPP stalwart, Yousuf Raza Gillani by collaborating the the Saudis and the military establishment in making politically motivated cases against MNA Abdul Qadir Gillani and MNA Ali Musa Gillani.  Another elected PPP leader, Maulana Kazmi has been incarcerated without bail for nearly two years on related unproven charges.

This is why the public is appreciating the bold stance of Senator Abidi and other PPP leaders and representatives like Sharjeel Memon and Fawad Chaudhary.  By some estimates there are over 2,600,000 pending cases in the lower court which are in dire need of Judicial Reform.  This is the reason why there is a clear divide between Pakistan’s public which has voted in the PPP and Pakistan’s media, civil society/life style liberals, legal community elites and Jihadi-sectarian/Islamist Right Wingers (PML N, PTI).  The people of Pakistan want a solution to their day to day problems and hold their elected representatives accountable on real issues such as load shedding and inflation. They do not want a Judiciary that is bent on derailing the PPP-lead elected Government.

In this regard, Senator Abidi’s exposure of PCO Chief Justice on his double standards in freeing Lashkar-e-Jhangvi (an Al Qaeda affiliate terrorist organization) chief, Malik Ishaq, must be appreciated. It was disgusting to see ideologue/anchor Muhammad Malick attempting to first shift the blame on the Government and then feign ignorance on this issue. Disgusting but not surprising.

International observers who are witnessing this must realize that the much trumped binery between the right-wing Urdu medium press and the (pseudo) liberal English press is an artificial construct. In reality no such binery exists. Until very recently, pro-establishment hack Najam Sethi was one of this Judiciary’s chief supporters and smugly reminded his readers and audience that “civil society” was with this corrupt, Islamofascist Judiciary.  In the last week or so, after Senator Abidi/Sharjeel Memon/Fawad Chaudhary’s unrelenting public service efforts to highlight this judiciary’s corruption and double standards, Najam has typically changed his tact and is more circumspect on this issue.  This should be a signal to his urban flatterers that their beloved Judiciary might finally be held to account for their crimes of corruption, nepotism and ommission. 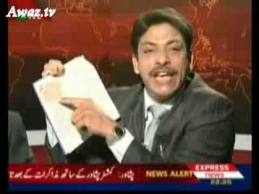 Certainly, Pakistan’s Ahmadi, Shia, Hindu, Christains, Baloch and Pashtun would be less willing to participate in the urban upper-middle class hero worship of the glorified bureaucrats that compromise Pakistan’s Judiciary.  The rest of the nation also wants relief from this judicial activism in favour of Pro Taliban parties like PML N and PTI. Pakistan needs to hold its Un-Elected Institutes (Judiciary and Army) accoutable by the elected representatives of the people, the Parliament and Executive.