Home  »  Newspaper Articles   »   Breaking the Arab News: Al Arabiya and Al Jazeera have lowered their journalistic standards in their coverage of Syria – by Sultan Al Qassemi 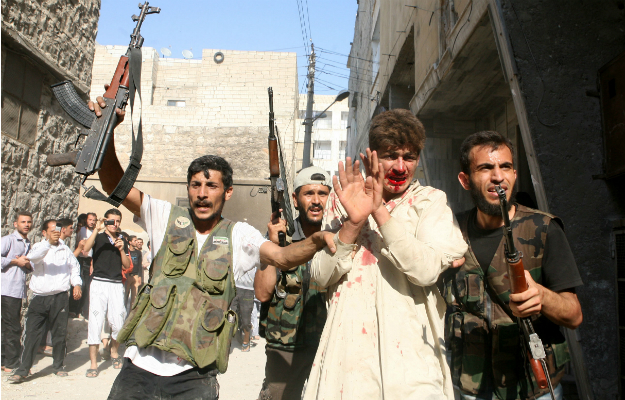 While civil war rages on the Syrian battlefield between regime loyalists and myriad rebel factions, another battle is taking place in the media world. Al Arabiya and Al Jazeera, the two Gulf-based channels that dominate the Arabic news business, have moved to counter Syrian regime propaganda, but have ended up distorting the news almost as badly as their opponents. In their bid to support the Syrian rebels’ cause, these media giants have lowered their journalistic standards, abandoned rudimentary fact-checks, and relied on anonymous callers and unverified videos in place of solid reporting.

Al Jazeera and Al Arabiya were founded by members of the Qatari and Saudi royal families, respectively, and their coverage of Syria faithfully reflects the political positions of their backers. There’s big money behind both stations: Al Jazeera was created with a $150 million grant from the emir of Qatar in 1996, and annual expenditure on the network’s multiple channels reached nearly $650 million by 2010, according to market research firm Ipsos. The story is similar with Al Arabiya, which was launched in 2003 with an initial investment of $300 million by a group of Lebanese and Gulf investors led by Saudi businessman Waleed al-Ibrahim, the brother-in-law of the late Saudi King Fahd. Hard numbers on the annual operating budgets of these channels aren’t known, but they’re likely to run into the hundreds of millions of dollars. The much smaller, U.S.-government financed Alhurra, by way of comparison, costs around $90 million annually to run.

Coverage of the Syrian uprising has drained these channels’ resources. Prime-time advertisements have been reduced or canceled altogether, thereby decreasing revenues. In place of carefully reported segments, some newscasts rely almost exclusively on citizen journalist “eyewitness” accounts and uploaded media footage readily found on YouTube. For the non-Arabic-speaking viewer, news coverage of Syria on these channels is akin to CNN’s iReport — the monthly interactive half-hour citizen journalism show — but for several hours a day. It is not uncommon to tune in to either channel and find that the first 20 minutes of a newscast consists of Syrian activists — some with shady backgrounds — based either outside or inside Syria reporting via Skype on events that took place hundreds or thousands of miles away.

When Al Arabiya and Al Jazeera do comment directly on Syrian affairs, they tend to paper over the rebels’ flaws and emphasize the conflict’s religious fault lines. Perhaps the low point of both channels’ Syrian uprising coverage was when they gave a platform to extremist Sunni cleric Adnan al-Arour, who once said of Syria’s Alawite minority that Sunnis “shall mince them in meat grinders and feed their flesh to the dogs” for their support of President Bashar al-Assad. While Al Arabiya referred to “the sheikh” as a “symbol of the revolution,” Al Jazeera introduced him as the “biggest nonviolent instigator against the Syrian regime.”

These Arabic-language stations have done their worst work when the political stakes of their coverage are the highest. In early July, Brig. Gen. Manaf Tlass, a close friend of the Assad family and son of a former Syrian defense minister, fled to France. Several weeks later, he broke his silence via Saudi media and embarked on a religious pilgrimage to the kingdom, offering himself as a unifying figure to lead Syria’s dysfunctional exile opposition. Only within the realm of fantasy would Syrians — who have paid with the blood of thousands to bring down the Baathist dictatorship — agree to allow a former regime insider to succeed Assad.

But that seems to be the scenario that Al Jazeera and Al Arabiya are not only taking seriously, but perhaps supporting. Both channels initially covered Tlass’s defection extensively, but after Tlass chose to make his statements exclusively to Saudi media — including Al Arabiya and the newspaperAsharq al-Awsat — Al Jazeera shunned him. Al Arabiya described the defection of Tlass — who held no power whatsoever at the time of his departure — as a “severe blow” to Syrian military power. It also recounted how several of his family members oppose the regime, but failed to mention his uncle Talal, who currently serves as deputy defense minister.

To be sure, reporting from inside Syria is perilous. The country is, in fact, the most dangerous place in the world for reporters, according to the Committee to Protect Journalists. Bloggers and journalists have been repeatedly detained by the regime since the conflict began, and at least 18 journalists have lost their lives in the country since November. Furthermore, government minders continuously accompany reporters who are allowed into the country.

But the networks use the very real challenges of reporting from inside Syria as an excuse to avoid stories that challenge their preferred narrative. Elsewhere, for instance, articles have raised questions about the credibility of the widely quoted Syrian Observatory for Human Rights, a London-based Syrian opposition outlet — but Al Jazeera and Al Arabiya haven’t touched the story. Newspapers around the world have also focused on the presence of terrorist groups, including al Qaeda, among the anti-regime fighters — but such a possibility is rarely, if ever, entertained on the main Arabic stations.

Both channels also suffer from a “Yasir Arafat” dichotomy — a reference to the late Palestinian leader, who had a habit of tailoring his message depending on his audience. The stations’ rhetoric differs greatly depending on the language they broadcast in. For instance, Al Jazeera Englishand Al Arabiya’s English-language website have broached the topic of al Qaeda fighters in Syria, even as it goes unmentioned on their vastly more influential Arabic-language counterparts. Instead, the Arabic-language channels continually host guests who refute any suggestions of the sort.

Al Jazeera and Al Arabiya are not unique in compromising their journalistic standards in Syria. Western media organizations such as the Guardian were fooled by an author claiming to be a gay girl in Damascus — and who turned out to be an American man living in Scotland. The BBC World News editor also criticized the sensationalism of initial reports of a massacre in the town of Houla, writing, “it’s more important than ever that we report what we don’t know, not merely what we do.”

Of course, the other side has been just as bad. Iranian propaganda outlets recently stepped up their defense of Iran’s Baathist ally, publishing a series of articles that accuse Qatar of financing terrorism and colluding with Israel. Such Iranian media attacks had commonly targeted the Saudi government but are a new phenomenon with regard to Qatar, with which it shares the world’s largest gas field. Russia Today, in both Arabic and English, has mirrored Iranian state media outlets in it coverage, referring to any anti-regime protesters as terrorists or militants, while turning a blind eye to the regime atrocities. Like Iran, Russia Today has also targeted Qatar, accusing it of “playing in tune with Washington’s policies in the region.”

But the real loss here is for Al Jazeera, a channel that was followed by tens of millions of Arab viewers last year at the height of the Arab uprisings and is today a shadow of its former self. After Iwrote about the station’s bias in favor of Egypt’s Muslim Brotherhood last month, more than a dozen of the channel’s employees confirmed the fact to me in emails.

Al Jazeera employs the same tactics in its coverage of the Syrian branch of the Muslim Brotherhood, which is a part of the domestic opposition movement, as it does with the Brotherhood’s Egyptian counterpart. Arabic-language Al Jazeera had earlier assigned its Syria desk to Ahmed Ibrahim, the brother of Anas al-Abdah, a member of the Muslim Brotherhood-dominated Syrian National Council (SNC). Ibrahim goes by a different name in order to avoid being affiliated with his brother. As a result of this relationship, according to several Al Jazeera insiders, Brotherhood-friendly analysts are frequently invited to air their views. For instance, SNC member Mohammad Aloush, afamiliar guest on Al Jazeera, published a long op-ed on the channel’s website stating that the new Syrian Muslim Brotherhood covenant is a “message of assurance” to the Syrian people and that “nothing better has been presented.”

Fortunately, criticism of Al Jazeera and Al Arabiya has increased along with its biased coverage. Fadi Salem, a Dubai-based Syrian researcher specializing in media, accused both channels of “pay[ing] handsome amounts of money to anonymous callers with information regarding Syria” and recycling YouTube videos as if they were from different parts of the country. “Many opposition figures [who are inside Syria] but do not see eye to eye with Saudi or Qatari foreign policy on Syria are ‘banned’ on both channels,” Salem told me.

A large segment of Al Jazeera’s and Al Arabiya’s audiences, appalled by the Syrian regime’s brutality, no doubt genuinely believes that this is strictly a battle of good versus evil. For the Saudi and Qatari governments, however, Syria’s fate directly affects their political future — they want to see the fall of the regime for either personal or strategic reasons. The looming end of Assad’s Syria is yet another chapter in the transformation of the old Arab state order, which began with the fall of Saddam Hussein’s Iraq and the end of Hosni Mubarak’s Egypt. It is a story that is simply too important to be left in the hands of media outlets looking to advance their own narrow interests.